Discover all you need to know about 5Card Draw, the basic rule to the game and some strategy to get you winning in this classic poker format. 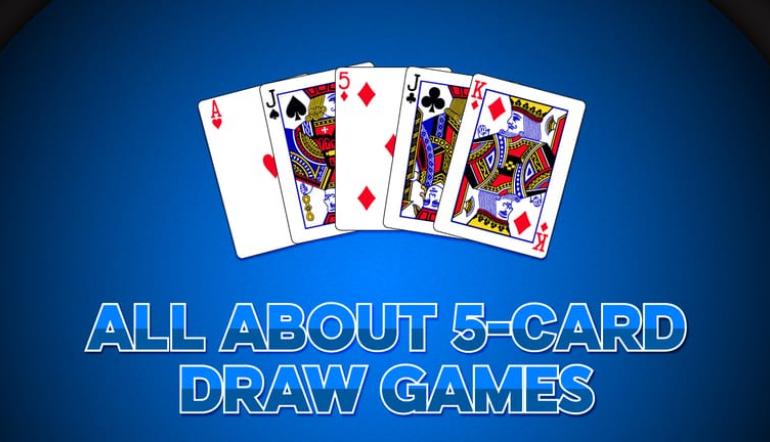 Five Card (5 Card) Draw is a draw variant of poker. In other words, players will hold and discard cards, which are replaced by cards in the deck.

In draw variants, players may discard cards from their hand and replace them with cards from the deck. The draw typically occurs before each betting round(apart from the first), but this amounts to only one drawing round in Five Card Draw.

In this guide, we’ll check out the hand names and values as well as the primary strategy behind 5 Card Draw.

5 CardDraw uses the standard high card ranking system that is employed in other variants such as Hold’em.

Here is a quick recap:

Check out a full explanation of how to play these hands here.

There are two ways to win the pot.

Making hands in Five Card draw is more straight forward than in any other poker variant.

Players always have precisely five cards in their hand at any given moment. We do not need to worry about combining hole cards with community cards like we do in games such as Omaha and Hold’em.

Our hand is always the exact five cards we have in front of us.

There are only two betting rounds in Five Card Draw, and we can distinguish between them using the terms “pre-draw” and “post-draw”.

Each player is dealt 5 cards face down. The pre-draw betting round begins starting with the player to the left of the big blind and proceeds in a clockwise direction.

Once all the pre-draw betting is complete, players now decide regarding which of their cards they would like to discard.

Players can discard any number of their hole cards, including all five. If players wish to keep their current selection of five cards, they have the option to “standpat” which means to draw nothing.

Starting with the small blind and proceeding in a clockwise direction, players announce how many cards they are discarding and draw the equivalent number of cards from the deck. If (in the rare occurrence that) the deck runs out of cards, the discarded card pile can be reshuffled and treated as a fresh deck.

There is now a final betting round that takes place based on the strength of each player’s hand along with the newly drawn cards.

Once the post-draw betting action is over, players reach showdown. That’s right; there are only two betting rounds in Five Card Draw. Players reveal the strength of their five-card hand and the pot is awarded to the strongest.

The betting options are identical in the majority of poker formats.

Here is a quick recap of the legal options:

Usually, when our opponent elects to stand-pat, it indicates that he has a strong 5-card hand, otherwise why would he not choose to draw?

Caution needs to be exercised, however, since the line can also be used as a bluff. Imagine we are dealt an extremely trashy hand to the point where we would consider redrawing four or even five of our cards.

Rather than draw hopelessly, we have the option to stand pat and represent we were dealt a big 5 Card hand out of the gate.

The draw is an integral part of Five Card Draw. We should not only think carefully how many cards it makes sense to draw but also observe our opponents to see how many cards they are drawing from the deck.

The number of cards they choose to draw indicates the potential strength of their holding. For example, drawing one-card typically means either a straight-draw, flush-draw, or two-pair type holding.

Five Card Draw is not an especially standard offering in the online world so the betting structure may vary.

No Limit – Players can bet any amount at any time. This betting structure has become more popular online in recent times.

Pot Limit – The maximum allowable bet or raise is the size of the pot.

Fixed Limit – Betting occurs in fixed increments. This setup is the most traditional betting structure for Five Card Draw.

It would also be possible to modify 5 Card Draw into a 5 Card Triple Draw by adding two betting rounds and draws.