The Ultimate Guide to Raising and Re-Raising in Poker

Follow along as we delve into the world of re-raising. We’ll look at the 2bet, 3bet, 4bet and re-raising strategy along with much more on this topic. 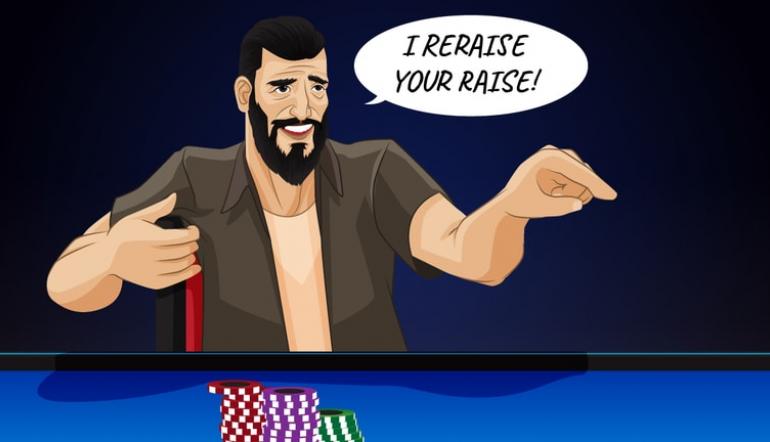 Raising in poker is art. Although it may seem like a very straightforward process, the size and timing of a raise are crucial in determining how successful it will be. In particular, when we bet is something that beginners have trouble with implementing.

In this article, we will delve into a complete discussion on the topic of re-raising in poker.

The following areas will be considered.

What does it mean to re-raise in poker?

Why is re-raising important in poker?

When re-raising is illegal

What is a limp re-raise?

What is a back re-raise?

Strategy: When is re-raising good?

Strategy: Which raise sizing should I select?

What does it mean to re-raise in poker?

Re-raise à To raise after a raise has already been made on the current street.

Player A bets.
Player B raises.
Player A re-raises.

Sometimes the terms, raise and re-raise are used, interchangeably, as will be discussed in the section Terminology: “raise” vs “re-raise”.

Why is re-raising important in poker?

Regulating the size of the pot is one of the most essential skills in poker (regardless of the variant). The primary goal of a good poker player is to build the pot when he is likely to make a strong hand but limit the size of the pot with mid-strength and weak holdings.

While naturally being a rather simplistic overview of the game, understanding this concept of optimum pot size leads to surprisingly accurate decisions in the majority of poker scenarios.

Raising/re-raising is one of the primary tools when looking to grow the size of the pot. Without the option of re-raising, poker players would struggle to reach their ideal pot size for each hand, which would stunt their overall winrate.

The exact amount will depend on the betting structure of the game in question.

There are three primary betting structures -

In fixed-limit games, there is only one re-raise size that can be employed, so this, naturally, also constitutes the maximum raise size. The designated re-raise size will depend on the street (betting round); it will either be the small bet or the big bet. (All fixed limit games have at least a small bet and a big bet sizing).

No Limit and Pot Limit games have the same rules for minimum re-raise sizings, regardless of the variant in question.

Basic re-raise rule à  Our raise must be at least the size of the previous re-raise. 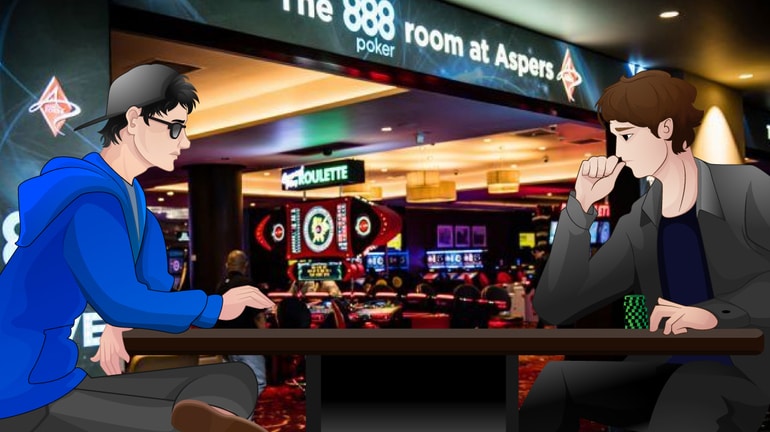 If Villain raises our bet by 8bb, our minimum re-raise sizing will be an extra 8bb on top of that.  This might seem straightforward but has the tendency to create confusion.

A common misconception is that our new bet size needs to be at least twice the size of the previous bet, which is not the case.

Some might mistakenly assume the answer is $12 because it is an extra $6 on top of the BTN’s open. It’s important to remember that the BTN is not raising by $6, but technically only increasing by $4. This is because the BB (big blind) post of $2 was the previous bet.

The BTN is hence raising the BB post by $4, meaning the BB’s minimum raise size is actually $10 (an additional $4 on top of the $6 open-raise).

In this case, BTN has raised the BB by $6, meaning the BB’s minimum legal re-raise size is also $6 for a total raise size of $18.

The maximum legal re-raise size is straightforward in both fixed-limit and no-limit games.

Fixed Limit à  Players may not re-raise more than either the small-bet or big-bet amount (depending on which street they are currently on).

No Limit à There is no limit to how much players may re-raise, although they may not raise more than the number of chips they have at the table. Once a player has invested all his chips, he is entitled to see a showdown. Additional re-raises involving cars and private yachts are mostly a thing of fiction and against the rules.

Calculating maximum raise sizes in games with a pot-limit structure is more complicated, as we’ll discuss below.

Calculating a pot size raise is something that players notoriously get wrong. Why not test your knowledge by trying to answer the following question?

Take a moment to write down your answer before proceeding.

The trick to calculating a pot-sized re-raise is as follows.

Imagine we first call and see what the total pot size would be.

In this case, if we smooth call, there would be $36 in the middle (including the $12 already in the pot). The maximum allowed raise is hence an additional $36 for a total re-raise size of $48.

Since it’s easy to get the numbers wrong, it might help to confirm our answer is correct by using a simple technique. If our raise size is calculated correctly, BB should be getting exactly 33% pot odds on the call. Let’s confirm. 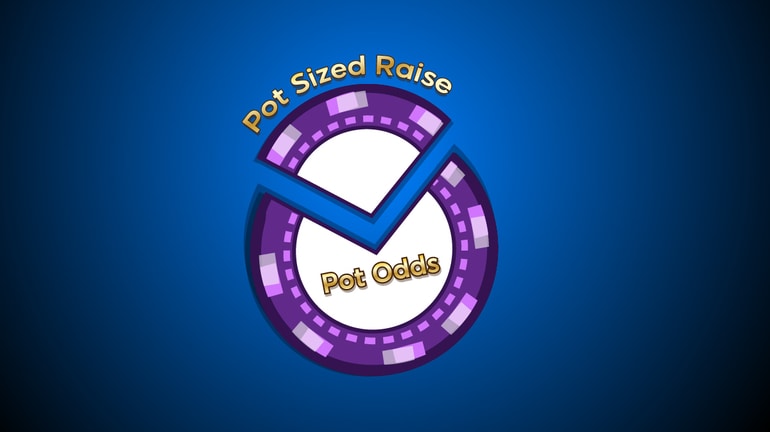 When Re-raising is Illegal

It is not always legal to re-raise in poker, even if we have additional chips remaining in our stack. There are two critical scenarios where this may occur.

- The betting cap is reached when playing a game with a fixed-limit betting structure.
- An opponent is all-in for less than the minimum legal raise sizing.

There is a limit on the number of re-raises that may occur with a fixed-limit betting structure. (Otherwise, players could continue re-raising each other until all the stacks are in.)

This limit may potentially vary, but, in the vast majority of cases, it is one bet and three raises.

For instance, the following example is taken from fourth street in fixed-limit stud. (Stud is most commonly played with fixe- limit betting structure).

Player A may now only call or fold, re-raising is no longer legal.

This limit on the number of re-raises is referred to as the cap.

The Action is Not Reopened

However, if a player has already matched the previous bet in that betting round, he is only permitted to call or fold when facing the all-in shove.

Example – In the following hand scenario, which players are allowed to re-raise against the all-in shove?

The first thing to note here is that the legal minimum raise size after player B bets is to $24 (an additional $12). Player C does not have that amount in his stack, however, and is permitted to shove all-in with what he has remaining.

Player A is permitted to re-raise if he wishes.

Assuming player A calls, player B is not permitted to re-raise. Player B is the one that made the previous bet of $12.

Since there has been no legal raise sizing made since he made his $12 bet, he is not permitted to re-raise.

- Fixed limit re-raises occur in increments of the small or big bet.

- Pot limit re-raises must be the size of the pot at most.

Specific terms are used interchangeably, which may give rise to confusion. 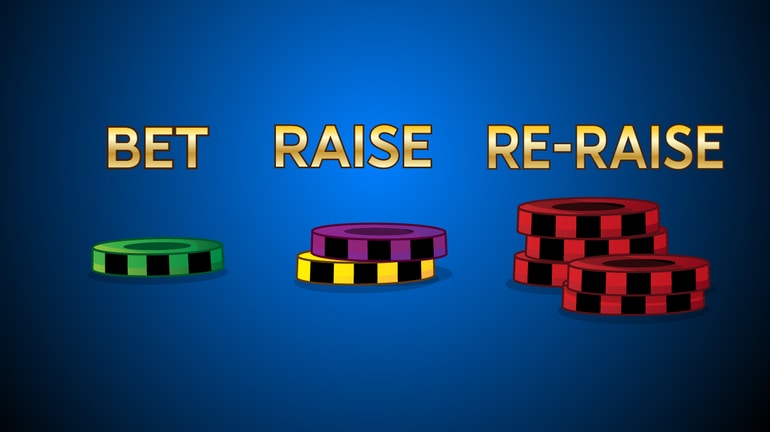 Since sometimes the first bet on a given betting round is (perhaps incorrectly) described as a raise (rather than a bet), the term re-raise may also be commonly used to describe the first increase in a wager over the initial bet.

Re-raises are also commonly referred to as raises rather than re-raises, it’s simply easier to say “raise” than “re-raise”.

Some of the confusion may arise from the fact that the first action in many variants should technically be referred to as a raise (since the big blind post constitutes the first bet).

When we reach the second betting round, the first bet should be described as a bet (not a raise), but it’s common to hear players use the term “raise” regardless.

Numbers are also used to describe raises/re-raises, based on where they appear in a sequence of bets.

Remember that, in games such as Hold’em and Omaha, an open raise preflop is described as a “2bet” because the mandatory blind payments are the first bet.

What is a Limp Re-raise?

The term “limp re-raise” refers to the action of limping preflop and then re-raising when facing a raise (known as an isolation raise). It is generally considered to be a tricky line used by recreational players – often representative of a strong hand such as AA and KK in No Limit Hold’em.

What is a Back Re-raise?

The term “backraise” or “back re-raise” refers to the action of re-raising after initially just calling preflop. For example, a player might call an open raise preflop and then 4bet when facing a preflop squeeze. This is considered a tricky line since if the back-raiser has a legitimate hand, why did he not 3bet initially?

Strategy: When is Re-raising Recommend?

The main impact of re-raising is that it creates a larger pot on average. This is mostly good in scenarios where we either have a strong made hand or are drawing to a strong made hand. (Since these types of holdings like to play big pots.) Re-raising may also be a good option if we believe our opponent will be folding too often when facing a re-raise.

1. We have a dominant strong made hand or strong draw and want to get more chips into the pot.

2. We believe that our opponent will be folding sufficiently often against a raise for it to be profitable. (Especially useful in scenarios where we have a strong draw, known as “semi-bluffing”.)

Strategy: Which Raise Sizing Should I Select?

Re-raise sizing is critical and will depend on what we are trying to achieve.

Strong value hands will typically try to raise as large as possible while still getting called at a high frequency. However, if someone were to call significantly more often against a small raise sizing, the smaller sizing could prove optimal.

Weaker value hands will typically raise for smaller sizings to avoid isolating themselves against stronger holdings.

Bluffs typically try to raise as small as possible while still retaining a decent frequency of folds. However, if someone were to fold significantly more often against a large raise sizing, the larger sizing might prove optimal.

Although raise sizings should be varied depending on what we are trying to achieve, there are typical “standard” raise sizings that are most commonly used in every scenario.

For example, the following table lists standard raise sizings for No Limit Hold’em (and is similar for other pot-limit and no-limit variants of poker).