888poker presents a hand from the ARIA 2016 SHRB with hand analysis from 888’s Dominik Nitsche as Dan Smith faces off against Rainer Kempe. 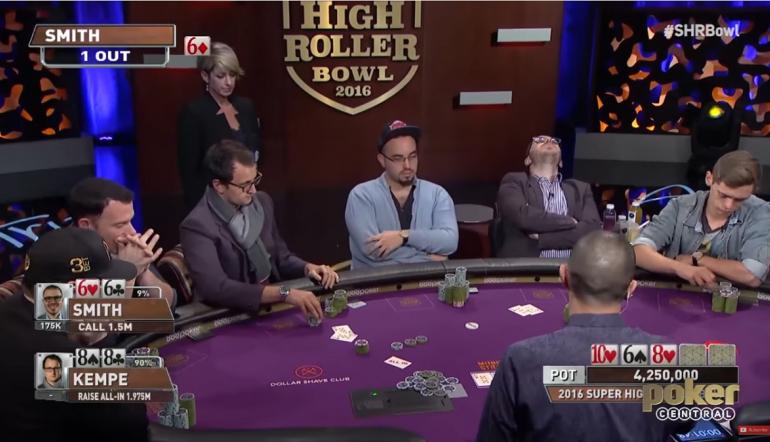 In this hand, which occurred in the sixth episode of the 2016 SHRB, Dan Smith and Rainer Kempe squared off in one of the tournament’s most memorable hands, which also happened to be a major cooler. We asked 888poker Ambassador Dominik Nitsche to break down the hand and see if there was anyway Smith could have gotten away without going bust.

At the final table of eight, the money bubble was in full effect. That meant just one more player needed to leave empty handed – or rather down the $300,000 buy-in – to ensure the remaining seven a minimum $600,000 payday.

“I think the play here is entirely dictated by the fact that they were on the money bubble,” said Nitsche. “If you are on a bubble of a tournament, your play should not just be influenced by your cards and your opponent’s range, but also by the other stack sizes at the table. Here, there were a couple of other short stacks around the table. This should have forced both Dan and Rainer to play somewhat cautious before and after the flop.”

“Now when both players flop sets, my above advice is all good and true, but a set in No-Limit Hold’em is a monster. Period,” said Nitsche. “This is typically a hand you would never fold, but could this spot be an exception? Maybe.”

“Flat-calling the flop is almost certainly an option, and I think I prefer it,” said Nitsche. “But I can totally understand why Smith decided to raise there. Dan is an amazing player, so he understands that getting it all in here with a set isn’t quite the dream situation many amateur players feel it is. Dan is also up against Rainer, a world-class player who won't be firing it in with just an overpair. He is simply too good for that. At worst, he has a hand like J♥9♥ or Q♥J♥, and even those he might just elect to call with.”

“It's a tough spot for sure, but I think Dan just calling is the play,” Nitsche continued. “It's important to keep in mind that Dan called from the small blind, so his range is a lot stronger than if he had called from the big blind.”

How could calling from the small blind as compared to the big make such a big difference? Nitsche is suggesting, correctly, that by calling from the small blind Smith needs to commit 25% more than he would have from the big blind. As such, the quality of his starting hand has to reflect that, meaning his range is likely small to middle pocket pairs, hands with aces in them, or even two paint cards. On the flip side, players are prone to defend from the big blind with a much wider range as they already have a good number of chips in the pot.

“If this hand was cutoff versus big blind, I’d say there is absolutely nothing that can be done,” Nitsche added. “But now given how tight Dan’s range should be preflop, I have a hard time believing Rainer is gonna put the chips in with a worse hand.” 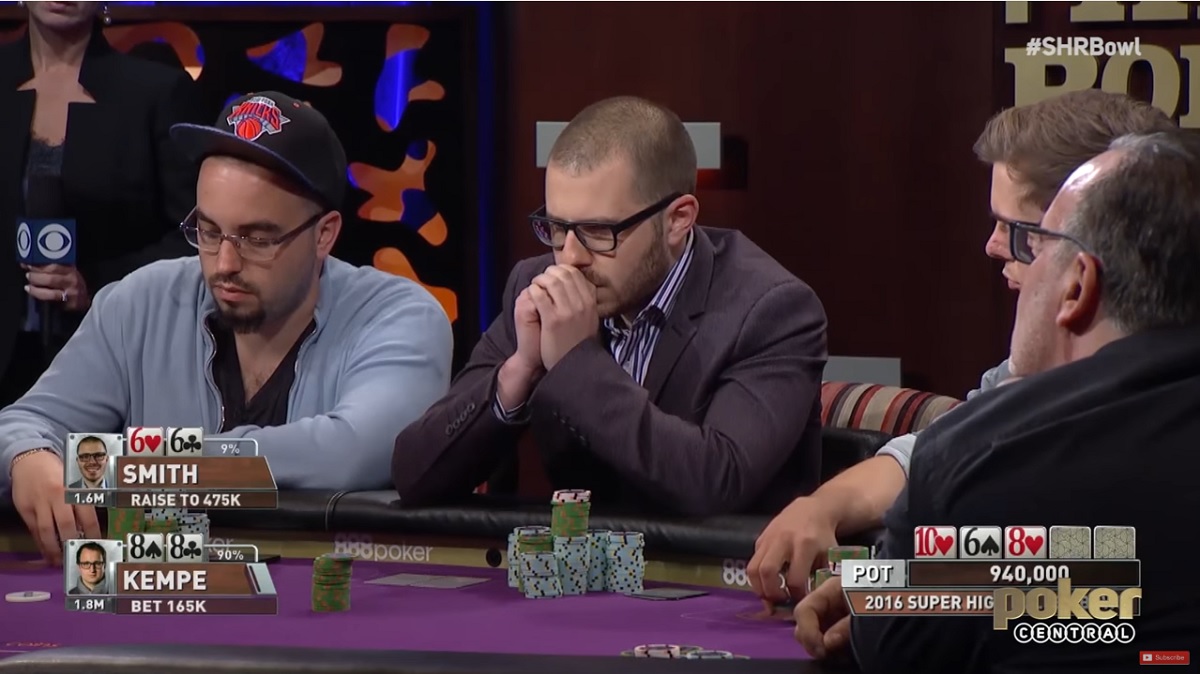 Smith was looking for the case six to win the pot, but it didn’t come as the A♣ blanked on the turn followed by the Q♥ on the river.

According to Nitsche, here are the major lessons to take away from this hand:

Smith was crippled after the hand and busted a short time later as the bubble boy. Meanwhile, that hand propelled Kempe into the chip lead, and he used it to navigate his way to the end to capture the $5 million first-place prize.