How to Defend Your Big Blind in Poker

We've all got to pay it if we play poker – the big blind. Find out how you can improve your big-blind play and make it profitable. 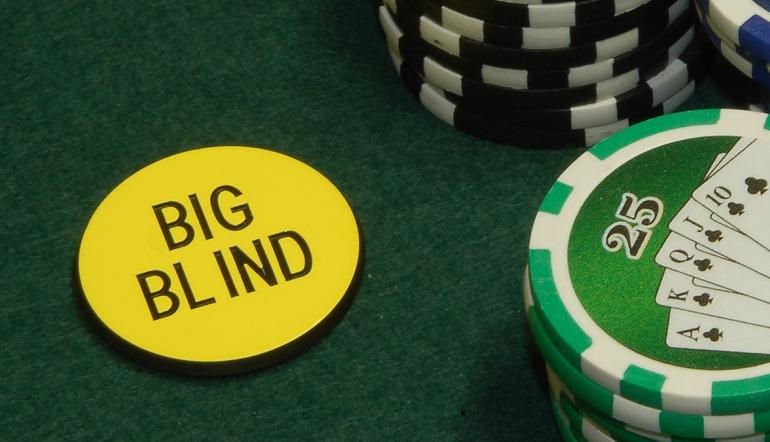 It’s only in more recent times that players have fully begun to understand the importance of defending their big-blind aggressively.

It was commonly considered correct play to simply fold a huge percentage of hands from the big-blind since we would be out of position postflop. If we could travel back in time a number of years and ask what the average defending range
from the Big Blind against a Button open would look like, we’d usually get shown something like this: 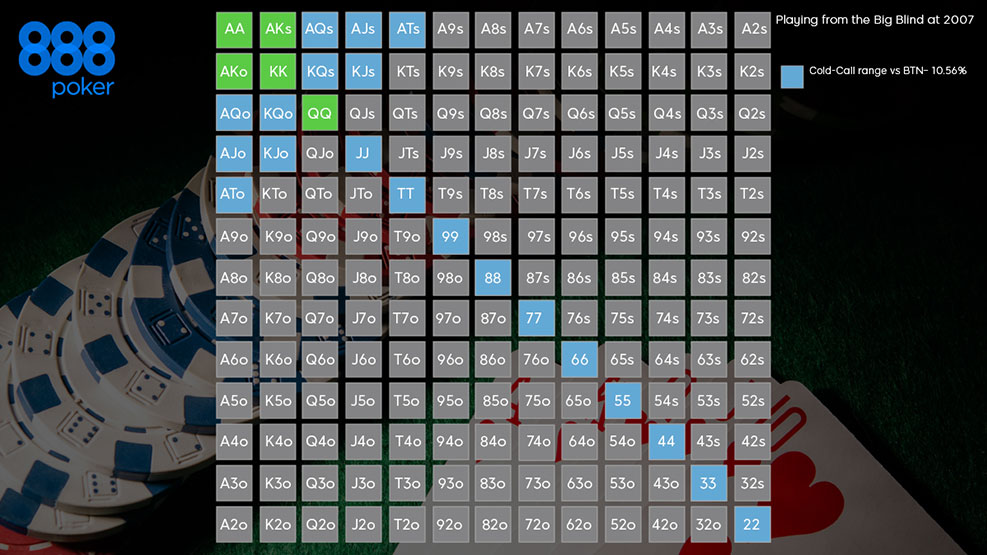 Thinking back, the tightness of the average player’s blind defence range is somewhat laughable. Most of us would never dream of defending so tight just because we are out of position. Naturally, we don’t want to minimise the importance of position. It’s a huge disadvantage being out of position, but this doesn’t automatically mean that we want to simply start folding everything.

In fact, it’s correct to defend with a reasonably wide range of holdings in the Big Blind despite our positional disadvantage. This is because:

Let’s take a quick look at a more modern approach to blind defence in the same situation, Big Blind vs BTN cold-call. 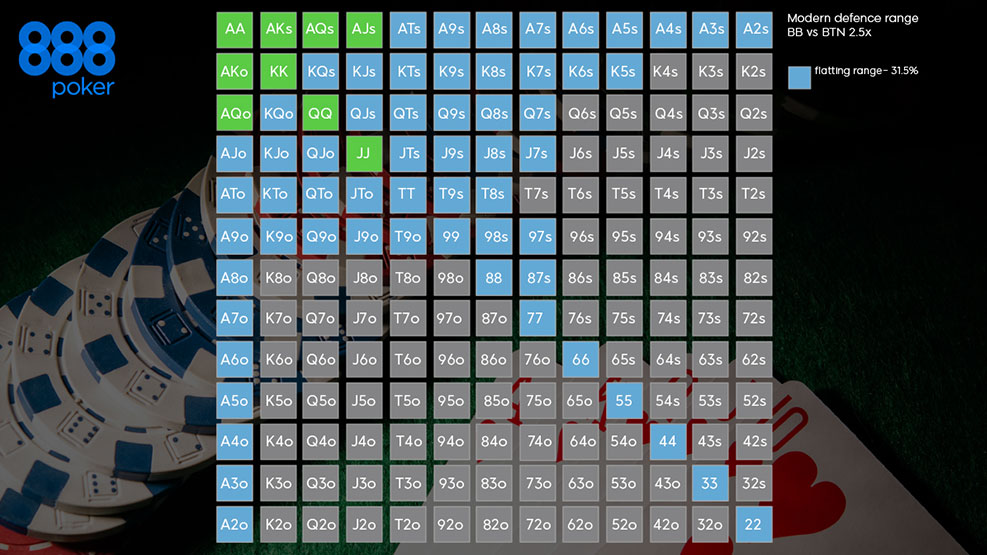 The difference is very dramatic. This chart represents a 31.5% flatting range, which is roughly 3 times as wide as was initially thought correct to defend.

However, it’s also important to remember that the farther we go back in time, the more players had a tendency to make super large open-raises by today’s standards. At some point in time, it was considered standard to literally make a 4bb open from every position, including the button. These days, if we see someone making a 4bb open-raise from the button, we automatically assume that they are a weaker player. It has become so standard to see 3bb, 2.5bb, 2.2bb or even min-opens.

Therefore, raise amounts should also be factored in when we account for the differences in modern defending ranges. The cold-calling range above is designed against a 2.5bb open. The difference in open-raise sizing has a fairly dramatic effect on what is considered a correct defending frequency.

Let’s imagine we now face a 2bb open-raise from BTN, our cold-calling range should start to look something more like this: 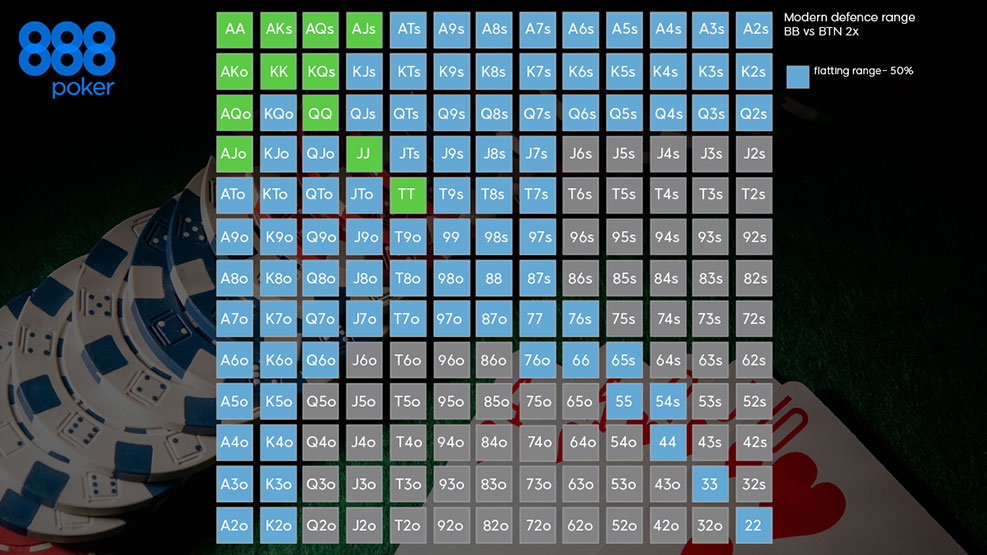 Our defending is roughly around the 50% range. A small change of just 0.5bb to the size of the opener has affected the range we must defend by almost 20%! For this reason attempting to come up with a complete strategy for preflop defence is so complicated. We need to make huge adjustments to our poker strategy based on the size of the open-raise.

The increased frequency with which we are now cold-calling may give us a few postflop headaches. And especially so, if we are not used to playing with a range much wider than previously.

Simply being aware of the possible lines that are available postflop, and when we can use them, gives us a huge advantage. Let’s examine of a few

One of the ways we compensate for having a wider cold-calling range is to make sure we are a little tougher with our range postflop. Assuming we just adopted a fit-or-fold strategy postflop, it would no longer be correct for us to defend a wider range preflop. We’d just be laying a whole bunch of extra chips on the line for our opponent to collect.

One of the ways we can defend our wider preflop range is by aggressively check-raising flops where we have potential. It’s considered correct to check-raise bluff twice as many flops as we check-raise for value. In other words, most of the time when we check-raise the flop, we should be bluffing.

The best types of hands to use are those which have the potential to make a strong 5-card hand by the river. Straight-draws, flush-draws, and good back-door draws are all good candidates. We’ll talk more about check-raising later on this in the article.

This play is another option for defending on the flop when facing a cbet. In terms of made hands, we should employ a strategy similar to the following:

Assuming we float with some type of draw, it is very important to understand the reasons for doing this. Imagine the following scenario:

We have the lower end of a gutshot. Therefore, we should nearly always call here. But why? Are we even getting the right pot-odds?

Well, actually, not really. We are investing 4bb into a total pot of 13.5bb which means we need to hit on the turn.

So, how often do we actually hit? We have 4 outs (ignoring for a minute that some are tainted), which means we will hit our gutter around 8% (4% * 2) of the time on the turn.

Hmm...We don’t get the direct pot-odds, so we have to rely on our implied odds here. How are our implieds looking? Actually, not really that great either. Firstly, we are only going to hit about 16% of the time by the river, and even if we hit we are not going to have the nuts.

We have the lower end of the straight, and also some of our outs are tainted because they are clubs. Even if we hit one of our cleaner outs on the turn, there is still the possibility that a third club can fall on the river, damaging our implied-odds.

Okay, so our pot odds are bad, our implieds are bad. Why are we even calling?

To help us answer this question, let’s start by defining what a “float” is in poker.

Calling a marginal hand, with the intention of taking the pot away on a later street.

Not many people realise this, but the main reason why we absolutely have to call is because this hand makes a decent bluff on later streets. The fact that it can sometimes turn or river a semi-strong hand is simply an added bonus. Let’s see how the hand plays out.

Now that we have a way to win the hand without needing to improve, the flop call starts to become +EV. If we ever float a marginal hand and then don’t take the relevant bluffing opportunity when it presents itself, it’s actually better that we don’t float the hand in the first place.

We are not saying that we need to always turn our hand into a bluff on a later street, but here our opponent showed weakness with his turn check, presenting us with a clear opportunity to take the pot away from him. This type of line is referred to as a river probe. It’s also possible for us to use a similar line on the turn.

The truth is that we make the majority of our money, not when our opponent fires a continuation bet, but when he checks back. Assuming we cold-call in the blinds OOP and our opponent does not fire a cbet, we should immediately look for good spots to take the pot away from him.

Let’s look at a similar hand, but with a key difference. Our opponent decides that he doesn’t even want to cbet the flop.

Here we can see what is known as a turn probe. Our opponent signals weakness by checking back the flop, and we take advantage of this by leading the turn as a semi-bluff. Note that, although we picked up a gutshot in this example, versus many opponents at the lower limits it is not even necessary for us to turn equity in order to use this line. It’s profitable versus the majority of opponents to bet any two cards here.

But what if our opponent calls our turn probe?

At the lower limit games, we can often make automatic profit by simply firing two streets as a bluff, any time our opponent checks back the flop. This doesn’t necessarily mean we should always fire. However, we should think about our opponents range and our specific holding.

In this case, there are a number of draws that our opponent can turn which are now easy folds for them on the river. Some of these busted draws even beat our hand, such as QJ high for example which turned an OESD.

It usually makes sense to turn our hand into a bluff here.

There are naturally other lines that we can use when defending our big-blind postflop, but we have covered the main ones.

Check/call flop followed by check/raise turn can be a line that’s worth experimenting with, both as a bluff and for value.

Also, the slightly unorthodox check/call flop, donk-bet turn can be highly effective in the right situation.

As an extension of this, it’s also possible to take a check/call flop, check/call turn, donk river line as a bluff and for value.

These will usually be slightly more advanced lines, however. It’s recommended we first become proficient with our preflop defending ranges and the other 3 postflop lines which were mentioned first:

Chad Holloway is a 2013 WSOP Bracelet winner who has previously worked for PokerNews as a managing editor and live reporter
Related Content
Taking the Mystery Out of the Nash Equilibrium in Poker!

6 Poker Cheat Sheets to Shortcut Your Way to the Top!

Poker Cheat Sheet – Shortcuts and Inside Tips for Beginners

How to Manage Your Online Poker Bankroll By Chris Moorman