Find out how poker hand combinations can affect your game and how to use the mathematics behind them to get a step up on the competition.

Ever had that sinking feeling, facing a big bet on the river while holding a bluff-catcher?

We realise that there is some sort of process we should be following. But we find our mind going completely blank. We may have heard two poker players discussing “combinations”.

Could it be that we are missing part of the puzzle here?

In this article we’ll consider the following -

There are two slightly different topics with the same name.

The definitions are as follows:

1. A singular instance of a certain poker hand (usually referring to the hole cards).
2. Mathematics. A selection of items from a collection where order doesn’t matter.

We’ll talk more about that mathematical definition a little later.

For now, let’s focus on the first definition. This one is the most commonly used in the context of a discussion on poker.

The term “combination” (or “combo” for short) refers to the different ways we can make a specific type of poker hand.

Example: We are dealt AK preflop in Hold’em. How many different combinations of AK are there?

If we were so inclined, we could list every possible way of making AK. But most players remember that there are 16 combinations of every unpaired hand –

Example: We are dealt 66 preflop in Hold’em. How many different combinations of 66 are there?

It’s easy enough to remember preflop combos. But things get a little more complicated when we need to take in to account card removal effect. (Various board cards are known, reducing the available combinations of different types of starting hand).

It’s helpful if we have a system for calculating combos.

Returning to our AK preflop we can now see how our value of 16 was calculated.
In a standard deck, there are 4 available Aces and 4 available Kings.

Let’s see a slightly tougher question where we need to take into account card removal effects.

Example: In Hold’em, the flop texture is Ac8d7h. How many combinations of AK are there?

The key to this question is understanding that there are now only 3 Aces left in the deck. One of the Aces is clearly on the flop.

As such, we have 3 available Aces and 4 available Kings.

Returning to our preflop question with the pocket 6s, four Sixes are available in the deck.

Let’s again see a slightly tougher question where we need to account for card removal effects.

Example: In Hold’em, the flop texture is Ac6d7h. How many combinations of 66 are there?

Since one of the Sixes is already out there, only 3 Sixes remain in the deck. 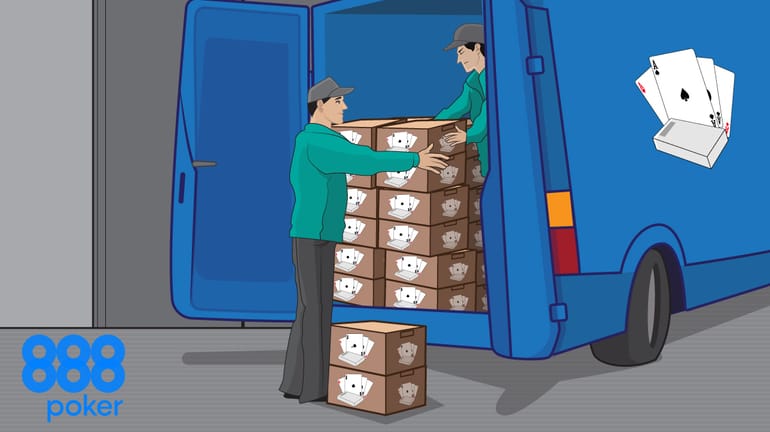 We should now be equipped to answer slightly more advanced questions regarding combinations. We’ll need basic arithmetic skills and some common sense.

Example: We hold pocket Aces preflop. How many combinations of QQ+/AK does our opponent have?

Let's ignore the card removal effect temporarily. We know our opponent would have the following:

However, our opponent holds two of the Aces meaning that the number of combos will be affected due to card removal effects.

This scenario is sometimes referred to as the “blocker effect”. The QQ and KK combos will remain at 6 combos each, but the AA and AK combos will be affected.

One combo of Aces is left in the deck since we hold two of the Aces already.

So, if we list all the combos, we get the following:

That’s a significant difference in available combos due to card removal or “blocker” effects.

Example: In Hold’em, the flop texture is Ac8d7h.

How many different ways of making a set are there?

Example: In Hold’em, the flop texture is Ac8d7h. How many different ways of making top pair are there?

This situation is where logic and common sense come in. We know that there are 12 combos of any individual top pair type hand such as AJ (4 * 3 = 12).

But how many different Ax hands are there that make top pair?

There are 13 card ranks in a deck. So if we exclude AA, A8 and A9, 10 different types of Ax hand remain that make top pair, each with 12 combinations.

These tools can show us precise numbers of combinations in complex scenarios.

Now let’s visit our second definition of the term combinations.

Mathematics: A selection of items from a collection where order doesn’t matter.

So far, we have seen ways of calculating hole card combinations. This second definition will help us calculate the probability of various board runouts.

Let’s rewrite our definition to make it poker related -

Poker: A selection of cards from the deck where order doesn’t matter.

Let’s start with an example question.

It’s often said that there are 19,600 different possible flops in Hold’em.

Let’s start by looking at the mathematical formula for combinations. 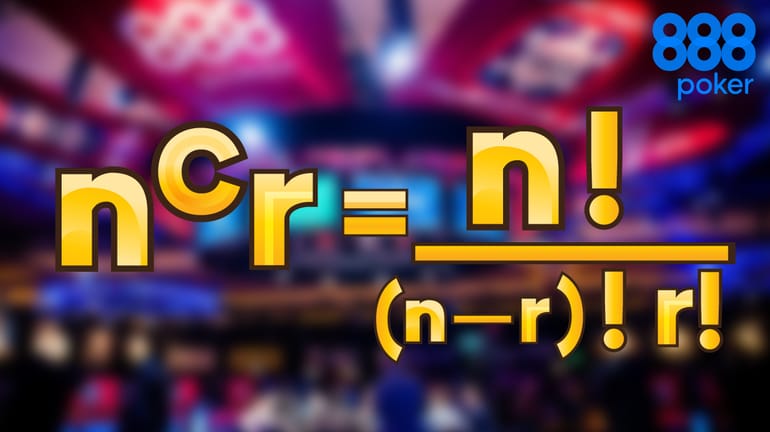 Let’s define the values in the formula -

Now plug our numbers into the formula –

It’s possible to plug these numbers directly into a calculator (using appropriate brackets). But it’s also viable to simplify the formula manually.

Although the simplification method is slightly outside the scope of this article, it’s not overly complicated. We can simplify the above formula to the following –

Could it be that those calculations adjusting for the two often known (i.e. our hole-cards)?

n = 50 because 50 cards are remaining in the deck after our hole cards are dealt.
r = 3 because we are drawing 3 cards to generate a flop.

This time we get –

So, when players say there are 19,600 flops, they mean assuming 2 cards from the deck are known. We’ve learned that there are 22,100 different flops that an outside observer would experience. (That’s as long as he doesn’t know any of the hole cards).

Let’s use our knowledge of combinations to see if we can answer a slightly more advanced question.

Example: We are dealt ThJh in Hold’em. What are our chances of flopping a flush? 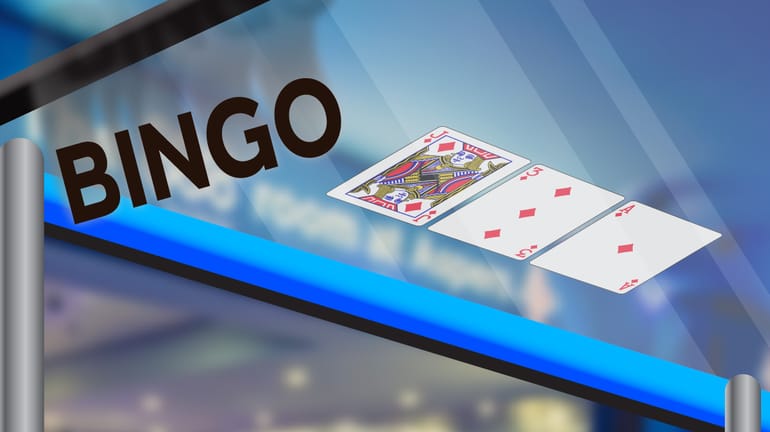 We already know how many different flops there are (19,600). So our next goal is to establish how many ways of making a heart flush exist. This calculation assumes there are 11 hearts left in the deck.

How can we establish the number of different 3-card combinations from a selection of 11 cards?

Once again, this calculation is precisely what mathematical combinations are designed to do.

n = 11 because this is how many hearts there are left in the deck assuming we already hold 2hearts in our hand.
r = 3 because this is the number of cards used to generate a flop in Hold’em.

Let’s input the numbers into our formula –

The probability of flopping 3 hearts is, thus–

When we check with equity calculation software, it tells us that the chance of flopping a flush is 0.82% rather than 0.84%.

Can you see what the discrepancy is?

Some of those three heart flops give us a straight flush. We need to know how many so that we can discount it from our total number of flush flops.

Flops that make the straight flush with ThJh–

That’s four different flops that we need to discount from our current total of 165.

There we go. We have arrived at 0.82%, the same value given to us by equity calculation software.

Example: We are dealt AKo, what are our chances of flopping a straight?

Perhaps we are starting to see a pattern for the simplified version of the formula.

The pattern is as follows –

In the case of attempting to make a straight, we need to hit a TJQ flop (although the order of the cards doesn’t matter).

There are 4 ways we can catch the straight completing river card.

If we multiply the top half of the formula (12 * 8 * 4), we get 384. This solution is the number of different ways of flopping the straight assuming the order of the cards is relevant (which is not).

So, 384 would suggest that TcJhQd and JhTcQd are different flops,which they are not for the purposes of this calculation.

The mathematical name for a selection where the order matters is permutation rather than combination. It involves a slightly different formula. 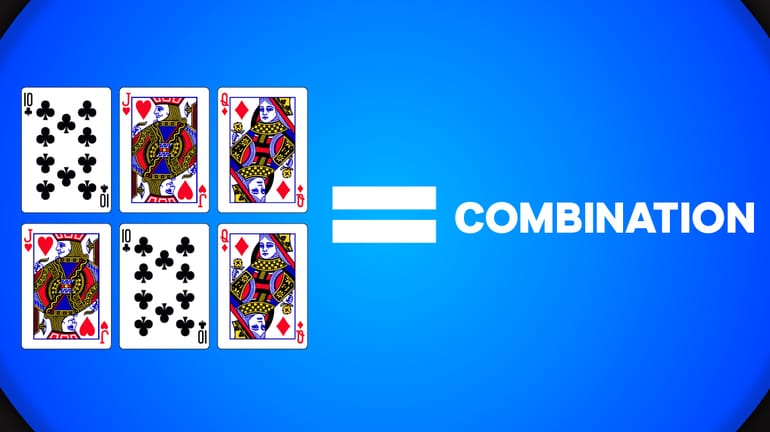 The second part of the formula (divide by 3! Or 6) is used to account for duplicate flops (where just the ordering is different).

That leaves us with 64 different ways of making a straight where the order of flop cards doesn’t matter.

Using combinations to answer this question is not strictly necessary. We can confirm the answer by using the basic probability formula.

Let’s see how it works –

Now, we multiply the probability of each successive event to establish the total probability.

That’s the same value we calculated earlier for flopping a straight given that we are dealt AK preflop.

Do We Have the Winning Combination?

It’s almost impossible to know for certain whether we hold the winning combination.  Even if we have a strong idea about the number of hand combinations our opponent has,

We’d only know for sure if we held the stone-cold nuts (and even then, we could sometimes chop).

So, if we don’t know for certain whether we hold the winning combination, how can poker combinations help with difficult bluff-catching?

Here is a quick example of the type of analysis that can be run with combinatorics.

We hold a bluff-catcher on the river when facing a pot-sized bet. We estimate that our opponent has around 40 combinations left in his range; Fifteen of these combos are bluffs, the other 25 being value combos.

Should we call or fold?

Well, according to our pot odds we need to win at least 33% of the time justify a call when facing a pot-sized bet.

Can we expect to win that often? We aren’t left in the dark in this case.

Based on our estimates on the number of Villain’s winning combinations, we expect to have the best hand 15/40 or 37.5% of the time.

We hence expect to lose the majority of the time when calling. But, mathematically, this call is a winning one in the long run.

The stronger our awareness of Villains combinations, the more accurate and profitable our decisions will be.

In contrast, far fewer players know about mathematical combinations. The average player may not even have heard of them, let alone know how to calculate them.

We’ve learned that there are 19,600 different flops, given two known hole cards. We can use combinations to establish how often certain types of flop hit. Then divide the result by 19,600 to learn the respective probability.

Having a firm grasp of such mathematical concepts can give us a significant edge over the playing field.

Timothy "Ch0r0r0" Allin is a professional player, coach, and author. Since the beginning in 2006 he has built his roll from the lowest limits online without depositing a single dollar. After competing in some of world's toughest lineups (and winning) he now shares his insights and strategies with the 888poker magazine.
Related Content
Learn to How to Play Loose-Aggressive Poker