What is Blocker in Poker?

In poker, the term blocker refers to a card in our hand that makes certain hands for our opponent less likely. For example, if we hold AK preflop in Hold’em, it makes it less likely that our opponent holds AA. Ordinarily there are 6 different ways to make AA, but since we hold one of the Aces (i.e. we have a blocker), there are now only three ways for our opponent to make AA. We can express this by saying that we “block” our opponent’s AA combos. The technical term for blocking is card removal effect. 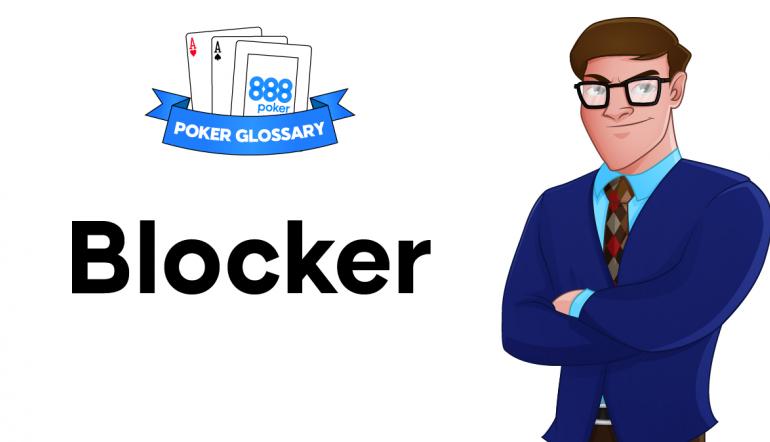 Although we can’t see our opponents hole-cards, our own hole-cards give us a small amount of information about what our opponent holds. How so? If we hold the King of clubs it means that our opponent is less likely to hold a King in his hand. We might express this by saying that “we block villain’s Kx combos”.

Blockers, aka card removal effects, can help us to increase the quality of our decisions in close spots. Here our some examples.

1. It’s common to 3bet or 4bet bluff preflop with an A, K, or Q in our hand since it “blocks” our opponents premium value range that he might be re-raising with.

2. When bluffcatching rivers we like to block our opponent’s value range while at the same time not block his bluffing range.

3. When bluffing rivers we like to block our opponent’s calling range while at the same time not blocking his folding range.

Let’s briefly analyse the effect of blockers on a 4bet bluff situation preflop. Imagine our opponent will typically 5bet jam the following hands against a 4bet -

That’s a total of 34 combinations that will be re-raising against our preflop 4bet bluff. Now imagine that we 4bet bluff with an Ax type holding. This means our opponent will have less combinations of any of the value holdings that contain an Ace.

He now only has 27 value-shove combos as opposed to his original 34. 20% of his value range is hence missing due to the blocker effect of us holding an Ace. QK is another excellent choice because it blocks two cards that frequently appear in our opponent’s value range. Assuming we hold KQ, villain’s value-shoving range would now be as follows.

Blocker effects in four-card variants such as Omaha can be even more pronounced since we hold information regarding four-cards that our opponent definitely doesn’t have in his range. Card removal effects are typically most important in Stud variants due to the sheer amount of information available on the table in the form of upcards.

Example of Blocker used in a sentence -> Although the possible heart flush completes, we hold the Ace of hearts blocker making it less likely that our opponent has the flush.

How to Use Blocker as Part of Your Poker Strategy

Using blocker effects to make decisions on the later streets in Hold’em usually implies that the decision is very close and needs some sort of tie-breaker. One mistake novice players make is attempting to utilize blockers to make decisions in scenarios which are already a clear decision one way or another. Most soft games don’t require analysis of card-removal in order to generate a high winrate.

Let’s imagine the following board texture in a No Limit Hold’em example.

We have a mid-strength made hand and are determining whether a bluffcatch is warranted. Even if our opponent’s betting range is polarized, not all bluffcatchers are equal since some benefit from useful card-removal effects. As a recap from above -

1. We want to block our opponent’s value-range.

2. We want to avoid blocking our opponent’s bluffing range.

It’s important to remember that the exact makeup of the above two ranges will be heavily dependent on the line that villain takes during a hand. I.e it’s of no relevance that we block straights, if villain always takes a different line with straights at an earlier point of the hand. Many players forget this resulting in irrelevant use of blockers.

Let’s assume that on the above board texture our opponent mainly likes to bluff busted flush-draws, and his main value-hands will the J9 straight or sets. In that case -

1. Any Qx, Tx, or 8x with a side card of 8 or 9 will be useful because it blocks both straights and sets.

2. We prefer not to hold a heart in our hand. Any heart will hold means less potential bluff combinations our opponent can show up with.

Now this might give the appearance of being extremely simple, but the truth is usually the opposite. For example, imagine our opponent will also bluff AJ, KJ and a selection of other Jx combos. Is it still favourable to hold the TJ? True, we block the straight, but we also now block a decent portion of villain’s bluffing range which is bad for us. Are we overall incentivized to bluffcatch with a Jack or should we now avoid bluffcatching with Jx holdings? This is going to depend on the exact number of straight combos and Jx bluffs in villain’s range. It’s easy in practie to assume that holding a Jack is good for us but later find out that it actually isn’t. For this reason, utilization of blockers is significantly more nuanced than the average player might imagine. Blocker calculation often ends up being more the territory of poker solver than human calculation mid-hand.

Another important detail to keep in mind, is that perhaps our opponent in the above example simply doesn’t bluff the river very much. We might have the best possible blockers for bluffcatching, but the best decision will still be to make a trivial fold. For the most part, blockers will only be of importance if our opponent is playing somewhat close to a balanced (GTO) strategy in some or all situations.

The principles for bluffing rivers are mostly identical to the ones used for bluffcatching. We want to do the following -

As an example, it’s considered non-favourable to bluff rivers on certain runouts when we hold a busted flush-draw in our hand. The reason? We block the combinations of busted flush-draws our opponent might be folding after calling on the earlier streets.

One of the most commonly cited examples of blocker utilization when bluffing comes from Pot-Limit-Omaha. In many soft lineups it will be incorrect to get the stacks in with non-nut-flushes since they will nearly always find themselves up against a better flush. In PLO it’s possible to guarantee our opponent doesn’t have the nut-flush by holding the Ace suited to any flush available on the board. See the following Omaha example:

Note also that the Omaha four-card starting hand here is an example of a holding which blocks its own outs. It’s generally not favourable to hold more than 2 cards of a particular suit. This is because we can only use two of our hole-cards to construct a hand in Omaha. By holding three clubs we are actually reducing the chance that we make a flush postflop