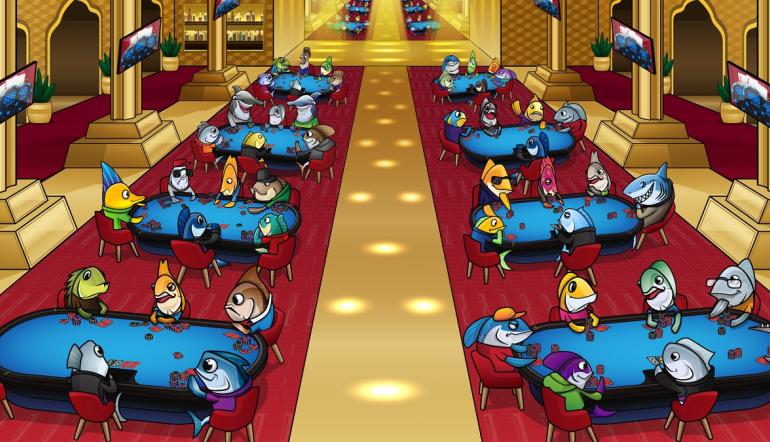 In the early stages of the tournament identify the weak players at your table, and try to get involved with them in a few pots. In terms of starting hand selection it’s best to avoid calling raises with easily dominated poker hands like A-J, K-Q and K-J as these can get you into a lot of trouble. Small pairs and suited connectors are golden hands early on though, because it’s much easier to know where you’re at in the hand. If you hit a set with a small pair, you know that 95% of the time you have the best hand. And once you know that, you can go about building the pot the best way you can.

Before the antes kick in there’s no need to go crazy playing too many hands. It’s probably best to fold hands like K-Q and A-J offsuit in early position. You can still play hands like 6s-7s for deception, but you really need to be careful about playing speculative hands. This factor is mainly dependent on your stack size though – with more chips you can get out of line a bit more.

Stack sizes are one of the most important aspects of MTTs. For example, a lot of people overvalue pocket pairs with a mid stack. Most online poker tournaments aren’t very deep-stacked, so unless both the initial raiser and you are deep-stacked, you probably can’t play pocket Sevens profitably to an early position raise. What people don’t realise with small pairs is that in order to get paid the implied odds, they need to hit their set, still have the best hand (e.g. not be up against a flush, straight or overset), and hope their opponent has a hand that they are willing to go to the felt with. That’s why small pairs are a lot better early on in a tournament when pots are more likely to be multi-way, because when you do hit your set someone else is likely to have a strong, but most likely second best, hand.

It’s a well-known fact that the top multi-table tournament players attack both the ‘final table bubble’ and the ‘in the money’ bubble. Bubble play online isn’t nearly as profitable as it once was due to the super-aggressive nature of current online poker play. Despite this, there are strategies to enable you to take advantage of the bubble (especially in smaller tourneys). A great way to attack the bubble that isn’t often touched upon is to re-raise other people that are also raising a wide range of hands, or to flat-call in position and mess with them post-flop (this works particularly well if you are deep-stacked).

When deciding how loose or tight to play at a certain table it is widely known that you should try to play the opposite of your table – i.e. tight on a loose table and loose on a tight table. However, other important factors, such as how much early position raises are being respected, should be considered. If you find your early position raises are being respected by the table, you can raise knowing that mostly you will either take the blinds uncontested, or only have to face someone flat-calling you with the possibility of taking it down on the flop. In these situations it is possible to loosen up a lot in early position. This strategy will only work well if you play well postflop, as you will obviously have to play a lot of flops if frequently flat-called. It is also only recommended when there are no short stacks at the table, as you’ll be priced in to calling their shoves with almost any two cards.

6. Quick on the draw

Postflop play is still important in MTTs, even though it’s usually not as important as in deeper-stacked cash games. Try and evaluate flops and put your opponent on a range. From this you can start to think about how likely they are to have hit the flop, etc. This clearly helps aid you in deciding whether to continuation bet or not. Also, take note of whether a player plays his draws fast or slow. This will enable you to represent when the draw gets there if they just called your flop bet, because you already know they play their draws fast or vice versa. If you know they play their draws slow you can price them out by firing at the board again when it’s a brick.

The most important people at your table are those to your immediate right and left. That’s because every orbit you’re probably going to have blind and late position battles. If you have a good read on these opponents, you can really start to pick up chips. For example, if you’re on the left of someone who likes to open a lot in late position, but doesn’t re-shove all-in unless they have a premium hand, then you can re-raise them without the goods in position and take down a healthy-sized pot a winning percentage of the time. Alternatively, if the players on your left have approximately 20 big blind stacks (the ideal re-stealing stacks), and are also aggressive players, then you can save yourself a lot of chips by not opening a wide range of hands in late position.

8. Pile on the pressure

A strong trait of most online players is their ability to get inside their opponents’ heads and force them into making big mistakes. In order to do this you need to put your opponents under constant pressure. One way to do this is by winning lots of smaller pots from them without the goods. A good example of this is raising their bets with air on dry flops, e.g. an A-8-2 rainbow flop. The real trick is to know when they’ve had enough, then pick up a hand and get it to hold... That can’t be taught!

On a final table, if there’s one player whose stack is a lot shorter than the rest, then you can really apply pressure on your opponents. This is because they will all be concerned with moving up a spot in the money and will therefore wait for the short stack to bust, rather than play back at you without the goods. Once the short stack has been knocked out, players will be more willing to gamble; as a result you should then switch gears and ‘slow down’ because your image will be loose at that point. The best MTT players can switch gears constantly with no difficulty at all.

Try not to look at the payouts of a tournament as this can start to cloud your judgement and affect your decision-making. Always play for the win and go with your gut instinct. Sometimes you’ll look silly, but if you’re never making huge errors then you’re not making enough poker moves, and other players will find you easy and predictable to play against. If your opponents know you are capable of anything it makes you a much trickier opponent. Most players are bad at adjusting to good aggressive play and will either get run over as they wait for their Aces, or spew to a better player with a 50 big blinds over-shove right into their opponent’s monster.