What is Offsuit in Poker?

Offsuit means that the suits of our cards don’t match. It is typically used to describe preflop holdings in Hold’em and Omaha. For example in Hold’em, when we get dealt 78o preflop (both of different suits) we refer to it as “Seven Eight offsuit” (as indicated by the ‘o’ next to 78). However, if we get dealt 78s (both of the same suit) we refer to it as “Seven Eight suited” (as indicated by the ‘s’ next to 78). 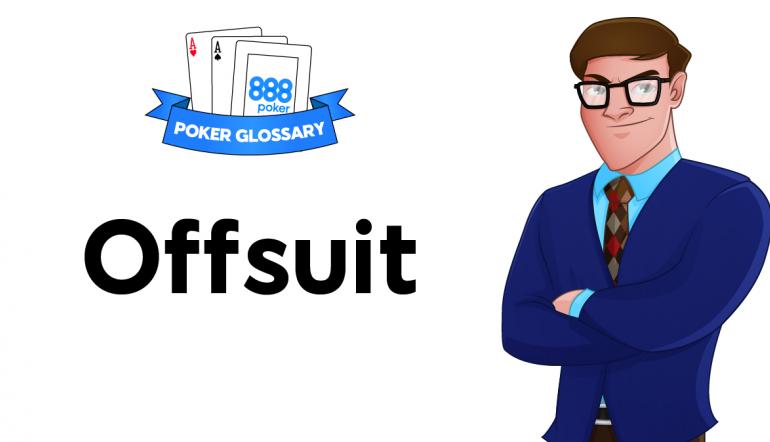 This concept can be translated to almost any other poker variant.

In Omaha hands can either be single-suited, double-suited or offsuit. A complete offsuit hand in Omaha (where all four cards are of a different suit) can also be described as “rainbow”.

Example of Offsuit used in a sentence -> In Hold’em, suited hold cards perform better than offsuit hole cards on average.

How to Use Offsuit as Part of Your Poker Strategy

Keep in mind that in Omaha, we prefer only two cards to a suit, not three or four. Being dealt four cards all of the same suit is problematic. Since we can only use two of our hole-cards in Omaha, we end up blocking our own flush outs with the other two. It’s hence better to be dealt a single-suited hand (two to a suit) along with two offsuit cards rather than holding 4 cards all of the same suit.