Five Factors to Consider Before Folding in Poker

Knowing when to hold a hand and when to fold it is crucial to every poker players’ success. Check out the top five things to consider when deciding to fold. 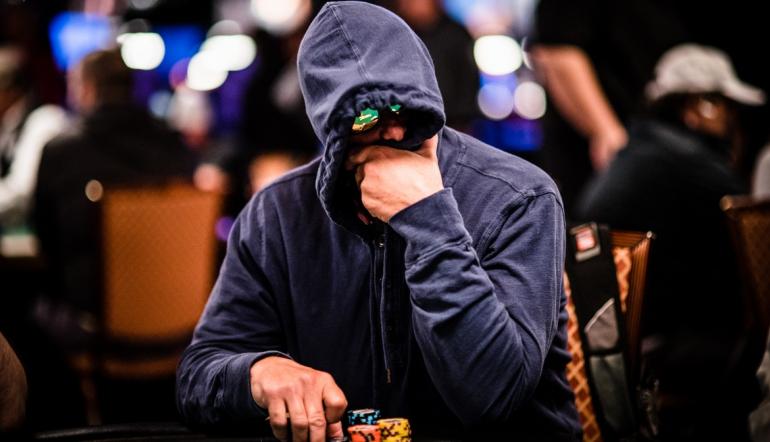 Those are the immortal words of Kenny Rogers in the memorable song The Gambler. Wise words for any poker player. But, let’s face it, it’s much more fun to hold a hand while contending for a big pot than folding and watching from the side-lines.

That said, folding is a big part of the game and an integral to poker success. If you play too many hands,you’ll be prone to crash and burn. Variance is real and only increases the more hands you play.

Another popular saying in poker is “tight is right.” Those players certainly know when to fold’em. To help you educate you on the best times to fold here are five things to consider before folding in poker.

#1.Are You Practicing Good Hand Selection?

Before you can determine whether or not to fold a hand, you need one to play. In No-Limit Texas Hold’em, each player receives two hole cards preflop and are immediately presented with a decision – play or fold.

There are 169 unique combinations of starting hands, and some are better than others. Pocket aces are at the top while deuce-seven is at the bottom. So which ones should you play? Experienced poker players limit themselves to playing the top 15 percent of hands while folding the other 85 percent.

Here’s what the top 15 percent of hands looks like designated by those hands highlighted in blue.

If you’re the type of player who doesn’t mind mixing it up a bit more, then you might consider playing the top 20 percent of hands. That means adding in all suited aces, king-nine and king-eight suited, and some other enticing hands.

Here’s a look at what the top 20 percent of hands looks like.

Of course, you’re free to play any and all hands, and often there’s a reason to do so (i.e. it folds to you on the button, and you raise with Qx10x). However, if you’re going to do battle at the poker table, you’ll want to be well-equipped.

#2.What Does the Money Mean to You?

Chips are how you keep score in both tournament poker and cash games, and those chips are worth cold hard cash. Money means different things to different people, so it begs the question – what does the money mean to you?

If you’re financially set, you probably play a more carefree and relaxed game. Whereas if you live paycheck to paycheck,tight spots can be much more stressful. First off, you should never play beyond your means. Hand selection is essential to success, but so is bankroll management.

Second, don’t kid yourself that a person’s lot in life doesn’t influence the game. For instance, imagine you’re playing a $1-$2 cash game, and you hold the A♣10♣ on a 9♣5♣3♥ board. The $200 you have in front of you is your last cash until payday and your opponent, who is sitting with a mountain of chips, moves all-in. A lot of players might get stressed out and consider a fold to preserve their stack.

On the flip side, imagine you’re a millionaire sitting in the same situation. Chances are you’re going to call and gamble on the flush draw.

There’s no universal answer to the question. You just need to figure out what the money means to you and act accordingly.

In tournament poker, there inevitably comes a crucial time called “the bubble.” That is the point separating those who fall short of making the money from those who cash. For instance, in a 100-player tournament, the top 10 players might get paid. That means with 11 remaining one more needs to fall before the money is made – translating into“you’re on the bubble”.

As the money bubble approaches, a lot of players like to tighten up and fold hands they might otherwise play. That’s because they risk ruin by getting involved,and if they just fold, they increase their chances of making it into the money.

Stack sizes are a crucial component in strategy come bubble time. Big stacks can afford to play with little risk of leaving empty-handed, so they might fold less in the hope of accumulating more chips. On the other hand, short stacks are handcuffed with the decision to either jam or fold. If they do the former, it’s likely with a strong hand, while the latter is more likely with the hope of surviving to the money. Medium-sized stacks are simply stuck in between and must proceed with caution.

Always be conscious of the money bubble. If you’re keen on cashing, folding mediocre hands is never a bad idea.

#4. What Sort of Opponent Are You Up Against?

This question is one of the most important things to ask yourself when deciding whether to fold. If a player is wild and playing a lot of hands, you should fold less against them. Conversely, if a player is super tight, barely entering a pot and suddenly wakes up with a big raise, you should almost certainly fold.

For example, you’ve been playing a $2-$5 No-Limit Hold’em cash game for a few hours. In that time, you’ve witnessed the player in Seat 1 play just a handful of pots, and it seems every time he’s shown a hand it’s been a powerhouse. A player then opened for $15 from early position, and you look down at the 8♣8♠ in the cutoff. You decide to raise to $45 and when action reaches that player in Seat 1, he or she four-bets to $95. The original raiser gets out of the way, and action is back on you. What should you do?

The answer is simple – fold! All signs point to this player having a monster hand, such as a bigger overpair. Even if he has a hand like A♦K♥, it’s still a flip, and that hand could be at the bottom of his range.

Now, take the same scenario but with Seat 1 being an ultra-aggressive player, maybe someone who’s indulged in one too many drinks, that you’ve seen raise with almost any two cards. You shouldn’t be so quick to fold a hand like pocket eights as it plays well against all the junk your opponent tends to have.

The big blind checks and you continue for 4,000. Your opponent then check-raises all-in for 40,000, which constitutes half your stack. What should you do?

First, you’ll want to calculate how many outs you have. Without knowing your opponent's exact hand, you can narrow it down a bit by asking what sort of hands he’d shove. Sets and two pairs make sense, as do straight and flush draws. For the sake of this example, let’s assume he flopped a set.

Do you know how many outs you have against say a set of sixes? The answer is 14 (any of the nine remaining hearts except the 3♥ -- so eight outs – plus the three non-heart deuces as well as non-heart sevens to complete the straight).

Given you know five cards for sure (the flop and your two hole cards), that leaves 47 unknown cards. Of those 14 will help you, so what are the odds of making your hand? You can find the answer by dividing your number of outs by the number of unknown cards.

Here’s a handy chart to help you associate your number of outs with the odds of hitting one. 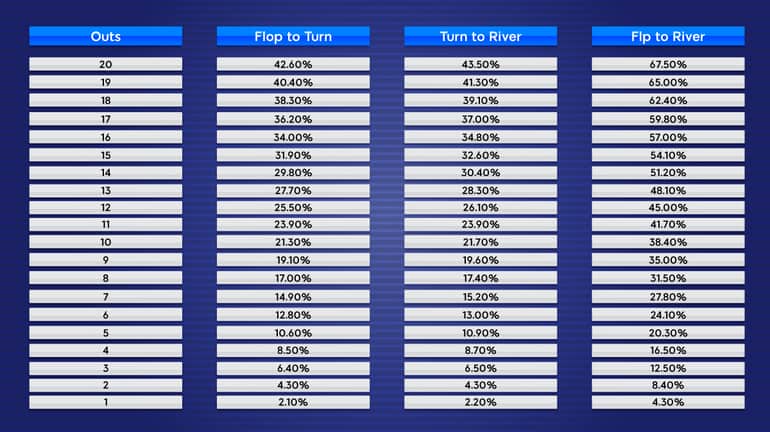 If your chances of getting there are high, then you should be less inclined to fold. If the opposite is true, then don’t be afraid to ditch your hand.

As Kenny Rogers says, “Every gambler knows that the secret to survivin' is knowin' what to throw away.”