What is Backdoor in Poker? 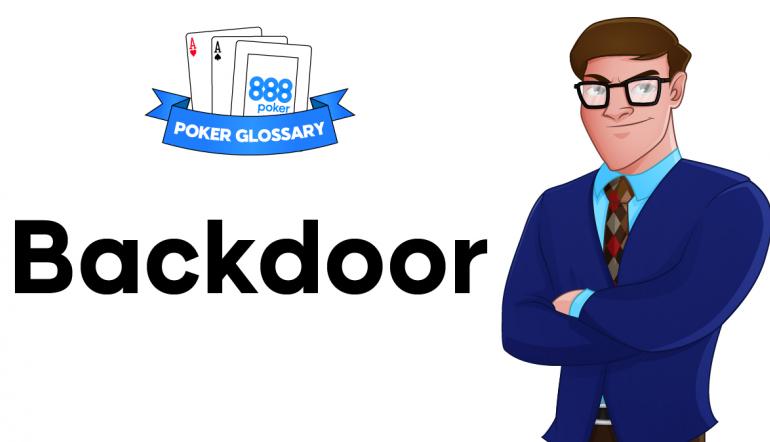 There are two primary types of backdoor draws. Backdoor flush-draws and backdoor straight-draws. Let’s see an example hand in No Limit Hold’em which has both of these.

To the untrained eye it might appear as if our hand completely missed the flop, but we have a both a backdoor straight-draw and a backdoor flush-draw here.

By backdoor draw we mean that it is possible to catch running cards (consecutive cards on the turn and river) to make either a straight or a flush.

Expert players look one step further and make distinctions between the different types of backdoor draw. (Novice players don’t do this. They might recognize a backdoor draw is possible, but they won’t think about analyzing its quality). As an exercise, let’s break down the quality of the above draw. Think about the following.

Let’s answer each of these questions as they pertain to the above example. The same questions should be asked for any backdoor draw we pick up.

1. Firstly, our backdoor flush is to the fourth-nuts, i.e a jack-high flush. Of course, on some turn cards (such as the Q♥) we might be drawing to the third or even second-nut flush.

2. There are two cards in the deck which give us a backdoor gutshot. (The King and the Seven).

3. There are two cards in the deck which give us an open ended straight-draw. (The Queen and the Eight).

4. All of the 4 cards which give us a straight draw on the turn are to the nuts.

As an example of this last point, imagine we instead hold the following hand.

Notice here that we technically have the same backdoor-straight possibilities as in our previous example. We have two backdoor gutshots and two backdoor open ended straight draws. It would be a mistake to assume that our backdoor straight-draws are of equivalent strength however.

The key differences are as follows.

2. Our straight-draw outs are less likely to be the nuts. In the above example, none-of-our backdoor straights make the nuts. Any time we runner-runner a straight, a higher straight will be possible.

Example of Backdoor used in a sentence -> We raised preflop and flopped a back door straight draw.

How to Use Backdoor as Part of Your Poker Strategy

The value lies in the ability to play turns aggressively when we pick up our backdoor draw. If we fire a continuation bet on the flop with a backdoor flush we’ll likely be able to fire a second barrel on the turn 20% of the time having roughly 18% pot-equity to make our flush by the river.

As such, good players carefully think about backdoor equity when deciding which hands they should continue with on the flop. This applies both as the preflop aggressor and the preflop caller. Good players will also generate a plan for the turn depending on which turn cards fall.

Imagine we have the opportunity to continuation bet on this flop texture when in position. We might elect to cbet the Q♥9♥ but check the Q♦9♦ because it doesn’t have good backdoor equity. Before firing the Q♥9♥ on the flop, we should make a plan regarding which turn cards are decent for a second barrel.

In this case we can barrel any heart, Queen, Nine, Ten or Jack. These cards either give us a flush-draw, top-pair or the nut gutshot.

Similar strategic plans can be made when we are the cold-caller. If our opponent fires a continuation bet against us, it’s necessary to have some marginal unpaired hands that we “float” with. We should naturally favour the marginal hands that have backdoor equity over those that do not. If we were to face a continuation bet OOP on the above board texture, we might check/call the flop with the intention of check/raising any heart, Ten, or Jack on the turn.