What is Squeeze in Poker?

A squeeze refers to a raise made when facing a bet plus a call from our opponents. Although the terminology could technically be applied to any such situation, it’s most commonly used to describe preflop situations in Omaha and Hold’em. I.e. it’s typically a 3bet made after there is an open-raise and at least one caller before us. It’s named squeeze because the initial open-raiser has to worry about the fact that he is not closing the action if he decides to call the squeeze. He is ‘squeezed’ between the 3better and initial caller. 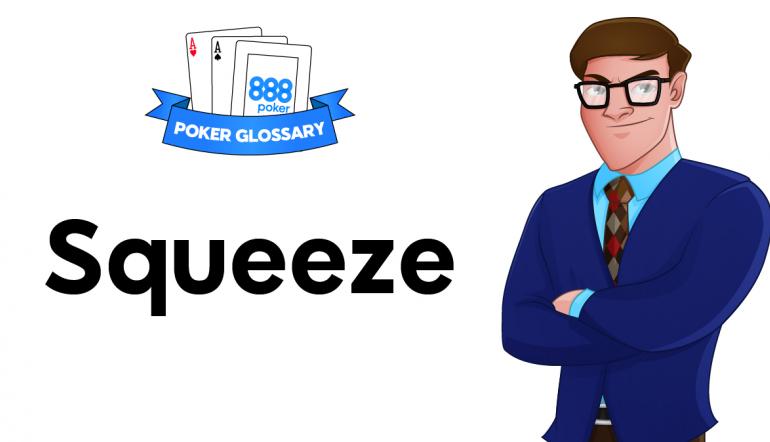 A squeeze typically occurs on the preflop betting rounds in games such as Hold’em and Omaha. It refers to a situation where there is a re-raise (three-bet) after an open-raise and one or more callers. In other words, it’s a three-bet made against two or more players at once.

For example, imagine the following -

Why is the play referred to as a squeeze? Because in this example the BTN finds himself “squeezed” between two players. Whatever he does, he needs to keep in mind that SB is still left to act after him. Even he decides to call the squeeze, he is not guaranteed to see a flop since the SB might 4bet.

In the above example, if BTN calls and SB 4bets it is referred to as a “4bet squeeze” since SB is 4betting against two opponents. In this instance, it would now be the BB getting “squeezed” since he needs to factor in what the BTN might do after him if he just calls.

Example of Squeeze used in a sentence -> Button open-raised, the small blind called and the big blind squeezed.

How to Use Squeeze as Part of Your Poker Strategy

Squeezing ranges should typically be stronger than standard three-betting ranges since they are made against several opponents rather than just one.

Standard squeeze sizings are also typically bigger than standard three-bet sizings. For example, against a BTN 3bb open it’s common for the blinds to 3bet to 9 or 10 big-blinds. If BTN opens and SB calls however, BB would usually now squeeze to 12bb instead of 9bb.

The general formula for calculating squeeze sizing is considered to be 3x + 1x for every cold-caller where x is the size of the initial open-raise.