What is Three-bet in Poker?

Three-bet (or 3bet)is the third bet (or second raise) in a betting sequence. There is a bet (1bet), a raise (2bet), and a re-raise which is the 3bet. It’s worth remembering that in games with blinds, the first bet on the first betting round is always the blind post, which is why a re-raise against a open-raise is known as a 3bet and not a 2bet. 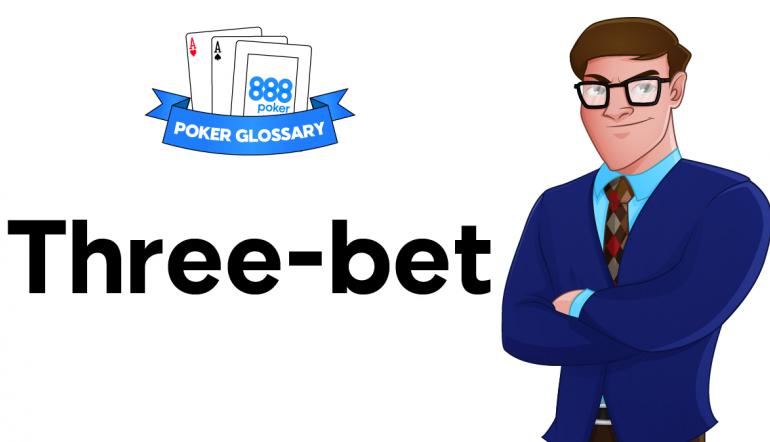 Example of Three-bet used in a sentence -> Our opponent open-raised on the button and we three-bet from the big blind.

How to Use Three-bet as Part of Your Poker Strategy

3bets happen routinely both preflop and postflop in the majority of poker variants. Postflop 3bets are a little less common since they are often heavily indicative of strength.

For example, in No Limit Hold’em and Pot Limit Omaha, it’s extremely rare for a player to 3bet the flop without holding a strong value hand. While some 3bets should be a bluff according to poker theory, many players only ever three-bet postflop for value.

The preflop betting rounds are a slightly different ball-game, since even the average recreational player has often been exposed to the idea of re-raising a preflop open (3betting) as a bluff. While the average player still 3bets way too tight of a range preflop, the line is less indicative of strength than a postflop 3bet.  As a rough guide, the later the street the 3bet occurs, the greater the amount of strength that is represented.

Many players advocate making use of polarized 3betting strategies preflop, although depolarized strategies are becoming increasingly popular from a variety of position at the table.

Polarized – Implies 3betting a selection of strong value hand and a selection of semi-bluffs. The semi-bluffs range will typically be comprised of speculative holdings such as suited connectors and suited-gappers. They don’t have a lot of raw-equity preflop but still have the potential to make big 5-card holdings by the river. These types of speculative 3bets are especially useful when facing opponents who fold too frequently to preflop 3bets.

Depolarized – Implies 3betting a range of hands for value/thin-value but never semi-bluffing preflop. Although the line between thin-value/semi-bluff can become blurred at times, a depolarized three-betting range won’t typically involve any of the lower ranked suited-connectors and gappers such as 57s. A depolarized 3betting strategy is especially useful when dealing with opponents who defend too frequently against 3bets.

As we increase complexity into a variant by adding additional cards, it becomes harder to describe strategies as depolarized/polarized. The lines between the different types of approaches become blurred. The general consensus regarding Omaha 3betting strategy is as follows -

One might describe this strategy as “polarized” (since we are 3betting a mixture of value and speculative holdings), but it could also be considered as “depolarized” since T987ss just so happens to be one of the best hands in PLO despite the fact that it doesn’t have as much raw-equity as holdings with bigger cards. Hence, the terminology itself loses importance – but the broad view generally accepted strategy is that advised above.

What Size Should Our Preflop 3bet Be?

Opinions vary on the best preflop 3bet sizing but in most cases it will be somewhere between three times and four times the size of the initial open raise. For example, if a player open raises preflop to 3bb a typical 3bet size might be 10bb.

What Types of Hands Should We 3bet Preflop in Hold’em?

It usually makes sense to 3bet holdings that have some type of potential to make a big hand postflop. Many players make use of a linear (also known as ‘depolarized’) 3bet range which simply means that we 3bet a selection of the strongest possible holdings we are dealt preflop. We would only 3bet very weak holdings preflop if our opponent is folding too much to 3bets.

Why is a Preflop 3bet Not the Second Bet in the Sequence?

What Size Should Our Flop 3bet be in Hold’em?

What Does My Opponent’s Range Look Like When He Calls a 3bet?

We usually know that our opponent doesn’t have the absolute strongest holdings (like QQ+, AK) since he may have decided to re-raise (4bet) preflop the majority of the time. He also won’t usually have extremely weak holdings since he would have either folded preflop vs the 3bet or not open raised in the first place. Our opponent is usually left with a range of relatively strong broadway hands, pocket-pairs and mid to high suited connectors.