What is Four-bet in Poker?

Four-bet or 4bet refers to the fourth bet (or third raise) in a sequence of bets. In games such as Hold’em an Omaha, it’s important to remember that the first bet on the preflop round is actually the mandatory big blind post. An open raise is hence called a 2bet, a re-raise is called a 3bet and the following re-raise is 4-bet. 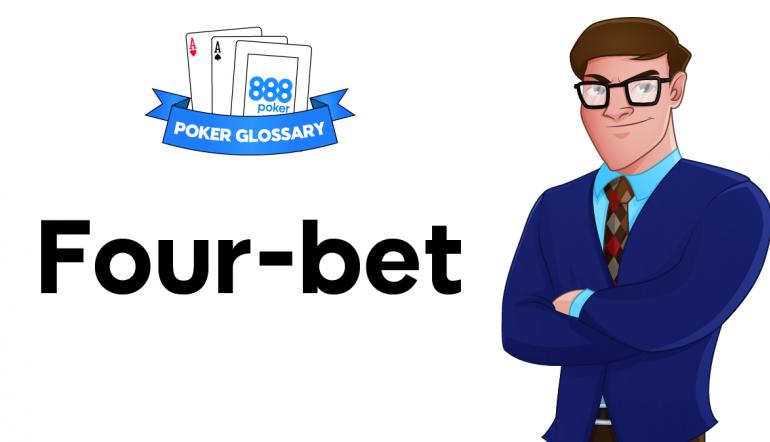 Example of Four-Bet used in a sentence -> Our opponent three-bet against our open so we put in the four-bet with our pocket Kings.

How to Use Four-bet as Part of Your Poker Strategy

Four-bets are somewhat rare during the postflop betting rounds. A postflop 4bet is very often all-in (apart from in fixed-limit formats), and typically implies the four-better has a very strong holding. Seeing as postflop three-bet bluffs are extremely rare, postflop four-bet bluffs are virtually non-existent in the vast majority of games.

Preflop four-bets are generally representative of less strength than postflop four-bets. A number of players have been exposed to the strategic idea of four-bet bluffing vs aggressive three-betters, so it’s certainly not impossible that any given four-bet ends up being a bluff in many games. Despite this, the majority of four-bet ranges are heavily weighted towards value. It’s naturally a lot less likely that a preflop four-bet is a bluff when compared to preflop three-bets.