Everything You Need to Know about 2-7 Triple Draw

Discover the basics to the new poker format – 2-7 Triple Draw where the best hands in Hold’em are the worst in this variation. Find out why and how to beat this game. 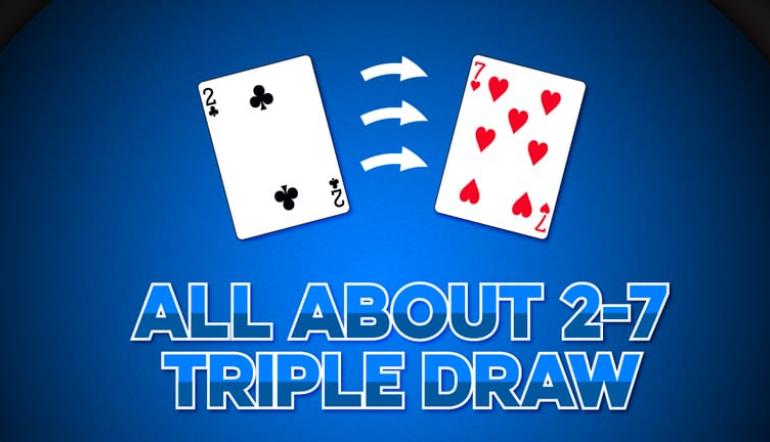 The draw typically occurs before each betting round and occurs three times in 2-7 Triple Draw hence the name “Triple Draw”.

The easiest way of describing a lowball format is with the phrase “worst hand wins”. This situation is not always the case since there are different ways of measuring lowball hands.

The lowball hand rankings used in Stud Hi/Lo and Omaha Hi/Lo are not the same as those used in 2-7 Triple Draw.

Let’s look at the full breakdown.

In some sense, 2-7 hand rankings are the easiest to learn because they are the complete opposite to Hold’em.

- Worst hand (in Hold’em) wins.
- Straights and flushes count against our hand.
- Aces are always high!

However, A,2,3,4,6 is not complete garbage since it still beats any hand with a pair or higher (worse).

The Basics: How to Make Hands in 2-7 Triple Draw

Making hands in 2-7 Triple Draw is more straight forward than in most other poker variants.

Players always have precisely five cards in their hand at any given moment. We do not need to worry about combining hole cards with community cards like we do in games such as Omaha and Hold’em.

Our hand is always the exact five cards we have in front of us.

2-7 Triple Draw is identical to Hold’em and Omaha in this respect.

There are four betting rounds in2-7 Triple Draw we use the terms “pre-draw” and “post-draw” to help us distinguish between them. (Post-draw being any betting round occurring after the initial draw.)

Each player is dealt 5 cards face down. The pre-draw betting round starts with the player to the left of the big blind and proceeds in a clockwise direction.

Once all the pre-draw betting is complete, players now decide which of their cards they would like to discard.

Players can discard any number of their hole cards, including all five. If players wish to keep their current selection of five cards, they have the option to “standpat” which means to draw nothing.

Starting with the small blind and proceeding in a clockwise direction, players announce how many cards they are discarding and draw the equivalent number of cards from the deck.

If (in the rare occurrence that) the deck runs out of cards, the discard pile can be reshuffled and treated as a fresh deck.

There are now three additional betting rounds, two of which are followed by an opportunity to draw.

The third of these three post-draw betting rounds will be followed immediately by Showdown. Confused?

Don’t worry, here is a quick map of the entire structure -

In a manner identical to Omaha and Hold’em, post-draw betting rounds start with the player in the small blind (or whoever is remaining immediately left of the button). The pre-draw round starts with under-the-gun (with big-blind acting last).

Once the post-draw betting action is over, players reach Showdown. Players reveal the strength of their five-card hand and the pot is awarded to the strongest (lowest in this context) hand.

The betting options are identical in the majority of poker formats.

Here is a quick recap of the legal options -

It’s essential to keep in mind that drawing additional cards carries the possibility of making our hand significantly worse. A decent low hand could end up picking up a pair or being turned into a straight/flush.

Although drawing may still make our hand worse in a variant such as 2-7 Triple Draw, it will usually only make the hand slightly worse (i.e. discarding a kicker and drawing an inferior one).

Drawing can sometimes entirely destroy our hand in 2-7 Triple Draw. If there is already a decent chance that we are head (usually based on the number of cards our opponent is drawing), it may not be correct to draw to a better low and risk damaging our hand.

On the other hand, if our made low is unlikely to be good (based on our opponents’ actions), we can “break” our hand and redraw for something better.

2-7 Triple Draw is primarily played with a fixed limit betting structure. The allowable bets on each street are identical to fixed limit Hold’em. Both games have four betting around and allow plays to double the size of their bet on the last two betting rounds.

However, in recent times, no limit 2-7 Triple Draw has become popular among higher stakes players online.