Follow along as pinpoint the 4 types of winning poker playing styles, categorise them and explain what makes each one profitable at the tables. 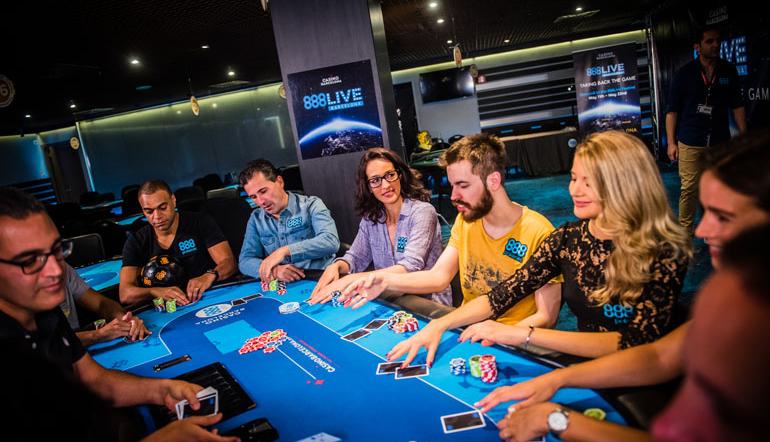 Does this mean that it doesn’t matter which poker style of plan we adopt? Not at all, some styles of poker produce winners more consistently than others.

If we had to generalise, we could group today’s winning players into 4 main categories.

This is not to stay that all four poker styles are equal. A good TAG will typically win at a much higher winrate than a rock. But before we get into the pros and cons of each poker style, let’s start by defining each of the four player types.

TAG stands for “tight aggressive”. It’s the poker style of choice for the majority of winning poker players out there.

The playing style is exactly as it sounds, characterised by “tight” and “aggressive” play. TAGs are extremely selective with their starting hands and rarely enter the pot voluntarily with trash holdings. A TAG will usually play around 18 to 25% of hands depending on whether the table is short-handed or full-ring.

Assuming a TAG elects to play a hand preflop, their postflop play will typically be characterised by aggression. They’ll significantly favour betting and raising over checking and calling. In this article you can find how to defend against TAG players

LAG stands for “loose aggressive”. The majority of LAGs are actually losing players, although the very good LAGs often make more money than the TAGs. LAG style involves noticeably more skill than a TAG style – so only very good players can typically make money this way.

LAG style shares similarities with TAG in that the postflop play is characterised by preference towards aggression rather than passivity. The critical difference is that LAGs play noticeably more hands preflop, including some trashy holdings when the situation calls for it. A typical LAG will play between 23% and 30% of hands depending on whether the game is short-handed or full-ring. In this article you can find how to defend against LAG players

Rock style is a tighter version of TAG style. Sometimes the term rock is used interchangeably with “nit”, although, in this case, we are using the term to describe the middle ground between TAG and nit.

As the online games increase in toughness, the number of rocks we can expect to see at the table on a given day is slowly growing. In some cases, rocks may even have previously played a LAG or TAG style with some success but had to adopt a tighter strategy to remain a winner in today’s competitive environment.

In most cases, rocks are not particularly skilled poker players. They often suffer from a range of psychological issues (scared money) and strategical problems (not understanding where and how to expand their ranges). However, what they lack in skill, they often make up for in having strong ranges and not needlessly spewing money with marginal holdings. This factor will frequently be enough to generate a small amount of winrate.

We might argue that it’s better to be a relatively unskilled (but winning) rock than a losing TAG/LAG constantly out of their comfort zone.

A Maniac (in the past they were sometimes also called “bombs”) is a hyper-aggressive version of a LAG. The vast majority of maniacs are significant losing players, although there have been some notable exceptions throughout history (Isildur1, for example).

To an onlooker, the aggression levels are seemingly nonsensical. The play style is characterised by relentless aggression both preflop and postflop along with liberal use of unorthodox bet-sizes (i.e. overbets).

A maniac will usually play more than 30% of starting hands (the exact number depending on whether the game is short-handed or full-ring). Many maniacs will even play over 50% of their holdings, although it’s worth noting that the more hands they play, the less likely it is that they are long-term winners.

Which is the best poker style?

Out of the four winning poker styles, we might naturally wonder, which one is the best? While all four techniques can be winning and carry unique advantages, the logical answer to the above question is TAG. Why TAG? Simply because the vast majority of winning players employ this style. It’s the perfect balance between profitability and skill.

Although LAG style can potentially produce a higher winrate, there is a relatively steep incline on the learning curve. The players who are good enough to make the form profitable have often been professional players for some time. If we are just starting out, LAG style might be a good way to blow through most of our bankroll, i.e. not recommended.

On the other hand, although a rock style involves even less skill than TAG, it’s also less profitable, in most instances. We’ll also find that we are not pushing ourselves to understand good poker fundamentals. If we are actively working on our theoretical understanding of poker, we’ll begin to see why playing as tight as a rock doesn’t really make sense.

Having said that, if we are struggling to make a TAG style profitable in the early stages of our career, playing a tighter rock style might allow us to be profitable. After all, it’s better to have a low winrate than a negative one.

While the maniac style might appear to be the most interesting, the extremely high skill requirement means that it is seldom a good choice. For the select few that make the style work, there is clearly a very fine line between genius and insanity.

Pros and Cons of Each Style 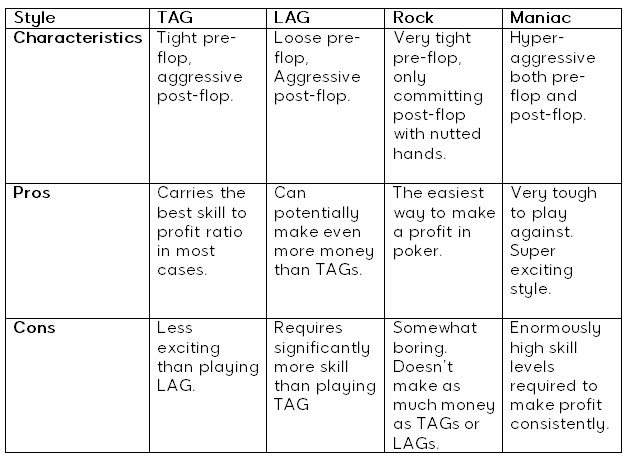 While understanding which types of poker strategy are most likely to produce profitable results is useful, it’s worth understanding that the best players switch between winning poker styles.

Rather than decide beforehand whether they categorise themselves as a LAG or TAG, good players have the ability to select their playing style based on the types of opponents at their table.

Let’s see how it works.

Playing against rocks – Perhaps we play a TAG style by default, but we notice that our table is full of rocks. TAG style will still perform ok in this environment, but it won’t necessarily generate the highest winrate.

So, how do we exploit players who play overly tight ranges preflop?

By loosening up and looking to steal the blinds more aggressively.

We might hence find ourselves playing much looser ranges than our default TAG style dictates. To an onlooker, it will appear as if we are playing a LAG or maniac style, but we are actually just looking to exploit our overly-tight rock opponents.

Usually, when a rock does enter the pot, we should tend towards giving them credit for having a strong holding. It’s important not to stress this point too heavily since every rock will have slightly different postflop tendencies.

It’s entirely conceivable that a rock might proceed to give up too frequently postflop even though they have entered the pot with a strong range. In such circumstances, we would continue our aggression postflop. On the other hand, if a certain rock rarely folds after entering the pot, we’ll completely cut down on all of our postflop bluffs.

Playing against maniacs – Maniacs are some of the most daunting opponents to face at the table due to their relentless aggression. Despite being tough to deal with, it’s worth remembering that it’s highly likely that the maniac at our table is a losing player.

So, how do we exploit players who are hyper-aggressive both preflop and postflop?

By tightening up and looking to use their own aggression against them.

The best approach is to be patient, biding our time, looking to make decent hands (usually a good top pair and better depending on the effective stacks). Once we flop well, we can use the maniac’s aggression to do the betting for us.

Since we’ll be looking to enter the pot preflop, our default TAG style might appear more like a rock style from an onlooker’s vantage point. We’ll generally avoid making any big bluffs postflop since maniacs don’t fold very much. But, as with all other player types, the exact strategy varies from player to player.

It’s not impossible that we encounter a maniac who is capable of folding vs aggression (the better ones do). In which case, we will look to take advantage of some bluffing opportunities postflop.

Playing Against LAGs/TAGs – Despite what it may sometimes feel like, LAGs and TAGs will usually provide us with the toughest competition at the tables. Especially in the case of TAGs, it’s more likely we are dealing with an opponent who is a decent winner.

So, how do we exploit LAGs and TAGs in our game?

Usually, by doing the opposite but doing it better.

In other words, many TAGs fold slightly too much in various scenarios. We can exploit this by loosening up where relevant. On the flip side of the coin, we can use a LAG’s aggression, by entering the pot with reasonably tight, solid ranges.

Of course, these are just general guidelines. The majority of the profit is going to come from isolating specific mistakes in our opponent’s strategy. For example, do they fold too much to preflop 3bets? We’ll increase our 3betting aggression. Do they bluff too much on the river? We’ll bluff-catch wider.

It’s also worthy of note that in the context of discussing winning players, we shouldn’t really be going out of our way to play pots against strong winning opponents.

Even if we can generate an edge, it will be marginal, and there is always the possibility that we damage our winrate, assuming our opponent is better than us.

So, while it’s useful to have some tricks up our sleeve against strong opposition, we should generally target player types who are not mentioned in this article, for example -

Of course, it’s entirely possible that a LAG, TAG, rock or maniac could also present us with an extremely soft target. Just because we classify an opponent as a “TAG” does not necessarily always imply that he is a good player.

As we progress in our understanding of opponent types, we’ll be able to distinguish between a good TAG and a weak TAG.