Do you find it difficult to defend against tight-aggressive (TAG) poker players? Inside you'll find some handy tips and tricks for beating TAGs. 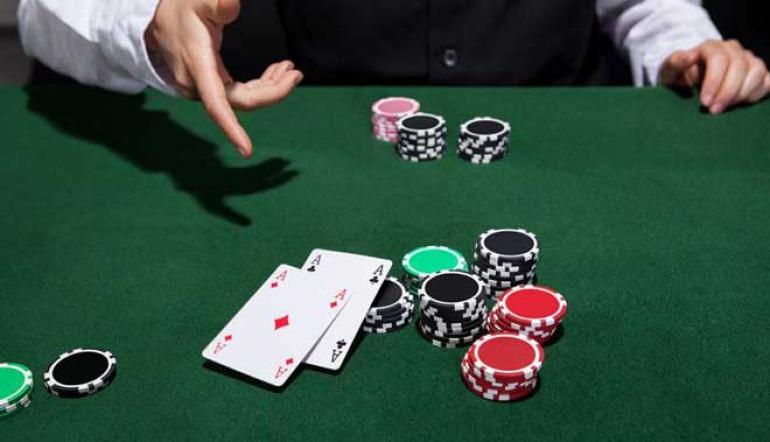 What is a TAG?

TAG stands for “Tight-Aggressive”. These players have a tendency to select only strong hands preflop. They prefer to have the betting lead (initiative) and are, therefore, more likely to be the preflop open-raiser, or 3bettor, as opposed to the preflop cold-caller.

Before we get into the technical stuff, how exactly can we identify any TAG opponents sitting at our tables? These are the guys that typically fly below the radar. We may not even notice them that much at first, because most of their hands are going into the muck preflop.

When they do decide to play a holding preflop, they are very often going to continue their aggression postflop because they have a strong hand. Assuming they get to showdown, we are unlikely to see uncoordinated preflop holdings such as J6o. They will usually end up having some sort of pocket-pair, Broadway holding, or premium suited-connector.

Now, let’s look at some technical details regarding TAGs. Feel free to skip to the next subheading if you are not interested in the nitty-gritty.

It’s common to use the following statistics to analyse the tendencies of online players. It’s good to be familiar with the terms since we will see other poker players referring to them a lot.

VPIP – Voluntarily Put In Pot – Essentially this tells which percentage of all hands this player decides to play. The exact VPIP a TAG has will depend on whether they are playing 6-max of full-ring variants of poker.

PFR – Preflop Raiser – This statistic records the percentage of hands which are played aggressively preflop. Naturally the value of PFR will always be lower than (or possibly equal to) the value of VPIP. This is because it’s impossible to play a hand aggressively without voluntarily putting money into the pot.

Seeing as TAGs prefer to have the betting lead there will rarely be a difference of more than 5% between a TAG’s VIP and PFR. If the difference becomes more than this, we are potentially no longer dealing with a tight-aggressive opponent but a tight-passive opponent.

The Fundamental Weakness of TAG’s

TAG is a great style to play, especially for beginners. It's recommended that, if we are first starting out at poker, we try and adopt a tight-aggressive approach. This way we can make the most money with the shallowest learning curve. However, the majority of strategies in this game have a counter-strategy, and TAG strategy is no exception.

The truth is that the majority of TAGs are not prone to taking risks. If they were, they would often end up being LAG (loose-aggressive) players instead. TAGs do not like to play big pots with marginal hands.

Therefore, the way we defeat TAGs is to put pressure on them when they are unlikely to have a strong hand. However, we should tend towards folding when they are betting into us on multiple streets. Let’s see how we can apply this information in a selection of different situations.

TAG players often give a large amount of respect to preflop 3bets. This is partly because they 3bet such a tight range themselves, and assume that other players are following a similar type of logic.

Since TAGs are not prone to taking risks, they will be reluctant to call 3bets or 4bet bluff overly aggressively. We should look to exert maximum pressure preflop with decent bluffing hands.

On the other hand, if a TAG decides to 3bet when we open, we should often treat this with a little more caution than usual. The chances of our opponent holding a decent value hand are significantly higher than when we face a 3bet from a loose-aggressive opponent. TAGs will typically 3bet about 4-5% of hands preflop whereas the average LAG will 3bet anywhere between 7-10%. 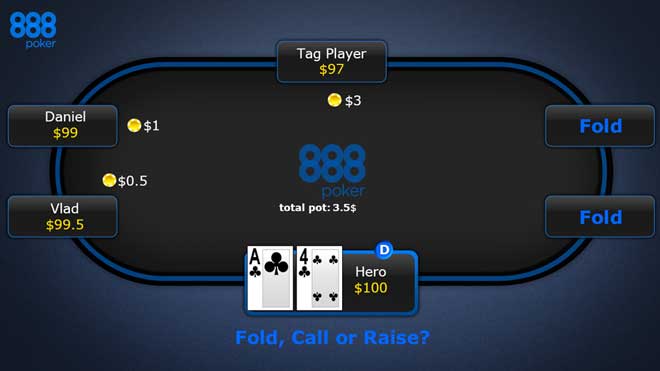 Typically, we can’t call in this situation, especially given that our opponent is a TAG; the hand simply won’t be strong enough. We are also aware that their opening range from UTG is a lot stronger than average. Surely, it would be a better idea to attack their later position opens with 3bets.

This can be true to an extent, but here’s the thing: given they look strong, we potentially look even stronger if we 3bet. We would be 3betting despite the fact that they are opening from early position. This kind of situation can play up on a TAG’s tendency to avoid marginal situations. They have a strong hand that they don’t want to give up on preflop. But, by the same token they won’t be inclined to take the risk with extra chips when they know there is a huge chance we have AA/KK.

If a TAG ever 4bets in this spot, we will be absolutely crushed and can find an easy fold. They likely won’t even 4bet AK, preferring just to flat-call out-of-position.

Given the average TAG open-raises 13% of hands and continues with around 3.5% of hands when facing a 3bet, it typically means they can fold over 70% of the time in this spot. This fact allows us to generate profit without even seeing a flop.

Let’s now consider a situation where we are the one facing a 3bet. 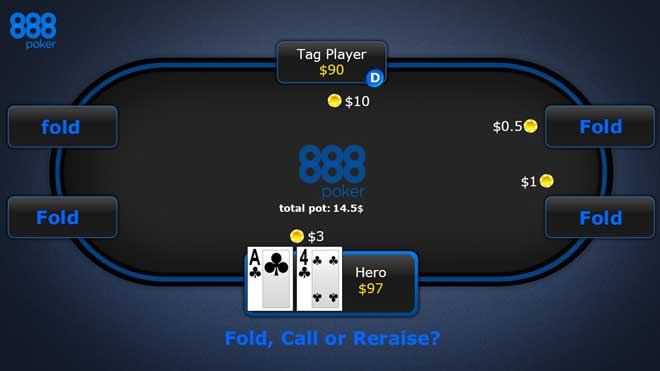 We’ve talked about how this is a great spot to represent a lot of strength. However, just because it’s a good bluff opportunity does not mean that a TAG will be understanding or utilising this fact. Remember that TAGs are often somewhat risk-adverse and will be scared about 3betting against an opening range they consider strong. As such, in this situation, the TAG really will have a premium holding the majority of the time. This is not the right situation to be making a move – we should be folding much more often than not.

We’d be foolish to assume that all TAGs play an identical style. The truth is that some will bluff a lot more than others. A good TAG should bluff somewhat frequently since it’s easier to represent value-hands with a tight image.

However, the majority of TAGs do not bluff that much and are mainly playing for value postflop. So, if a TAG starts betting into us, especially over multiple streets, we should be able to make some pretty big laydowns. 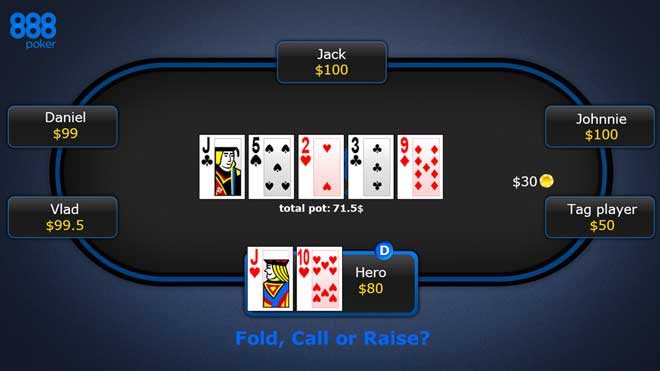 It’s certainly true that we still hold top pair, and there is a chance we might have the best hand. However, if we think about the types of hand our opponent will be value-betting for 3 streets, there are literally no worse poker hands. Something like J8 (the next worse hand), is simply not strong enough to fire for value like this.

So, the only time we win in this situation is if our opponent is bluffing. How likely is this? The likelihood of a bluff really depends on the type of opponent we are facing, and in this scenario we are facing a TAG, the type of player who is often risk averse. The chances of him firing 3 streets on a bluff are reduced dramatically.

Our top pair is basically garbage here, and a very easy fold against an average TAG.

Given that a TAG generally plays their made hands aggressively, it can be a huge giveaway when they start checking. In the majority of cases, a check from a TAG indicates weakness. Note that this mainly applies to situations where the TAG is the preflop-aggressor, as will be the case most of the time.

The first part of this hand is somewhat standard. We have a hand that is clearly strong enough to cold-call and we flop a gutshot and backdoor flush-draw, which means it would incorrect to consider folding on the flop.

However, rather than firing the second barrel, our TAG opponent decides to check. At this point, alarm bells should immediately start ringing in our head. Why? Our opponent is almost never strong here – most TAGs would continue to barrel with any set, overpair, 2pair, or top-pair combo. Most of the time they are going to have a hand that they planned to cbet with and then give up.

Some players would mistakenly check back here, reasoning that they have a gutshot. They don’t want to get blown off their hand in the unlikely scenario that our TAG opponent decides to check/raise. However, this will happen so infrequently, and our opponent will fold so often if we bet, that betting will nearly always be the stronger choice. There is a secondary advantage in that we build a pot, meaning we can get a bigger payout on the river if we hit our gutshot.

The way we defeat a TAG is by attacking all the small pots that they are not interested in. When they start putting a large amount of money in the middle, they nearly always have it. We should be able to make some big laydowns. When we fold a strong hand in a situation where a TAG has an even stronger hand, we are exploiting them in a big way.