How do we know if our (Pot Limit) Omaha Hi holding is playable preflop? Read on as 888poker provides you with some guidelines. 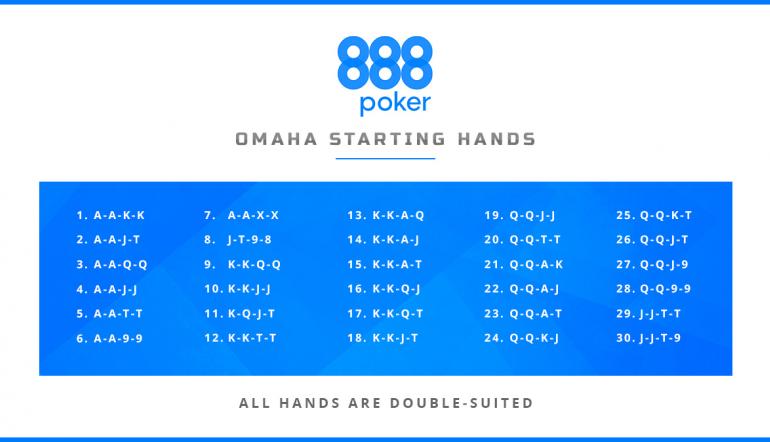 Omaha starting hands are ranked in order of strength with AAKK double-suited being considered the best in Pot Limit Omaha (PLO) games. Determining the strength of starting hands in Omaha will help you make better decisions when selecting which ones to play.

The best starting hands in Omaha are:

The number one most important principle for hand selection in PLO is that all four cards work together to make a hand.

But isn’t it true that in Omaha, we can only use two of our four hole cards to make a hand? So why do we say that all four cards must work together?

Let’s take a look at the following hand -

This is actually one of the best starting hands in Omaha aside from AsAdKsKd, which is typically considered to be the best.

To the untrained eye, it might initially look like AsAdJsTs is the stronger holding because it has 3 spades instead of just two. Can you see why this is actually a significantly weaker holding than the AsAdJsTd?

The idea is that when we hold the AsAdJsTs, we are actually “blocking” our own outs. It’s important to remember that we can only use two of our hole cards to make a hand. A common beginner mistake in Omaha is to see a flop of 6s7s2d when having the hole-cards AsAdJsTs and thinking that we have a flush because there are 5 spades out there.

We don’t. We just have a flush draw because we can only use 2 of the cards in our holding.

Having that third spade now means there are fewer spades left in the deck for us to hit, thereby lowering our chances of completing our flush draw.

From that first principle (four cards working together), we should already be able to think of other non-favourable preflop holdings.

One term that is commonly use amongst PLO players is the term dangler. A dangler is typically a low card that does not help the four card hand in any way.

Imagine we are dealt -

Can you spot the dangler here?

The AsKsJd all work reasonably well together. The two spades can help us to make a flush, and the A, K, J work well to help us flop straights and straight draws. That 6c is really useless, though. It doesn’t help us in any way.

Hands without strong co-ordination, i.e. hands with a dangler, should usually be going in the muck preflop. The exception might be that we are in late position and feel that we have a good shot to steal the blinds.

Even though that 6c turns a potentially strong hand into a mediocre one, it could be worse. Given what we have said previously, can you think of a way to modify one of the suits in the above hand and make it even weaker?

Well done if you got it: AsKsJd6s

Once again, this might look like an improvement at first glance, but it really isn’t. It’s pretty much the same hand except we have now lowered the chances that we hit a flush postflop, making it a slightly weaker preflop holding. The 6s “blocks” our flush-draw outs. We can refer to it as an unfavourable blocker.

Let’s look at another example of how blockers can weaken the strength of our preflop holding: QsQcKsKc

This is actually a very good preflop holding; there is no blocking going on here. We can make straights, flushes, and top-set. Not bad.

Wow! Trip queens. Great, right? Nope. This hand is total garbage. One of the great things about having QQxx is that we still have two Queens left in the deck that we can hit. With the above holding we now only have 1 card left in the deck that can improve us to Trips. We’ve also lost the "double-suitedness" of the hand.

If we extend this principle a little further, we can arrive at what is considered to be the weakest starting hand in Omaha: 2s2h2c2d

Because of course, this isn’t really Quads. It’s actually just a pair of twos where we have all of our outs blocked. We have no chance of making Trips. In many cases, we are simply going to have a pair of Twos at showdown.

Sometimes, we might have two-pair or a full-house but it’s still going to be an extremely weak holding, and very unlikely to win at showdown.

Seeing as many players who hit the Omaha tables have started out playing No-limit Hold’em initially, it’s usually worth spending a little bit of time stressing some of the important differences between the two.

AAxx, and KKxx are not always the nuts. If we come from a Hold’em background, we are possibly used to stacking off with KK and AA preflop regardless of the situation. In Omaha, this can be a big mistake (assuming we are playing the pot-limit or no-limit variety).

Firstly we should keep in mind that AAxx and KKxx are a lot more common in Omaha since we are dealt 4 cards instead of 2. This means that stacking off with KKxx is nearly always a little dicey and that AAxx is not always the nuts.

Something like, AsAc9d4h is actually a pretty mediocre hand in Omaha. Notice how there is very little coordination between the 4 cards.

Something like the aforementioned, AsAdJsTd is a much better choice for a preflop stack.

Be Careful With Sets. Usually in Hold’em something like 22 is a pretty playable holding, and we are reasonably happy if we hit our set. In many cases, we are good to go broke with 100bb effective stacks. In Omaha, this will be a huge mistake. Ideally we want to go broke only with top-set, and this means that 88xx+ are better considerations for set-mines than something like 22xx which can never make top set.

This principle can also be applied to making dominated flushes. Because all players have 4 cards, making strong holdings is a lot more common. Something like the 2nd nut flush is a strong hand in Hold’em, but in Omaha we are often on extremely shaky ground and should avoid stacking off postflop where possible. This kind of mindset should factor into our preflop hand selection.

Something like, Ts2dTd3s might look like a great holding because it is double-suited. But in reality it can cause us a number of issues postflop since we are likely to make a dominated flush.

There is one other important type of holding to mention in Omaha: Rundowns.

Rundowns are basically the equivalent of suited connectors in Hold’em. They don’t usually have as much raw poker equity as big card holdings, but they have great potential and an element of deception.

Like all other Omaha holdings, rundowns work best when they are double-suited: Ts9d8s7d

Rundowns are capable of flopping wraps. Wraps are the Omaha term for straight draws with many outs. Given that we have 4 cards it’s possible to have up to 20 outs with a flopped wrap.

Rundowns don’t have to be directly consecutive – they are differentiated in strength by where the “gap” occurs.

For example, Ts8d7s6d is a type of rundown, but there is a gap between the top two cards. We can describe this holding as “Ten-high rundown, top gap”.

Therefore, the above “Ten-high rundown with bottom gap” is considered to be slightly stronger than the previous holding.

Principles, such as the ones described in this article, should be the number one way we think about our preflop holdings. Having a hand chart is not realistic because there are 16,432 starting hands in PLO. This is assuming the suits don’t matter since suits have no relative value. If we included the suits, there are 270,725 combinations of preflop holdings.

So, rather than memorise all the preflop holdings, we want to make principled decisions on case-by-case bases. And we should always remember the most important law in Omaha preflop selection, all four cards should work together.

Check out our list of the best Omaha strategy books.

Question 1: What is the best starting hand in Omaha?

Question 2: What is a dangler in an Omaha starting hand?

A “dangler” in Omaha is used to describe a hole-card that does not contribute significantly to the overall strength of the hand. For example, with the holding AKQ6, the 6 is referred to as a “dangler” since it is a low card not connected to the other hole cards.

Question 3: What is nuttiness in an Omaha starting hand?

Nuttiness refers to the ability of an Omaha starting hand to make the nuts postflop. Holdings with big cards and holdings suited to the Ace typically score high in terms of nuttiness.

Question 4: How many hole cards can you use in Omaha?

Question 5: What is smoothness in an Omaha starting hand?

“Smoothness” refers to an Omaha starting hand’s ability to flop a large amount of straight draws and flush draws; example: T987 double-suited. The opposite term is “polarized” and describes an Omaha starting hand that is only likely to flop well in one key area; example: KK72 rainbow (it usually only does well if it specifically flops a set of Kings).

See our story about the best Omaha poker starting hands.