Everything You Need to Start Playing Razz

Razz is the lowball version of 7-Card Stud with the same rules and one big exception – the low always wins! Learn how to play this exciting poker format. 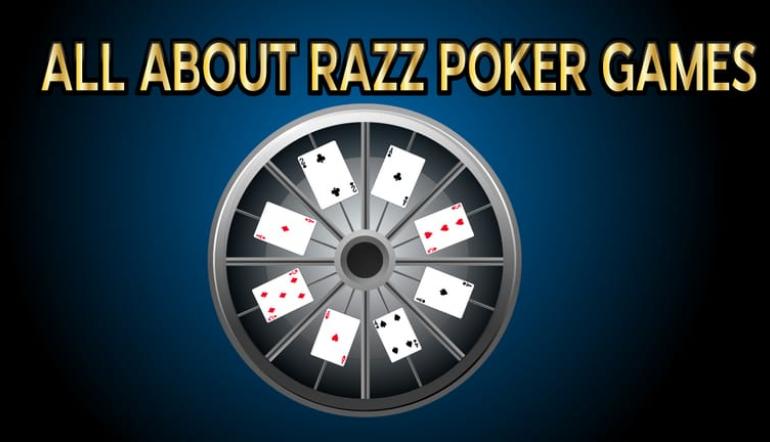 Razz poker is the lowball version of Seven (7) Card Stud. The flow of action is identical to Seven Card Stud - aside from the lowball hand rankings.

For this reason, it has grown in popularity over the years – particularly among high roller players. It also forms part of the mixed games schedule at the prestigious World Series of Poker (WSOP) for many years. It’s the R (Razz) in their H.O.R.S.E tournaments.

Bear in mind, that although Razz is a lowball game, the hand rankings will differ from some lowball games like 2-7 Triple Draw.

With that said, let’s start with the basic Razz hand rankings.

Not all lowball hand rankings are the same. The system employed by Razz is identical to the classification of low hands in Stud Hi/Lo and Omaha Hi/Lo - but not the same as the system used in 2-7 Triple Draw.

Here are the rules -

The nuts in Razz is, hence, “The Wheel” A,2,3,4,5 which contains the lowest 5-card hand possible. In all fairness, this hand is technically a straight, but this is irrelevant in Razz.

In scenarios where two players have the same top card, the naming of the hands includes as many of the additional cards as necessary to determine the winner.

The Basics – Making Hands in Razz

Razz is a Stud format which means there are no community cards (aside from one specific exception if the deck runs out of cards).

By the final betting round, each player at the table will have received seven cards. Players are free to select the best five cards out of these seven to construct their hand.

Although upcards still belong exclusively to the player, they give a window into the type of hand our opponent might be likely to have. By the final betting round, we’ll be able to see four of each opponents’ seven cards.

A player’s upcards in Razz (and Stud) are typically referred to as his board. The strength of our own hand should always be considered relative to our opponent’s board and how likely he is to be strong etc.

The layout of each player’s hand in Stud variants as follows.

In the first betting round (known as Third Street) players are hence dealt two downcards and one upcard.

Stud variants follow an entirely different structure to games such as Hold’em and Omaha. For a start;there is no button. Instead, the action is determined by the value of each player’s upcards. In the first betting round, the highest (worst) hand kicks off the action while on all subsequent streets the best (lowest) hand is the first to act.

Before any action, however, antes need to be placed in the pot. Antes are somewhat similar to the blinds in Texas Hold’em with the key difference being that all players must pay the ante every round.

The stakes in Stud games usually include a description of the size of the antes.

Note that three values are used to describe the stakes of a Razz (also Stud) game. The small bet, the big bet and the ante. The ante is relatively insignificant relative to the small and big bet. “Small bet” and “big bet” are terms that apply to any poker game with a fixed limit betting structure.

Once each player has placed the ante into the pot, the cards are dealt.

The streets (or betting rounds) in Stud variants are called after the number of cards each player has on that street. Therefore, Third Street (despite being the first betting round) is called “third” street because each player is dealt 3 cards.

Players are dealt two downcards followed by one upcard.

At this stage, we’ll be able to see one upcard for each of our opponents at the table.

The betting action starts with the player who has the highest (worst) upcard.

Aces are always low, meaning that a King is the worst possible upcard in Razz. If two players have the same ranked upcard, there is a tiebreaker based on suits, which will be discussed in the “additional considerations” section below.

The player with the highest (worst) upcard is forced to pay what is known as the “bring-in”. It values somewhere between the size of the ante and the smallbet. Assuming stakes of $1/$2/$0.15, a logical bring-in size might be $0.40. It’s a fixed value that is part of the game’s structure even if it is not always explicitly listed as part of the table stakes. (So, there are actually four values that describe the limits of a Stud/Razz game, small bet, big bet, ante and bring-in.)

After a player has paid the bring-in, the action starts with him.

He has two options -

All bets and raises on Third Street occur in increments of the small bet.

Once the betting action on Third Street is complete, each player at the table is dealt another upcard for a total of four cards (two up, two down).

This time action begins with the player who has the lowest (best) ranked upcards.

Both up cards are taken into consideration. If two players both hold an Ace (the best possible upcard) then the second card is consulted to see who acts first.

Once the first-to-act player has been determined, another round of betting takes place.

All bets and raises on Fourth Street occur in increments of the small bet.

Another upcard is dealt to each player at the table for a total of five cards (two down, three up).

As usual, the action begins with the player who has the best-ranked upcards.

This time the betting action now proceeds in increments of the big bet.

Another upcard is dealt to each player at the table for a total of six cards (two down, four up).

The betting action continues in increments of the big bet.

A final card is dealt to each player, face down this time for a total of seven cards (three down, four up). A final betting round takes place in increments of the big bet.

If there is more than one player left in the hand at the end of the betting round, Showdown is reached.

Players reveal the strength of their hand, and the best hand wins the pot.

The betting options in Razz are similar to the majority of other poker formats.

Here is a quick recap -

Since most Razz games are fixed limit, the size we can bet/raise at any given moment is based on the size of the small bet or big bet (whichever is being used on the current street).

Bring-in Tiebreaker – If there are two high cards of equal rank dealt on third street, a tiebreaker is used to decide which player must pay the bring-in. The ranking of the suits from low to high are as follows -

So while spades are considered the highest ranked suit, we are actually looking for the lowest possible suit when playing a lowball game.

Here is a quick example -

Player 1 has to pay the bring in here because he has the highest (worst in Razz) ranked suit.

Fourth Street Tiebreaker – Ties on Fourth Street are somewhat rare because it means that two players must have two cards of equal rank.

In such instances, the suit of the highest (worst) ranked card can be compared to determine whose low is the strongest.

Player two gets to act first here because his Three is of a lower (better) rank (according to the suit).

Running Out of Cards – Razz is typically played with a maximum of 8 players. Some basic maths reveals that if all 8 players stay in the hand until the river, 56 cards will be required to distribute 7 to each player. With only 52 cards in a standard deck, this is obviously not going to work.

In such a circumstance, players are not dealt the seventh card individually. A lone card is drawn from the deck and placed in the centre of the table as a community card, which all players can use to construct a five-card hand.

This scenario virtually never happens, however, since it’s unusual that so many players would elect not to fold on the earlier streets.

Fixed Limit Caps – With fixed limit betting structures, there is a limit to how many times players can raise on each street referred to as betting caps.

While such rules could technically vary from place to place, the commonly accepted cap for fixed limit games is one bet and three raises.

For example, on Fourth Street:

Player 1 now only has the option to either call or fold. Due to the betting cap, re-raising is no longer an option.

Of course, once the next street is dealt, the betting cap is reset.

Showdown Ties – Although suits are used to determine who acts first on each street, they are ignored at Showdown.

If two players make the same hand, the pot is chopped, regardless of the suits involved.