7 Card Stud is widely known as one of the oldest poker variations. Find out the rules and how to play this classic poker game in a few easy steps. 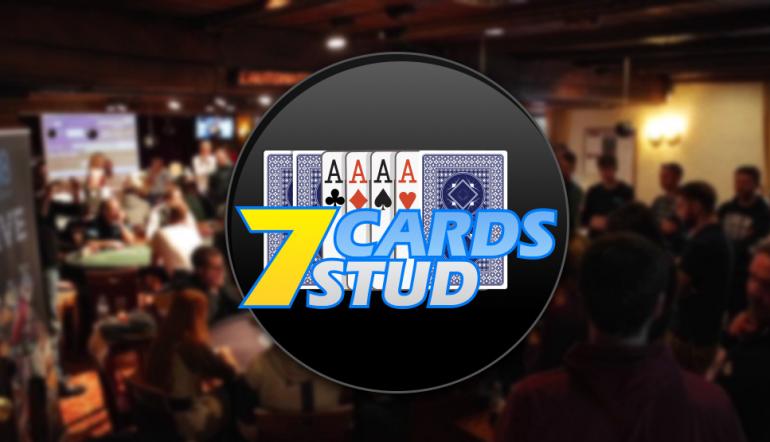 Dating back to the mid-1800’s, 7 Card Stud is a style of poker has been around a long time and was easily the most common form of poker into the 1980s when Texas Hold'em took over the number one spot. It is thought to have originated in America’s Mid-West, but it's very different to Texas Hold'em.

What is 7 Card Stud?

For starters, instead of 5 community cards, each player receives their own individual board (consisting of up to 7 cards!) For this reason, only a maximum of eight players can play at a Stud table at any given time. However, like Hold’em, the best five-card poker hand still wins the pot. So, even though 7 Card Stud features 7 cards dealt to each player by the river, only 5 cards on a player's individual board can be used to make the best 5-card hand.

Now that we’ve touched on the basics, here’s our simple and easy-to-follow guide on 7 Card Stud to get you started.

How to Play Seven Card Stud

Seven Card Stud does not include any blinds. Instead, players have to pay an ante at the start of every new hand. Each player is dealt 2 cards face-down (downcards) and 1 card face-up (upcard). There is a forced bet called a “bring-in”. The player with the worst upcard (the 2 of clubs is the worst possible), at the start of each hand, must post this compulsory bet.

Firstly, an ante is collected from each player and then the first 2 cards (technically 1st and 2nd Streets) are dealt face-down; a third card – called 3rd Street – is dealt face-up. The bring-in (player with worst upcard) is first to act, and they must put in the minimum bet or “complete” to the lower limit stake. Action continues around the table with players being able to fold, complete or raise (if there is a prior completion).

Note that the completion is not considered a raise. For example, in a $10/$20 the lowcard (bring-in) opens for $5. If the next player increases the bet to $15 (completes the bet), up to three raises are then allowable.

During 4th Street, another card is dealt face up to each active player. The table stakes are still set at the lower limit. Good news for the bring-in: First to act is no longer the player with the worst upcard! The player with the best upcards gets that honour. Action continues clockwise around the table with players being able to check, bet, call, raise (capped at 4 x table stakes in a limit format) or fold – depending on the prior action.

On 5th Street, the minimum bet is raised to the upper table stakes limit. Time to start building the pot! This card is also dealt face-up. Again, first to act is the player with the best upcards. Action continues around the table with players being able to check, bet, call, raise (capped at 4 x table stakes) or fold – depending on the previous action.

By the time 6th Street is dealt, each player remaining active in the hand should have 4 cards face-up, and two face-down (“in the hole”). First to act is still the player with the best cards/ hand showing. Players can check, bet, call, raise (capped at 4 x upper table stakes) or fold – depending on the prior action. But, if you don't have the makings of a hand by now, we suggest you might want to fold.

During the 5th betting round (also called the River), players are still able to check, bet, call, raise or fold. Now it's time for the Showdown, as long as 2 or more players remain. At this stage, the player with the best 5-card hand, according to the standard hand ranking system, will win the pot.

Also, if there are more players left on the river than cards in the deck, the does not burn, so that each player can receive a fresh card. A common or community card will be dealt face-up in the centre of the table for all active players in the hand to use. The player who is now high using the common card starts the action in the last round.

Even though 7 Card Stud features7 cards dealt to each player by the river, at showdown, only 5 cards on a player's individual board can be used to make the best 5-card hand. The hand rankings are exactly the same as in Texas Hold'em, with a Royal Flush being the best possible hand and High Card being the worst.

Not that, suits don't count in the Stud Poker Hand Ranking system except for deciding the bring-in, where Clubs are the worst, Diamonds are third, Hearts are second best and Spades rank top. 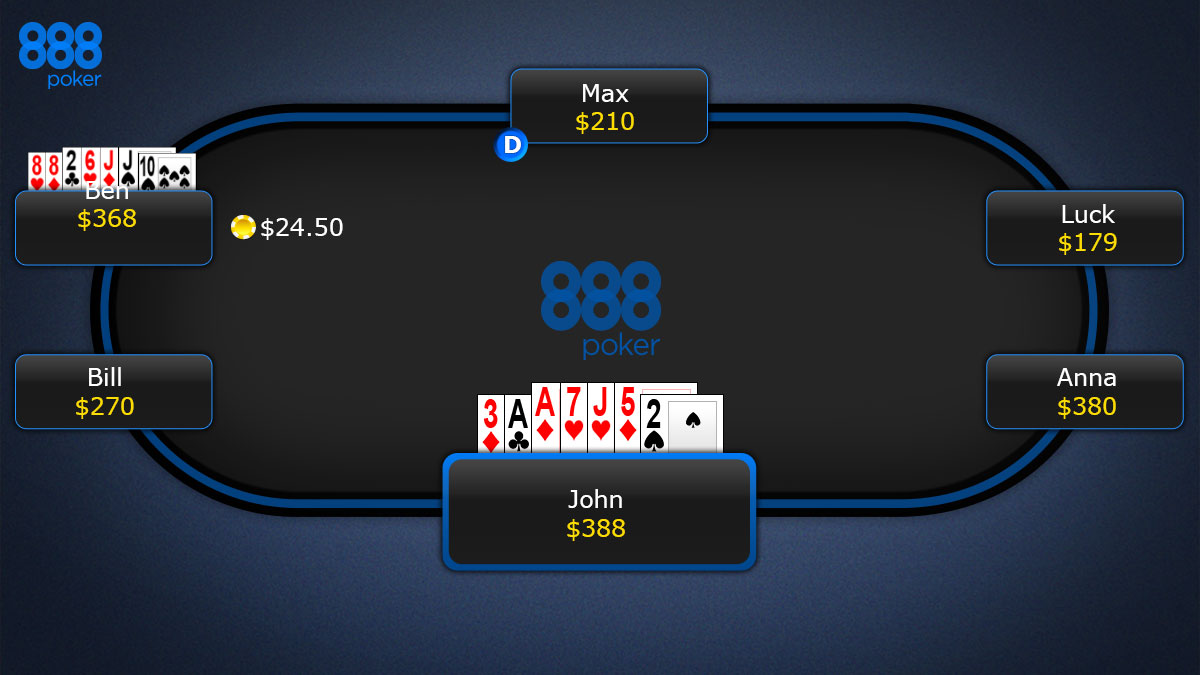 In a game of 7 Card Stud, each player must pay and ante before being dealt two cards face-down and one card face-up. Over four betting rounds, 4 more cards are dealt with 3 face-up and the last card being dealt face-down.

At showdown, the best 5-card hand wins the pot. Most 7 Card Stud games are in a limit format with a smaller bet wagered on 3rd and 4th street that doubles on 5th, 6th and 7th street. There is also a bring-in bet that is akin to a blind that the player with the worst upcard on 3rd street must pay.

If there is an open pair on fourth street, any player has the option of betting double the smaller bet.

7 Card Stud Rules of the Game

In a full ring $2/$4 Seven Card Stud game of 8 players, everyone pays their $0.50 ante. Each player then receives two downcards and one upcard:

Seat 2 shows the worst upcard – 2♦, therefore, they must place the forced bet of $1 – more commonly known as the bring-in. They have the option to bring-in for the minimum or complete to the lower stake ($2). Seat 2 decides to place the bring-in.

When the fourth card is dealt, Seat 1 is still high when dealt a 2♣. Seat 8 receives a J♠. Seat 1 is first to act on this street with the best hand showing – ace-high. They check-call Seat 8’s bet of $2.

Stud Hi-Lo is a variation of 7 Card Stud where the best high hand takes half the pot, and the best low hand takes the other half. If there is no qualifying low hand (8 through Ace), the high hand scoops the lot.

The rules and betting rounds in the Hi-Lo version of Stud are the same as the Hi - the one is the Low, meaning that two or more possible hands can win the pot on the river.

Razz is one of the more popular Stud variations and, in fact, is played in many World Series of Poker tournaments. It is simply Seven Card Stud played exclusively for the Low unlike 7 Card Stud or Stud Hi-Lo, and it is a game that is played in dealers’ choice cash games, as well.

Beginners
Cash Poker
About the Author
By
Chad Holloway