Top 5 Tips for Playing the Flop in No Limit Hold'em

In No Limit Hold’em, decisions made on the flop will influence how the rest of the hand plays out. Find out how playing the flop well can up your winrate. 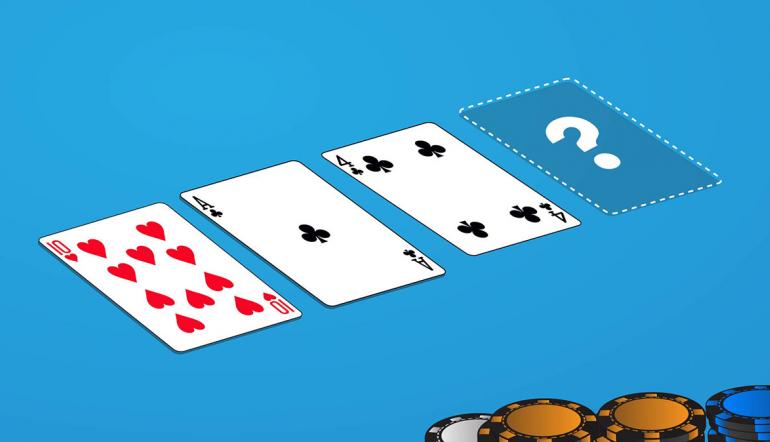 The “flop” in No Limit Hold’em refers to the three community cards that are dealt after the initial round of betting (preflop). Key decisions need to be made on the flop which will influence how the rest of the hand plays out. Playing well on the flop can, therefore, have an extremely positive effect on our winrate.

In line with that, this article is dedicated to helping us make better decisions on the flop. We will be discussing our five top tips for playing the flop in No Limit Hold’em.

It’s incredible how many strategy resources give advice on when to continuation bet flops without considering position. It’s not surprising that so many players have the exact same cbetting strategy both in-position and out-of-position.

This fact should absolutely not be the case. While a decent player might cbet 65% of flops when in-position in a single-raised heads-up pot, they will usually look to cbet 35% of the time (or less) when out-of-position. It’s almost not worth comparing what our in-position and out-of-position flop strategies should look like – we should, for the most part, treat them as entirely separate aspects of the game.

As a very general guideline, being out-of-position on the flop is a significant disadvantage. We should compensate for this disadvantage by playing tighter and folding more frequently. A decent player will hence fold more often to continuation bets when out-of-position.

It’s a critical moment on the flop where we decide which of our holdings we intend to carry on over to the remaining streets. Where possible we want to select holdings that maximise our equity realisation while minimising our opponent’s. Therefore, we should mostly be interested in the characteristics of our hole cards rather than their raw-equity.

As an example of this, imagine the following flop situation -

Now, it doesn’t matter too much about the situation, we could be considering a cbet, considering floating, or even donk-betting. Which of these hands should we prefer on the flop in a single-raised pot with normal stack-sizes? Well, naturally, that depends on our criteria. Regarding raw-equity, the A6o nearly always does better than a Nine-high type holding. However, most of us would probably agree that it is more favourable to hold the 9c8c.

Why so? It has a better shot at being able to –

The 98s is overall much more playable and profitable. One reason for the increased playability is that we often know exactly where we stand. If we make our straight or flush, we can play for stacks, whereas if we miss we can feel confident that our hand is definitely not best. We can proceed to either fold or bluff, whichever is most appropriate. A6o often leaves us in that murky middle ground where our holding may or may not be good. The best play often becomes obscured.

One exception to preferring the 98s in the above example might be that we are playing with shallow stacks. The shallower our stack, the more we care about raw-equity. In such situations, it could potentially be more favourable to hold the A6 as opposed to the 98. We don’t need to worry about the problematic later-street decisions that the A6o brings since we don’t have enough chips to play those streets anyway.

Deeper stacks, on the other hand, cause us to favour the good backdoor equity holdings like the 98s even further. Not only do we still have great improvement potential, but the extra stack depth results in increased implied odds if we were to make a strong 5-card holding by the river.

It’s also possible to bluff more aggressively when stacks are deep, due to our ability to apply increased pressure on later streets. With especially deep stacks we can even entertain the possibility of overbetting on later streets. Our opponent actually has to fold the flop more frequently to compensate for this possibility (a concept known as “leverage”).

Even if we consider ourselves well versed in standard flop lines, this is absolutely not the most important consideration. Any information we have on our opponent takes precedence over our default flop strategy. For example, perhaps we normally don’t cbet a certain holding on the flop, but then notice that our opponent is folding over 60% of the time to flop cbets. The best play will likely be to cbet.

A consideration of our opponent’s stats and tendencies can also help us identify opportunities to make use of unorthodox lines such as donk-betting. Perhaps we always check to the PFR as the preflop cold-caller (which is fine), but we might notice that a particular opponent is folding 60% of the time to donk-bets.

Rather than rigidly stick to our default strategy, we should be comfortable making deviations based on a specific read.

Even holding the same hand on the exact same flop texture, we will frequently find ourselves making different decisions. Why? Because our decision depends not just on our hand, but also on our opponent’s range. We need to think carefully about the types of poker hands within his range if we wish to make the best decision on the flop consistently.

How do we know Villain’s range?

We’ll begin to formulate assumptions after considering his preflop action.

Hero open-raises on the BTN to 3bb. SB folds. Villain cold-calls in the BB.

How many combinations of strong value-hands (TPTK or better) does villain have in his range?

If we look at the board without considering the preflop action, there are a number of hands which Villain could hold. 12 combos of AK, 6 combos of Aces, 3 of KK, 3 of JJ etc., etc. But, when we consider that Villain just called preflop instead of 3bet, this actually changes things somewhat dramatically.

It’s highly likely that our opponent would have 3bet preflop if he held, AA, AK, KK or JJ. We can safely assume he doesn’t hold any of these hands. So, which strong hands does he have on this flop that may have cold-called from the BB against a BTN 3bb open? Perhaps, KJ, and 22, that’s it. So, the answer to the question is 12 combinations. That’s 9 combinations of KJ and 3 combinations of 22.

Of course, the above are simply general guidelines for playing the flop. To become a master of flop play, we need to break things down by every possible flop situation and run a specific analysis. The more variables we include, the longer it will take, but the sharper our flop play will become.

However, the above tips have been carefully chosen to help highlight some of the most common flop leaks and should provide an excellent starting point.

Intermediate
Advanced
Texas Holdem
About the Author
By
Timothy Allin