What is Domination in Poker?

Domination means that a hand or range is weaker than another hand or range. The term dominated also refers specially to types of hands that are likely to suffer from domination issues. In Hold’em this includes hands like top-pair weak kicker, baby flushes (especially on paired textures), and the low end of the straight (especially if the flush is possible or the board is paired). We have to be careful in these situations because it ends up being likely that “our opponent has us dominated”. 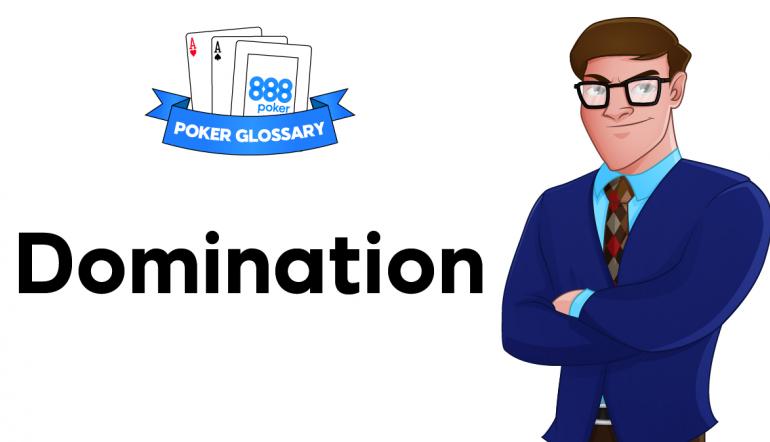 Imagine in hold’em we are considering calling a preflop 4bet with KQs. Our opponent’s range is QQ+/AK.

This is a situation where we can consider our hand highly dominated. Unless we get especially lucky, the strongest hand we are likely to flop is a one-pair hand, Queens or Kings. Any time we hit such a holding however, there is a high possibility that our opponent has a better pair, i.e has us dominated. If we flop a Queen he might hold KK or AA. If we flop a King he might hold KK or AK. This is not to say we are always behind, villain might occasionally hold QQ when we flop a King. But it should be clear that the potential for domination is high in this example.

The term reverse domination applies to scenarios where an otherwise inferior preflop holding makes the best hand by catching two pair. For example,

Hand 1 was clearly the best holding preflop, but the inferior AQ flopped two-pair to take the lead. We can say that the AK is “reverse dominated” in this example.

Other examples of heavily dominated hands include any type of weak draw. It might be a weak flush-draw, the low end of a straight draw, or any draw on a board texture which already contains a pair. (More information on this in the strategy application).

Example of Domination being used in a sentence -> (Hold’em) I was reluctant to call the preflop 4bet with KQo because it suffers from some domination issues.

How to Use Domination as Part of Your Poker Strategy

A big problem area for newer players is the overplaying of dominated draws, especially as a result of misapplication of pot-odds. Let’s see an example from No Limit Hold’em.

Let’s imagine that we are out of position on the turn facing a half pot bet from our opponent while we both have relatively deep stacks. Call or fold? Of course, the decision actually depends on a number of variables, and it’s important we take into account all of them.

We have 15 outs to make either a straight or a flush by the river meaning we’ll hit roughly 30% of the time. We only actually need to hit 25% of the time according to our pot odds. There is big problem here though: all of our outs are potentially dominated (also sometimes referred to as “tainted outs”). In fact, we might already be drawing dead to our opponent’s full house. Even if we make our draw by the river, we should be concerned about losing additional chips when our opponent value-bets a better hand i.e. reverse implied odds.

Despite getting the “correct price” after running a naïve pot-odds calculation, it should be clear that we need more than the required pot odds in order for calling to be connect. We need this better price to help compensate for our reverse implied odds on the river. Of course, whether the hand in the example should be folded depends on the exact details of the situation, but it’s definitely not a guaranteed call, and either way we should proceed with extreme caution.

Here is another example of a dominated draw.

While it’s true that we hold an open-ended straight draw, we should be careful about assuming that we have 8 clean outs on average. There is already a higher straight possible, meaning that we might already be drawing dead. If hit one of our outs, the Nine, then any Tx has us dominated for the higher straight.

Also note that some of our straight outs are clubs meaning that our opponent might make the flush at the same time as we make the straight. Even if our straight ends up being good on the turn, our opponent will often have redraw possibilities to make a flush or higher straight by the river.