What is Donk Bet in Poker?

The term donk applies both to a specific poker action and to a specific type of poker player. Donk betting means to make a bet out of position when not the last aggressor on the previous betting round. The term donk is also used to describe a very bad poker. Caution is advised since many may find the term offensive. However, for professional players the word donk has evolved into a standard technical term for describing a soft target at the table. 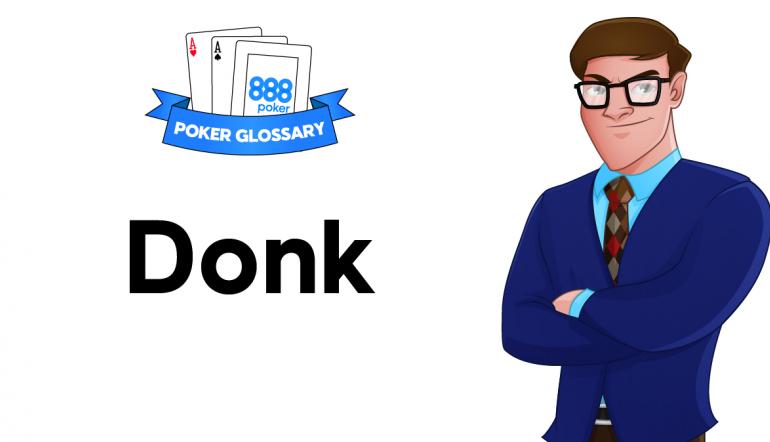 It’s unclear when poker players first began to use the term “donk” to describe a weaker player at the poker table. That said, the donkey has long been a symbol for stubbornness and ignorance, traits which are not useful for succeeding at poker.

Read this article about how to master ranging your opponent.

As such, professional players see the terms “fish” and “donk” as different. The word“fish” might simply refer to a weak regular, whereas the term “donk” applies to highly incompetent players who may not even have a full grasp of the rules, in some cases.

The term “donk-bet” carries an entirely different meaning, although it is related somewhat to the word donk. For a long time in poker history, good players would nearly always check to their opponent if he was the aggressor on the previous street. For example, after cold-calling an open raise while OOP preflop, a good player would always check the flop to see if his opponent would fire a continuation bet.

Of course, novice players didn’t necessarily know about this unwritten rule of “always checking to the aggressor”, and they would frequently bet into the aggressor while OOP. By playing this way, they would be automatically identifying themselves as inexperienced players (or “donks”). The term “donk-bet” was born - and the rest is history. Since then, it represents a line taken primarily by weaker players.

Donk bets can happen on the flop, turn or river. So long as our opponent took the last aggressive action on the previous street, then leading OOP on the next street is referred to as a donk bet. For example, a river donk-bet would typically involve a player cold-calling OOP against an open preflop, check/calling the flop and turn, then leading the river OOP.

Example of Donk used in a sentence -> We cold called in the big blind against a button open then decided to donk bet the flop.

How to Use Donk Bet as Part of Your Poker Strategy

Should We Ever Donk Bet?

Despite its name, donk-betting can actually be used as part of a correct poker strategy. If we never donk-bet, we are likely not following the best strategy. So, why historically did good players avoid donk-betting?

It’s worth remembering that this was also a poker era where the average player was severely over-using continuation bets, especially on the flop. Many players were c-betting in the region of 80% or more of flops. In terms of exploitative play, donk-betting doesn’t make too much sense when our opponent will always provide us with a cbet. Value hands nearly always make more money by going for the check-raise.

In the modern era players understand the theory behind c-betting a little better and tend towards c-betting at a lower frequency. On certain flop textures, where their c-betting frequency will be especially low, incorporating a donk-betting range is often made more profitable by the defender. Another way of thinking about this is that when flop, turn, or river cards fall which heavily favour the defender, it may make sense for him to lead OOP and take control of the action.

Donk-betting is also important for exploitative reasons. Some opponents simply play badly against donk-bets, either folding, calling or raising too frequently. Against high folders we would certainly want to start donk-betting as a bluff. Against players who raise donk-bets hyper-aggressively it makes sense to start leading our value holdings in the hope of getting that raise.

Donk-betting is often considered a complex area of poker strategy due to the necessity of balancing a range across multiple lines. (I.e we have the option to donk-bet, check/call, check/raise or check/fold and we need to distribute each holding within our range across the correct lines). The first step for beginners is simply to consider donk-betting as a possible option. Many players have a blind spot here and will never donk-bet, regardless if the situation calls for it.

What is the difference between a ‘donk’ and a ‘donk bet’ in poker?

Donk is a (potentially offensive) term used to describe a very bad poker player. A donk bet is a bet made out of position after check/calling on the previous street. The link here is that it’s usually ‘donks’ who donk bet hence the name behind the bet.

Do good poker players ever donk bet in poker?

Although most good players rarely donk bet it does have its place in poker. Solvers (tools which calculate theoretically optimal poker strategy) indicate that donk betting is actually a correct part of poker strategy (although it often happens at quite a low frequency).

What does it mean when my opponent donk bets the river in poker?

A river donk bet is usually a sign of weakness rather than strength, although it does depend on the type of opponent who is donk betting. If an unknown or weak player is donk betting the likelihood is that we are not up against an especially strong holding. However, when good players donk bet it’s important to give the line a lot more respect (especially on rivers where draws complete).

What is the difference between a ‘donk’ and a ‘fish’ in poker?

There is no official difference between the two terms and many players use them interchangeably. In most cases, players use the term ‘donk’ to describe a player who is much worse at poker than a typical ‘fish’. A ‘fish’ could just be a weak regular for example. Keep in mind that opinions differ on whether ‘donk’/’fish’ are technical poker terms or insults, so we should be careful about calling other poker players ‘donks’.

Is it ok to refer to other poker players as donks?

No poker player wants to be referred to as a ‘donk’ so it’s recommended to avoid doing so in their presence. The term ‘donk’ is more of a technical poker term than an insult in the modern era but we can’t expect the other poker players at the table to necessarily be aware of that. There is virtually no situation where the word ‘donk’ needs to be used while actually at the poker tables. Using the term when discussing poker strategy as part of your poker study group is fine though.