What is Freeroll in Poker?

Freeroll essentially refers to a situation where we can never lose, but we might win. The most common example is freeroll tournaments. We don’t need to invest any money to play, but there is the possibility of walking away with real cash prizes. The term freeroll is also used to describe situations where we have the same hand as our opponent but have an additional draw component. It’s common in games like Omaha that two players make the same nut straight. If one of the players has the flush draw to go with his straight we can say that he is freerolling his opponent. He can never lose but may occasionally catch his flush and win the entire pot. 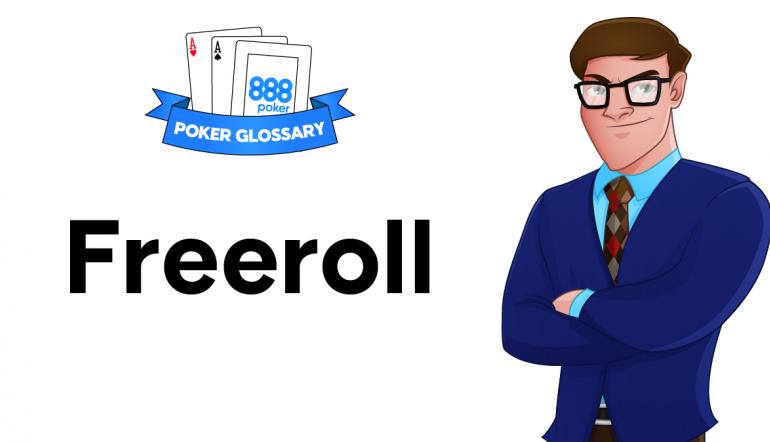 1. Many poker networks offer regular freerolls for their customers. It serves as a good incentive for new player sign-ups and also allows players to build a bankroll from scratch if they don’t wish to deposit their own funds.

2. Freerolling is especially common in Omaha variants (including Omaha high-low split). Holding the nuts in Omaha does not guarantee we have the best possible hand on the flop or turn, since our opponent may hold the same hand as us along with redraws.

How to Use Freeroll as Part of Your Poker Strategy

1. There is no real drawback to playing as many freerolls as possible aside from the time investment. Most professional players won’t play freerolls since the potential reward is often not compensated by the time invested. For hobbyists though, and for players starting with a $0 bankroll, freeroll tournaments are a fantastic resource.

2. Understanding freerolls is an integral part of Omaha variants of poker. Although freerolls are most commonly seen in this format, we’ll start with a Hold’em example since it will be more readily understood by a wider audience.

Both hand 1 and hand 2 hold the nut straight in this case. Despite holding the nuts, hand 2 has a mere 31.8% equity since hand 1 also has the flush-draw to go with it. Hand 1 can never lose this pot, but it may potentially win if it catches a flush. We can hence say that hand 1 is “freerolling” hand 2.

Although this type of situation is unfortunate in Hold’em, it is at the same time unremarkable. Unless the stacks are extremely deep, it’s rarely going to be correct for hand 2 to fold the nuts just on a hunch that he might be getting freerolled. In other words, hand 2 is simply getting unlucky, and there is not too much he can do about the situation.

Omaha is a completely different ball-game. Many Omaha players would even go so far as to say that a large part of the underlying mega-game in Omaha is to deliberately engineer situations where there is a high possibility of freerolling our opponents.

This Omaha example is similar to the Hold’em example but there is a big difference. Hand 2 while holding just the bare nuts, should be concerned and alert about the possibility of getting freerolled. It’s not necessarily a cooler to get the stacks in this dominated, especially as the stacks get deeper.

Note that not only does hand 1 have the redraw to the club flush, but it also has full-house redraws. Any King or Jack on the turn and river improve hand 1 to the best.

As a final pointer, note that hand 2 technically has some redraws that hand 2 doesn’t have. It’s possible in this example that hand 2 could win outright if it were to catch the runner runner spade flush. Both hands are hence freerolling each other to some extent, but since hand 1’s redraws are stronger overall, we describe this situation has hand 2 getting freerolled.

Similar concepts can be observed in the split pot version of Omaha. It’s possible for two players to be chopping for the high hand while one has a live low draw. The player with the low draw is guaranteed to chop  but may sometimes “quarter” his opponent (winning one pot but chopping for the other) when he catches his low.