What is Pocket Pair in Poker?

A pocket pair is a pair made purely by using hole-cards. The most common application is to Hold’em games, where we get dealt a pair on the preflop betting round. However, the terminology occasionally extends to other variants such as Omaha. For example, if we get dealt QQT7 we can say that we have a pocket pair, Queens (called pocket Queens for short). A pocket pair in Stud games is more typically referred to as a wiredpair. 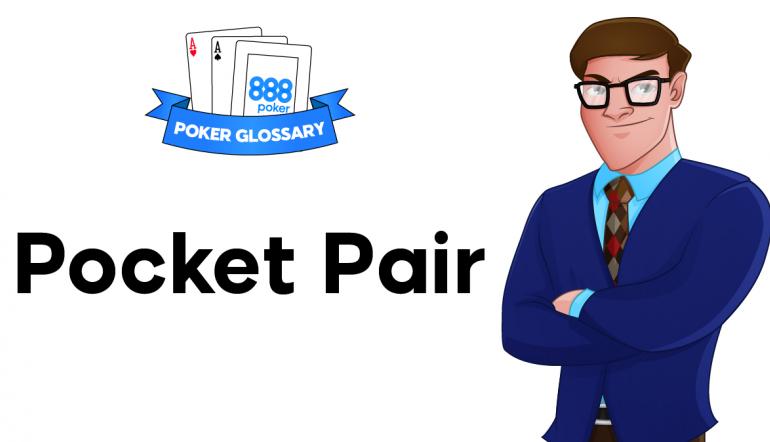 The term “pocket” alludes to the fact that a card belongs exclusively to the player holding them. I.e, none of his opponents are allowed to see them, so they may as well be in his pocket.

Naturally in Omaha it is possible to have “double-paired” hands which essentially means we are holding two pocket pairs at the same time.

Pocket pairs also exist in Stud although they are typically referred to as either “wired” or “split” pairs depending on whether the pair is concealed (both cards in the hole – “wired pair”) or one of the pair cards is a visible up-card (“split pair”).

Example of Pocket Pair used in a sentence -> Pocket pairs are good hands in Hold’em because they give us the opportunity to flop a set.

How to Use Pocket Pair as Part of Your Poker Strategy

Pocket pairs are excellent starting hands in Hold’em due to their ability to flop a set (three of a kind). Sets are considered extremely strong hands in No Limit Hold’em and are frequently strong enough to play for stacks with (depending on the exact board texture and stack depth).

Pocket pairs are also good hands in Omaha but less so due to the fact we get dealt four cards preflop. Not only are pocket pairs significantly more common in Omaha variants but they are also more susceptible to being outdrawn postflop or finding themselves in set-over-set confrontations. Baby (low) pocket pairs are generally considered to be “danger” hands in Omaha since the possibility of being dominated after flopping a set is high. In many Omaha games it might be a mistake to stack off with bottom set unless we also have redraws (again depends on exact stack depth and board texture).

A big wired pair in Stud is considered very strong, partly due to the fact that it is disguised. Split pairs on the other hand telegraph the potential hand strength, since it is always possible that a big up-card might be paired with another card in the hole.