How to Perfectly Defend vs 3bets

Knowing 3bet defence strategy theory can go a long way towards boosting our confidence when facing them. Let’s consider the basic principles for defending. 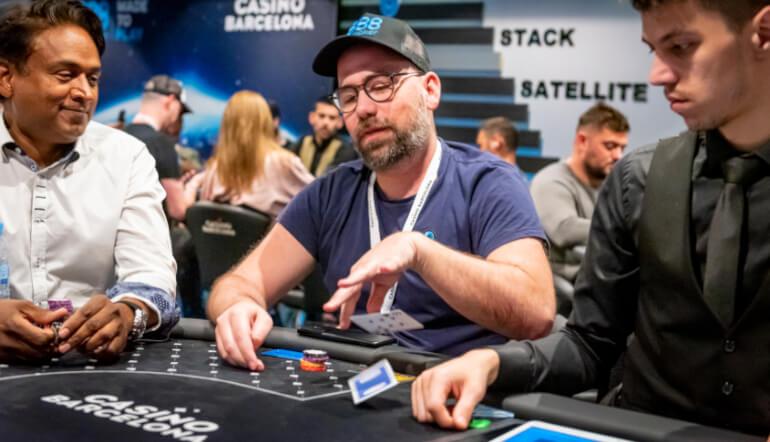 Have you ever felt uncomfortable when the players to our left are constantly 3betting? Should we play back and make a stand? When is the right moment?

Calling more against 3bets can sometimes worsen the situation if we are unsure how to proceed postflop.

So, what’s the solution? Knowing some of the theory can go a long way towards boosting our confidence when facing 3bets.

Let’s consider some basic principles for defending against 3bets.

Basic Principles for Defending vs 3bets

Now, this is not always true. It does depend on the size of the 3bet. We should be folding less than 50% in some scenarios. In others, we should fold more than 60% of the time.

The key takeaway here is that, in most cases, we should fold the majority of the time when facing a 3bet. This strategy takes quite a bit of the pressure off.

We might intuitively feel we are giving our opponent too much of an advantage if we fold over 50% of the time vs 3bets. This scenario is not true.

We are supposed to fold most of the time, especially if we are facing large 3bets.

Against smaller 3bets, we should fold less than 50% of the time. (Think 7bb 3bet or smaller).

Here is that information in table format -

Large 3bets are becoming more common in the modern game partly due to the increasing popularity of poker solvers. Facing large 3bets might feel problematic, but it doesn’t need to be.

In reality, we should fold a lot when facing large 3bets. Our opponent stands to lose more on those occasions where we show up with a premium and can play back.

#3 4bet a range of premium value hands and high-equity semi-bluffs.

A typical button 4bet range will include the following hands –

Sometimes poker players refer to this as a polarised range. But it’s not true polarisation in the same way that river betting ranges should be polarised.

The best 4bet semi-bluffs usually have at least one high card. So, premium holdings such as AA, KK and AK are less likely for our opponent due to card removal effects.

#4 Calling is less attractive when out of position.

Calling against a 3bet is less favourable when we are out of position.

While we still need a calling range, we should tend toward folding more often.

We should make a larger percentage of our defends a 4bet compared to our in-position strategy.

We’ll see an example of this when we look at sample defending ranges.

#5 We should defend tighter when our earlier position opens get 3bet.

Our opponents will be 3betting against our early-position opens with a stronger range. So, our continuing range needs to be stronger.

Although we defend a tighter range, we don’t necessarily need to fold more frequently. After all, we should be open-raising a tighter range from early positions.

So, we’ll be folding against 3bets with a similar frequency regardless of the position we open.

Let’s look at some sample defend vs 3bet ranges from different positions.

Our goal is to get a general feel for how defending ranges are constructed. It is not recommended to try and memorise specific hand combinations. We might face many possible preflop scenarios, all with slight differences.

In our first sample range, we are assuming a 2.5bb button open raise and an 11bb 3bet from the BB. 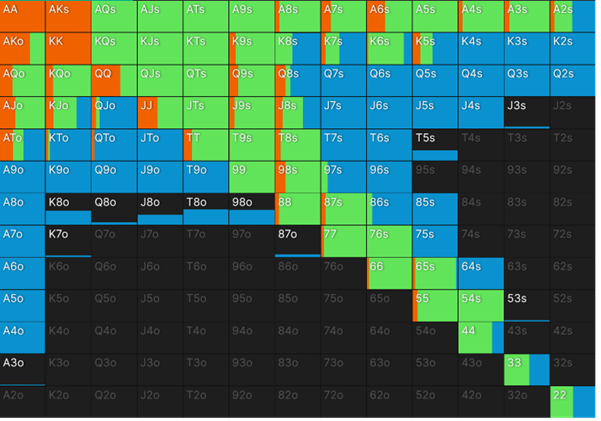 JJ+ and AK are strong enough to 4bet for value. But note that JJ, QQ and AKo are still flat calls with some frequency since we need some stronger holdings in the calling range.

We have a mixture of Axs, Kxs, Qxs and suited connectors/gappers in the 4bet range, which we’ll refer to as the semi-bluffs.

Note that none of the 4bet semi-bluffs are pure 4bets. Most are mixed into the 4bet range with relatively low frequency - either called or folded the rest of the time.

The EV (expected value) of the 4bet semi-bluffs is extremely close to zero. Their primary purpose is to balance out the range and prevent our opponent from making tight folds against our 4bet range.

These hands don’t make a profit and are not especially critical when facing weak opposition.

We are assuming a 3bb SB open and 9bb BB open in this second sample range.

We get a decent price on the call and should fold around 50% of the time when facing the 3bet. 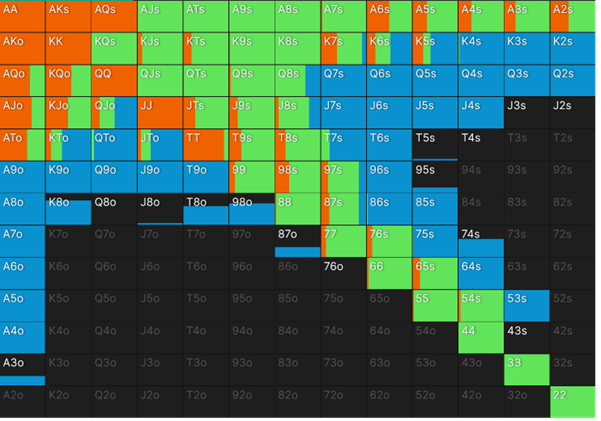 Flat calling is less attractive since we’ll be out of position.

Of all the hands that defend, 34% are 4bets. In our BTN vs BB scenario, only 23.6% of the continuing range were 4bets. Either way, flatting is still our main defensive option.

But close hands should be more likely to 4bet when out of position. A simple example is TT, which mostly flats BTN vs BB but mostly 4bets SB vs BB.

Aside from these slight differences, the overall approach to defending is similar. Axs, Kxs, and AJo/ATo are still our preferred choice of semi-bluff with some suited connectors in the mix.

We are assuming a 2.5bb UTG open raise followed by a 10bb BB 3bet in our third example. 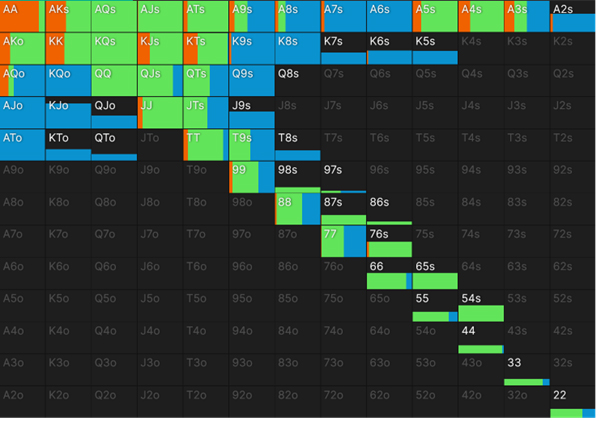 The defending range should also be quite tight since our opponent is 3betting a tighter range against UTG opens.

Our 4bet value range is KK and AA in this scenario. AKs/AKo have a low enough expected value that we should consider them as semi-bluffs rather than value hands.

Although ATs+/KTs+ and 22-TT are listed as defends, the expected value is very low. These hands are mostly played, so we don’t have an overly high folding frequency.

We see A3-A5s and KTs/KJs used as 4bet semi-bluffs. But we no longer see suited Qx or suited connectors (at least, not with any real frequency).

JJ+, AQs and AKo are the only hands that generate an EV larger than 1bb across the entire range, according to the solver.

We are assuming a 2.5bb UTG open and a 7.5bb BTN 3bet in our final range. The 3bet size may seem small. But it’s relatively typical for players to reduce the 3bet size when 3betting in position. 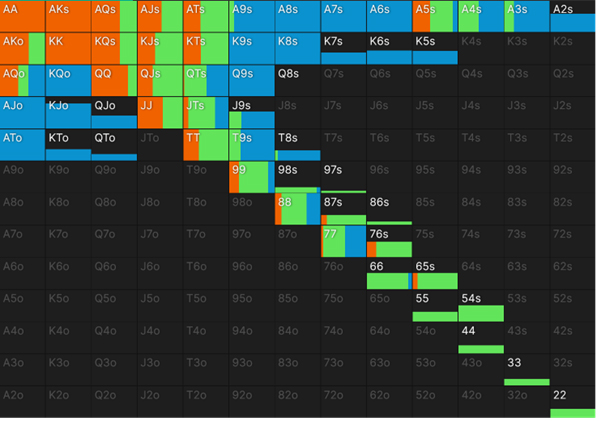 Our defending range is pretty similar to the previous. But we 4bet quite a bit more aggressively since we are out of position.

In this model we are 4betting almost 50% of the time when we defend. This strategy is the only significant difference with our 3bet defence.

Similar to UTG vs BB, the only hands that generate an EV larger than 1bb are JJ+, AQs and AKo.

Exploitative Considerations When Defending vs 3bets

The sample ranges are close to theoretically (GTO) correct. But they don’t represent the best strategy against all (or even most) opponents.

Pay attention to the following for exploitative opportunities:

#1 Our opponent is folding too much to 4bets

In theory, our opponent is supposed to fold less than 40% of the time in many spots when facing a 4bet. Assuming our opponent folds more often than this, the EV of our semi-bluff 4bets will increase.

We may profitably 4bet such hands every time we get 3bet rather than 4bet our semi-bluff holdings with a low frequency.

By the time our opponent is folding 60% of the time to a 4bet, we can 4bet bluff any 2 cards profitably, even if we always give up postflop when called.

#2 Our opponent is 3betting too tight

On average in poker, our opponent should be 3betting between 8% and 10% of the time.

Despite this, the average player doesn’t 3bet enough. An average preflop 3bet frequency is usually closer to 7%.

And, some extremely tight players, in most player pools, 3bet less than 6% of the time.

Defending as wide as our sample ranges will be a mistake against such opponents. The best exploitative response is to fold at a very high frequency when our opponent is mostly 3betting premiums  - unless we are dealt a premium hand.

#3 Our opponent is 3betting too aggressively. 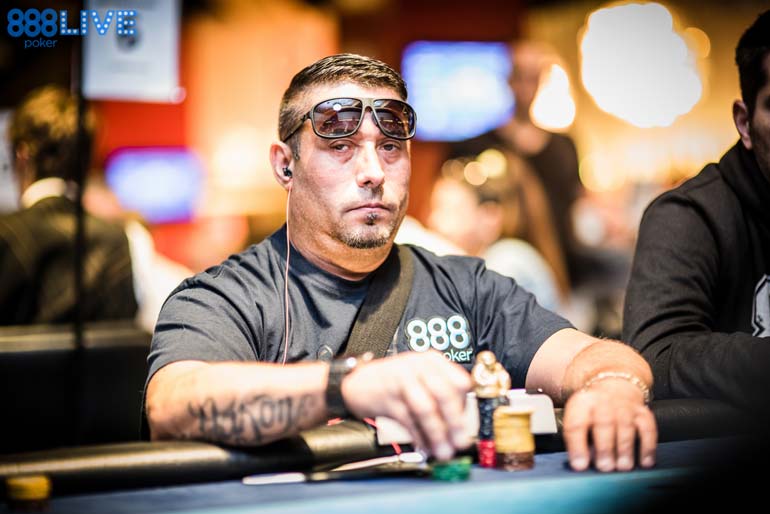 Overly-aggressive 3bettors is the most challenging scenario to deal with for many players.

The first adjustment is to open fairly tight ranges if there are aggressive 3betters behind us. This play will prevent us from folding too frequently against 3bets.

We can improve this strategy by checking whether our opponent is folding too much to 4bets. If so, we can start 4bet semi-bluffing very aggressively.

While some aggressive 3bettors will fold to 4bets, others continue with their wide range.

It depends on their playing style -

Many players find 3bet pots tricky because there are usually more chips at stake. They may panic or find that their mind freezes.

Keep in mind that our opponents may have the same issue in 3bet pots.

If we can stay calm and think through our decisions clearly, this mindset is often enough to generate an edge in 3bet pots.