Pai Gow Poker has grown in popularity. However, unlike most poker games, each player attempts to defeat a banker, instead of each other. 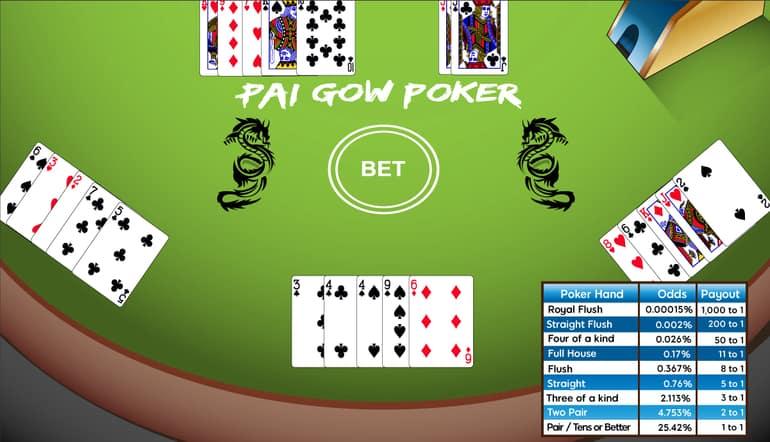 Today, the game is one of the most popular in the gaming industry. Unfortunately for MrTorosian, bad advice from a lawyer resulted in him launching without a patent.

That meant as the game spread, he was unable to capitalise and didn’t make a dime from introducing the game to the masses.

In this concise guide, you will find all you need to know about Pai Gow Poker, how it compares to other more traditional and popular poker games as well as the many variations of this unusual format.

How to Play Pai Gow Poker

Unlike most poker games, such as no-limit Hold’em, Pai Gow Poker isn’t played against other players, but instead, each player attempts to defeat a banker, most often played by the house dealer. One exception is if a player is allowed and opts to bet against other players, known as “banking.” Basically, that player becomes the banker and is up against the other players.

The game can host up to six players and is most commonly held in casino pits alongside games like Blackjack and three-card poker.

The object of the game is to beat the banker by forming two poker hands. After placing a bet, each player receives seven cards that a player splits into a five-card “high” hand (AKA bottom, big, behind, high, etc.) that will be placed in the back. A two-card “low” hand (AKA small, minor, low, in front, etc.) is placed out front or “up top.” The only requirement is that your high hand must beat your low hand.

One exception at a lot of venues is that they make the “wheel” (an A-2-3-4-5 straight) the second-high straight behind Broadway (a 10-J-Q-K-A straight). Be sure to ask whenever you sit down to play.

Setting Your Hand & How to Win

If perchance you’re either uncomfortable or unable to set your hand, simply ask the dealer for assistance. In most games, they are allowed to lend a hand (pun intended) setting your hand.

Once all hands are set, the dealer reveals the cards, arranged according to the predetermined “house way”. This procedure is explained in the next section.

At showdown there are three possibilities:

Note: In Pai Gow Poker, the tie goes to the dealer, so if you both have a low hand like QxJx, the banker wins.

Speaking of commission, the house takes a cut of a player’s winnings, which is usually five percent. Think of it as the rake you might see in a traditional poker game.

What is the House Way?

Dealers must set their hands according to the “house way,” which is a predetermined set of procedures that varies from venue to venue. Be sure to ascertain what the house way is whenever you sit down to play.

As an example, a casino may have a “house way” similar to what’s described below.

And so on. The gist of it is there’s a procedure on how dealers must set their hands and understanding that process can help determine your own strategy.

For the two-card up-top “low” hand, you can only make pairs or high cards. As such, pocket aces are the best hand. However, remember whatever you set up top must be beaten by the five-card hand in back.

So, for instance, if you do places aces up top you must be able to beat them with your “high” hand, otherwise you foul and either lose the hand by forfeit or have the hand automatically reset by the house (it varies by casino).

Remember the Joker – When it comes to the joker, it can only be used to complete either a flush or straight. If you can’t use it in such a fashion, then it must be used as an ace.

With the “set-it-and-forget-it” nature of the game, meaning once your hand is set all you can do is wait and see how things play out, the only skill comes in how you arrange your hands. You want to set it in such a way that you have a good chance beating the dealer in both hands.

Some players would be inclined to set it, so they have kings up top and aces in back – K♠K♣ / A♦A♠8♠4♠2♠ -- giving them a virtual lock up top and a decent chance down below.

However, other players might want to put the flush in the back too, pretty much, lock up that part and take their chances up top -- A♦K♣ / A♠K♠8♠4♠2♠. In this particular hand, ace-king up top is strong in itself, and combined with the flush down below likely gives you a better chance of winning both top and bottom. 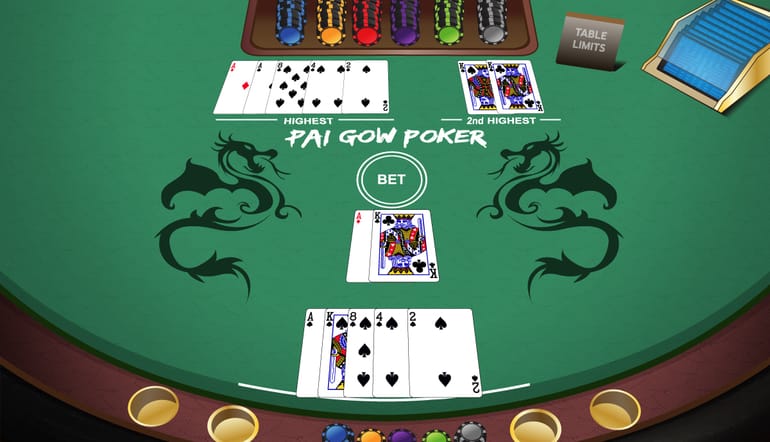 You can set your hand any way you want, provided the high hand always beats the low. That’s the only rule, so the rest is simply personal preference.

Here are some general Pai Gow Poker strategy tips to better your chances of winning both the high and low hands:

Pay close attention to all seven of your cards to determine how they best work together and can be most effectively split.

How to Deal Pai Gow Poker

First, thoroughly shuffle the deck of cards. Then deal out seven cards face-down to each player in the game. Prior to dealing, randomly select a seat to begin the deal and distribute cards counter-clockwise around the table.

If you’re playing at a full six-handed handed table, you will deal the players 42 cards and another seven to yourself for a total of 49 cards distributed. With the joker, there are 53 cards in play, meaning you should have four extra cards. These will remain unused and should be discarded in the muck.

Payouts in regular Pai Gow Poker hands are simple as you get paid 1:1 on your bet when you beat the dealer. However, players have the option to make a bonus wager, which is where they have the opportunity to hit a big hand. 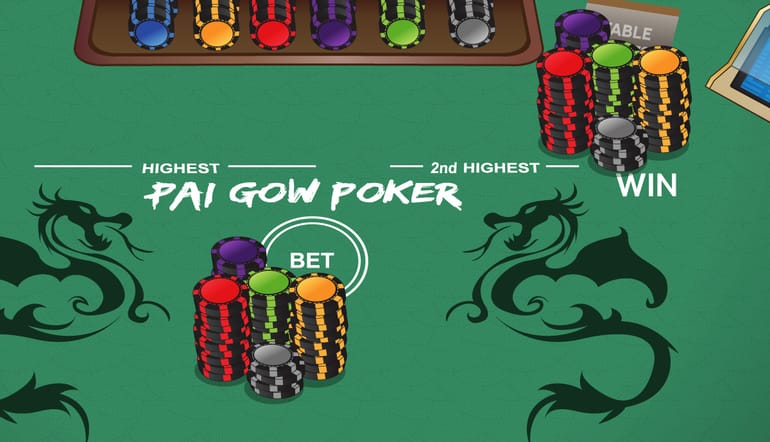 The payouts should be posted at the table and traditionally look something like this:

Like all casino games, the house has an edge. In Pai Gow Poker, the house edge is 2.84 percent, most of which comes due to the fact that players lose whenever there is a tie. The rest of the edge comes from the commission on winning hands.

Like most poker games, Pai Gow Poker has evolved to include several variants, most of which provide the opportunity to place side bets. For example, Fortune Pai Gow allows players the chance to place a side bet that they will make trips or better in their high hand. If they do, their bet is paid out according to the posted bonus payouts (i.e. you might get 25 to 1 if you make four of a kind).

Other popular variants include Pai Gow Mania, which allows for two side bets. Emperor’s Challenge offers players a side bet on making a Pai Gow “no hand,” which means you cannot make a straight or better using all seven of your cards.

There are also Progressive variants where players seek to make a straight flush using all seven cards to win a hefty jackpot.

Pai Gow Poker isn’t as complicated as it sounds. Once you try it out, you’ll find it’s quite easy and enjoyable. The good news is that you don’t even have to go to a casino to try Pai Gow as there are both free-to-play and real money options online.

There are also apps that you can download to play whenever you see fit. If you’re interested in playing Pai Gow Poker online, simply use Google to see what options are out there.

It may take a little time to absorb and understand the fundamentals of Pai Gow Poker, but once you have, it’s a fun and straightforward game. It doesn’t require deep strategic thinking but still proves challenging enough to keep you engaged and entertained.

Plus, given the frequent pushes (remember those happen when you win either the high or low hand, and the dealer wins the other), you tend to get more playing time than you might in other games like Blackjack.