How much should you buy in for in your cash games? Read on to get tips on the proper buy-in amounts for your table stakes. 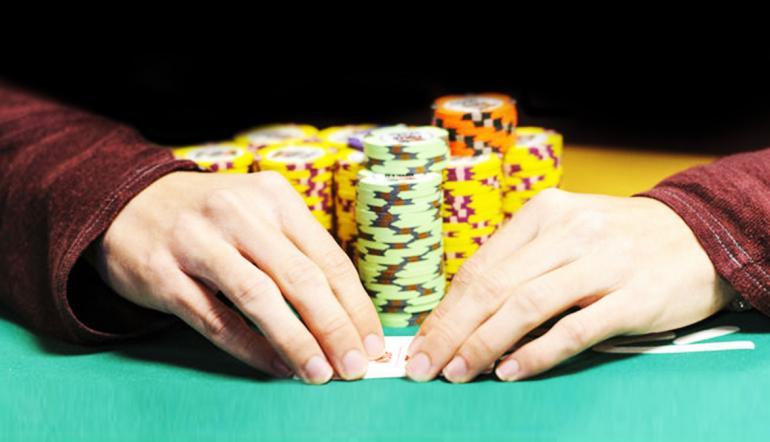 A poker buy-in refers to how much money you use to buy into a particular poker game.

There are usually specific rules put in place regarding poker buy-ins and how much money you’re allowed to put on the table and play with initially.

There are also additional considerations you should contemplate when deciding how much to play with to never go broke and also profit the most amount possible in a session.

In this article, we’ll be elaborating on these concepts and reveal everything you need to know about - the poker buy-in!

Limit vs No Limit vs Pot Limit

Buy-ins carry the most relevance in No Limit and Pot Limit games – where the size of the pot can exponentially increase in an instant and get massive sums of money into the middle by showdown.

Oppositely, in Limit games, buy-ins don’t have as much relevance because you’re limited to the amount of money you can bet during each round. (Many poker rooms have unlimited buy-in amounts for limit games because of this aspect.)

At most cardrooms (online and live), there are usually going to be caps in place dictating the minimum and maximum amount of chips that you can bring to a table when you first buy-in or rebuy. Typically, these will remain constant from stake to stake and be based on a certain number of big blinds.

Regarding maximum buy-ins, the majority of poker rooms (especially online) have a cap of 100 big blinds. In deepstack games, these maximum limits can increase to 250 big blinds or even more! Sometimes, there are no restrictions on the amount of money you can buy-in for. In these cases, it’s extra important to follow the recommendations on buy-in amounts that will be outlined in the next section. 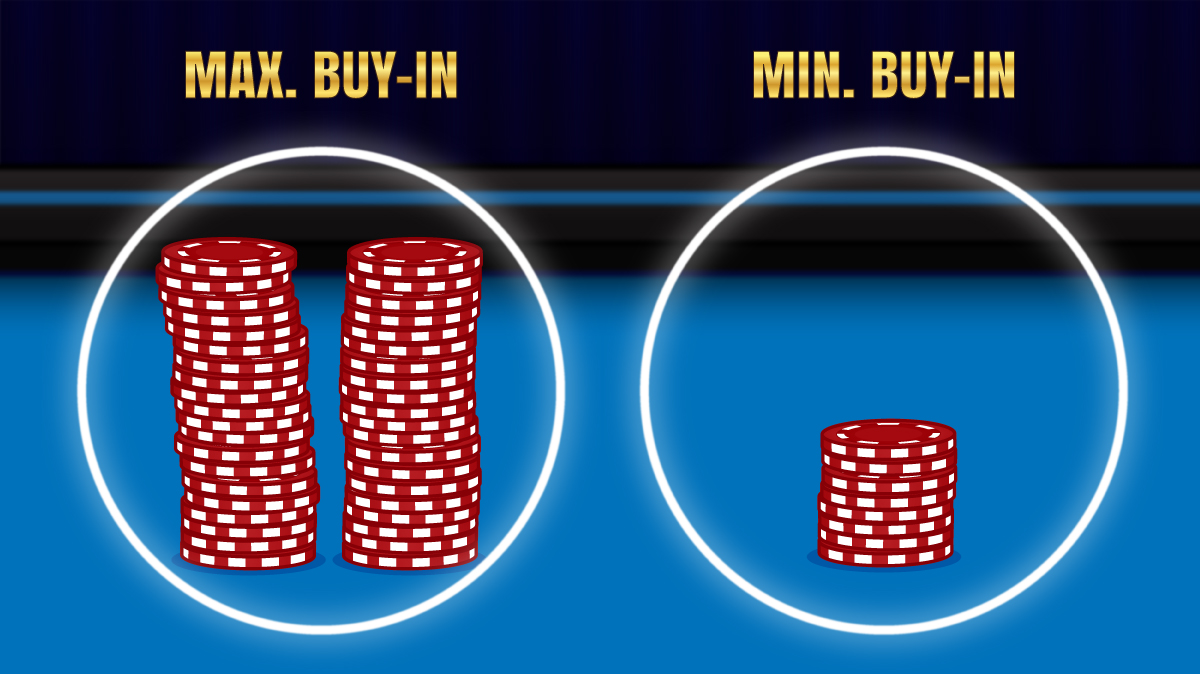 Outlined somewhat by the minimum and maximum descriptions in the last section, you will often have a choice of buying-in as a shortstack (usually <50bb) or deepstack (equal to or >100bb).

Playing as a shortstack, your implied odds will go significantly down post-flop, as there won’t be as much money for you to win whenever you get all your money in. As a shortstack, volatility can also be higher in your games because you’ll frequently be getting your money in before the last community card is dealt (meaning your short-term results can be very skewed when related to the actual equity you had in the hand when you got your money in).

Playing in a deeper stacked game, post-flop gameplay and skills will become much more evident. The potential to win bigger pots becomes greater, but so does the possibility of losing more money. However, the variance will usually be lower as more post-flop gameplay is evident.

3 DECIDING FACTORS: HOW MUCH SHOULD YOU BUY-IN FOR?

As a starting point, you should never be playing with more money than you (1) can afford to lose, or (2) would feel comfortable with losing. For example, if you’re playing with money for next month’s rent, perhaps it’d be better to drop down to significantly lower stakes. In another instance, if you know you won’t be able to get any sleep for a few nights if you lose $500 in one hand, choosing a smaller stake than a $500 buy-in might be a better alternative.

Remember that any money that you have on the table in front of you is always in play and can quite quickly end up in the middle of the pot during a hand. For this reason, it’s usually a good idea to have a dedicated poker bankroll (outlined in the next section) to help you avoid ever going broke and also help you choose a stake suitable to your comfort and/or skill level.

Regarding your comfort zone, you also should assess what your forte is in poker. If you’re a better tournament player and are playing a cash game, perhaps you should buy-in as a shorter stack. That’s where you’ll feel comfortable playing and likely profit from the most because, in tournament play, you’re often playing with a short stack.

Similarly, if you’re a cash game player who normally buys-in for 100bb and are playing a deepstack game, don’t feel auto-inclined to buy-in for the max. If you know you profit more playing 100bb poker than 200bb poker, play in your comfort zone and aim to profit the most this way.

Even the best players are going to have losing stretches. In poker, it’s the long-term outcome that you should be focused on. That said, though, you are going to have to accept many ups and downs along the way.

Because of this, it is recommended to have a dedicated poker bankroll to quantify which stakes you can afford to play, as well as when you should move up or down the stake ladder. If you’re starting out at the micro stakes online, you can see in the chart below that all it takes is just a $40 initial investment to start your poker journey with an initial bankroll for 2NL.

NOTE: In the case of games that have a deeper or unlimited maximum buy-in, you should have even more buy-ins in your bankroll before being able to affordably play in that game, simply to accommodate for the possibilities of large-sized swings and variance.

After choosing which stake and game to play at, arguably the most significant point you should consider for buy-in amount is your skill level relative to that of the other players at your game.

If you think your skill surpasses the rest of the players, you should buy-in for the most amount of money, just because you’ll be maximising your profits this way in the long run versus the losing or worse players. As an example, you may notice that many sharks buy-in for the usual maximum of 100 big blinds online to at least try to cover all the other players in the game.

Conversely, if you think you might be one of the weaker players at the table, perhaps buying in as a shortstack would be more acceptable.

Remember that you can always buy-in short to get a feel for your table first, and then top-up to the maximum if you feel it’s necessary.

If you are at a table full of deepstack regs and one shortstack fish (who you know is worse than you), don’t feel inclined to buy-in for the max. However, always have at least enough on the table to cover however much the fish has.

OTHER CONSIDERATIONS REGARDING POKER BUY-INS

Depending on the rules put in place by the cardroom, you may need to make your initial buy-in from the cashier rather than at the poker table. Sometimes, though, you can sit down and have a chip runner run up to the cashier for your initial buy-in or buy-in directly from the dealer. Just be aware of where you need to go and what you need to do whenever you’re buying-in for the first time as well as for when you’re topping up (if applicable).

“Going south” is where you take chips off the table and pocket them, so as not to risk losing them in future poker hands. This move is highly frowned upon and disallowed in most cardrooms. Even online, if you leave with a certain stack and try returning to the same table later, most software will require you to either buy-in with the same amount you had before or wait a set length of time (i.e. 30 minutes) before you can rebuy for a “normal” amount (anywhere between the minimum and maximum).

You’re always allowed to top-up and add chips to your stack if you dip below the initial maximum buy-in. Just ensure that this is done whenever you’re not involved in a poker hand (you cannot add onto your stack mid-hand) – only either before or after a hand.

Sometimes the dealers can process the rebuys for you and give you chips on the spot. Other times, there may be chip runners who can help you handle those rebuys at the cashier. An alternative option is keeping a few chips of bigger denomination with you after you buy in to make your re-buys easier and more seamless.

Always take the rake into consideration to when deciding whether or not to buy-in short or deep. At many live cardrooms (and even some online), it’s virtually impossible to play profitably as a short stack because the rake eats into your winnings so much whenever you win a pot. Imagine a high rake of 10% up to $8 at 200NL. If you have a $40 stack and double-up, you’re only going to be left with a stack of $72 after the rake. That eats up 20% of your profits in just one hand! Compare that to if you had a maximum buy-in of $200 and doubled-up. Now you’ll have $392, still leaving with you with a healthy enough profit to be able to stay in the green long-term and “beat the rake.”

When determining your seat selection, and figuring out who the good unknown players might be (and also some weaker fish), making a few initial judgements based on stack sizes can be beneficial. If you see shortstacks, it’s usually indicative of fish (because most good players would want to maximise their profits versus fish/weaker players and, therefore, would buy-in deepstack, or at least for the maximum possible buy-in. If you see any players with stacks that are double the size (or more) of the maximum buy-in, it’s quite likely that this may be a good player (or on less frequent occasions, a bad player who might’ve just gotten lucky in a previous hand).

In tournaments, buy-ins usually have two numbers associated with them -

For example, a $22 online tournament will likely have a buy-in structure of $20+$2, meaning $20 of a player’s buy-in will be contributed toward the main prize pool, and $2 will be paid in rake (tournament fees to the cardroom).

Hopefully, this article has given you a thorough and in-depth understanding behind poker buy-ins – what it means, how much is right for you, and what considerations you should make and ultimately consider before putting your money on the table.

See our story which explains poker buy in.