Having position on your opponents is absolute in poker. Find out why this poker saying is so important by using our Poker Position Charts. 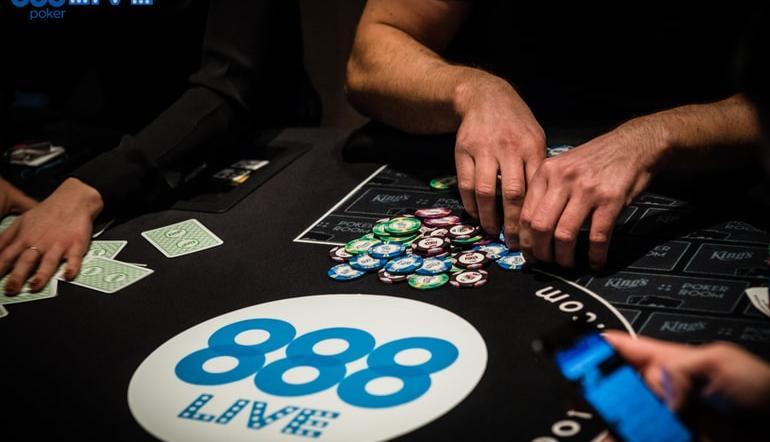 In poker, position is power! This means that you act after your opponents on each post-flop betting round.

There are a several of reasons why position is so important:

A typical full-ring game of poker consists of either 9 or 10 players. (In many cases, it may be 9 players to a table for cash games and 10 players for tournaments.)  The names that player positions are given signify where they are located in a hand, relative to the button and blinds.

Based on a player’s table position during a hand, they should continuously be cycling through different strategies to use in an attempt to try and effectively win the most money possible in any given situation.

The “dealer button” is given to one player to keep throughout a hand. From here, the two players to the left place forward the small blind and big blind – two forced bets that they must make before they are dealt any cards. (Don’t worry – from hand to hand, all players eventually take their turn having to place these forced bets, as the “button” moves clockwise one spot at the culmination of each hand.)

The purpose of these forced bets (the “blinds”) before any of the cards are dealt, is to put money into the middle of the table before a hand starts. This money in the pot gives players an incentive to play a hand and try to win that “dead” money.

What the Different Player Positions in Poker? 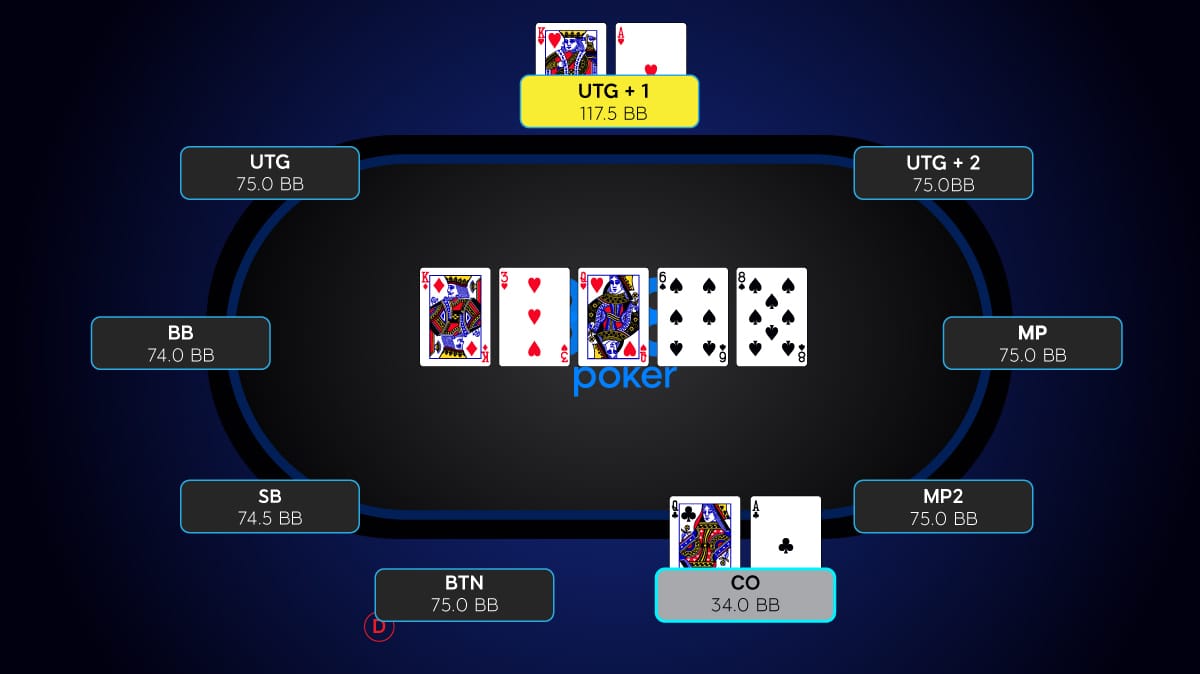 We’ll restrict the positions in this section to a 10-handed table so that you can get a complete view of all the positions at a poker table.

The player to the left of the big blind is always considered as the under-the-gun player (or “UTG”, as you can see is its abbreviation in the chart below). This information is correct, whether there are 6, 9, or 10 players to the table.

After the Early Positions comes the Middle Positions. First up is MP1. The next player who is 3 spots to the right of the player button is the Lojack (or MP2). In 6-max play (commonly found online), the player in the Lojack is synonymous with being “Under the Gun”, as the big blind is positioned directly to their right. The Lojack is a position that also signifies being in “middle-position” at a full-ring poker table.

From there, the player to the Lojack’s left is nicknamed the Hijack (HJ or MP3), which is also a part of middle position.

The final two players left to act before the blinds are considered to be in “late position”. First, is the Cutoff (CO) and last is the Button (BTN/BU) or dealer.  Players will generally have their highest win rates from these late positions simply because of the positional advantage at each point in a hand. They’ll always be able to act after their opponents on each post-flop betting round (and can manipulate action accordingly).

The final two players that have not yet been covered are the blinds – the small blind and big blind. The monetary amounts of the blind bets these players must put forward before any cards are dealt help signify which stake is being played.

NOTE: To illustrate this, in most casinos, the cheapest game that you’ll find is with blinds of $1 and $2. This setup is more commonly referred to as 1/2 (pronounced one-two), or 200NL (as players normally will buy-in with 100 big blinds in their stacks). It should be mentioned that despite this “200NL” being another appropriate name for any given stake, players aren’t usually required to buy-in for this maximum. Generally, initial buy-ins of 20bb to 25bb are accepted in most cardrooms.

Even the best players in the world are prone to losing money in the blinds over the long run. Having to place forward these forced bets before a hand begins and acting first (with the least information) on each post-flop betting round is the main reason why.

The measure of the greatest players, though, is determined by how much they can lessen their loss rates in the blinds. (For example, if you can have a win rate of -30bb/100 hands in the BB, this is quite an accomplishment. If you simply folded your hand every time, you’d be losing at a rate of -100bb/100 hands.)

Abbreviations for Player Positions at a Poker Table

As mentioned above, the different positions at a poker table carry corresponding titles to them, which are often abbreviated.

The chart below shows both the full position name and the abbreviation for both 10-max (full-ring) and 6-max (shorthanded) gameplay. 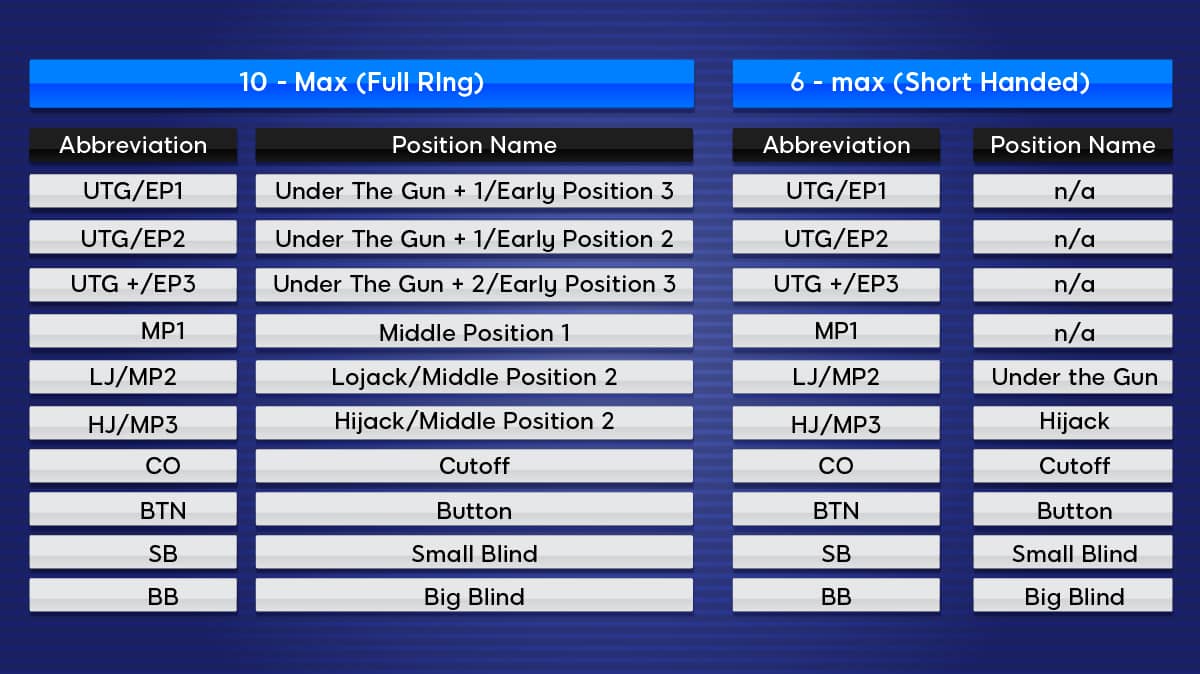 Understanding the importance of position at the poker table is a fundamental essential of becoming a winning poker player. Being able to read strategy articles and talk to other players about hand histories using player positions and abbreviations is going to be an essential part of the learning process.

If you ever feel overwhelmed with new poker terminology, don’t be alarmed – it all gets easier with practice and repetition. The more you expose yourself to articles like this and surround yourself with the fancy lingo of poker, the faster and more naturally it will sink in.