You raise the flop in position, hoping to take down the pot. But your opponent calls. We break down the optimal strategy based on hand strength/category. 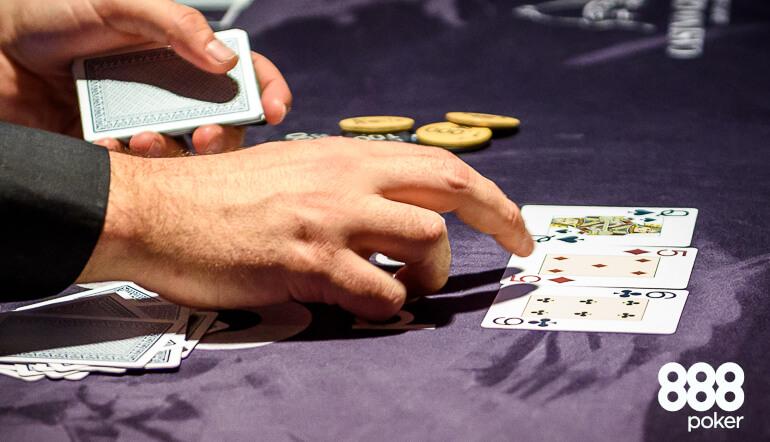 So, we’ve raised the flop while in position, perhaps hoping to take down the pot. But our opponent has called. What now?

Let’s break our strategy down into the following hand categories -

In each case, we’ll outline a recommended strategy and also compare it to what a poker solver shows as the correct approach.

Afterwards, we’ll consider some examples of hands on a specific board.

Recommended Strategy –
Check back but bluff the river if our opponent checks to us.

In most cases, we should check back if we find ourselves holding a trash hand on the turn after our flop raise gets called. We aren’t entirely giving up, however.

If our opponent checks to us on the river, we can fire our trash hands as a bluff. Many opponents fold too frequently against this line. 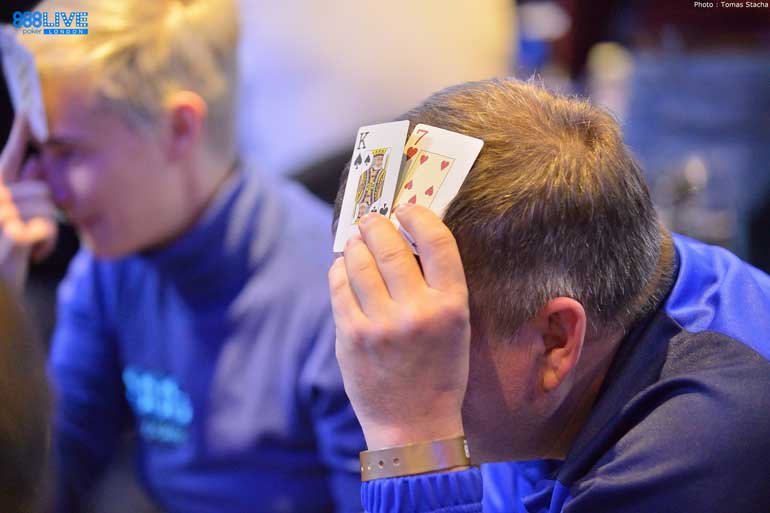 Checking back trash is usually the best option in practice. But it’s not technically correct to always play this way in theory. According to poker solvers, we should be firing a few somewhat speculative hands on the turn.

A poker solver says we should sometimes fire QsJs on a 3h turn after raising a 9d7d2c flop. The solver even uses an overbet (larger than pot) sizing at a high frequency.

So, should we try and play like the solver?

The problem is that the solver strategy includes unrealistic assumptions about our opponent. The solver acknowledges that firing trash doesn’t make more money than checking back. (It’s roughly the same).

So, why does the solver bet trash, in that case? It does so purely to keep its strategy balanced.

Having a balanced poker strategy is not essential against most opponents.

Besides, there are two other critical problems with firing trash-type hands.

1) If our opponent is folding less than the solver assumes, firing trash on the turn will be directly losing money.

2) Even if bluffing has similar results to checking, bluffing unnecessarily increases the size of our swings.

Recommended Strategy –
Fire strong draws but check back with dominated ones. If our draw misses, we can bluff the river regardless of whether we bet or checked the turn.

If we are drawing to the nuts, there is often an argument for building the pot. Assuming we hit our nut draw, the objective should be to get our entire stack into the pot. This feat is much easier if we continue building the pot on the turn.

Say, on the other hand, if our draw is likely dominated when it hits (for example, we hold the low end of a gutshot.) It’s a good idea to keep the pot small by checking. If we hit our dominated draw, we can comfortably call a river bet from our opponent since we have kept the pot small.

Assuming our draw misses (regardless of strength), we can think about bluffing the river. This strategy applies irrespective of whether we bet the turn or check back. A river bluff will be profitable in both scenarios against most opponents.

We can simply fold if our opponent bets the river out of position after our draw misses.

This method for playing draws often ends up being the best approach in practice. But there are more theoretically correct ways of playing draws, according to a poker solver.

It’s good to be aware of the theory. But we can typically generate a higher winrate by firing all the stronger draws and checking the weaker ones. Hand 5s8s could easily be second best when it makes the straight.

We could also use the same logic to not raise the flop with dominated draws in the first place.

The solver, however, mixes weak draws into the flop-raising range.

Recommended Strategy - Fire medium-strength hands if they are vulnerable to being outdrawn but check back if they are not. Our objective is to reach showdown as cheaply as possible.

A medium-strength hand, in this context, is any pair weaker than top-pair-weak-kicker.

Some pairs are more likely to get outdrawn than others, going from turn to river. We should look to protect the most vulnerable pairs by betting the turn and preventing our opponent from seeing a free river card.

Non-Vulnerable Pair - A non-vulnerable pair is any pair below top pair ranked ten or higher. It is also any pair that has a flush draw or straight draw to go with it.

Vulnerable Pair - A vulnerable pair is any pair that doesn’t have redraws to a straight or flush unless it is specifically a pair below top pair ranked ten or higher. Firing all vulnerable pairs has excellent results in practice. But a poker solver is interested in firing only a few mid-strength pairs (although it does fire some of them).

A solver tends to fire top pair hands and better, along with a selection of bluffs and semi-bluffs.

The solver tends to choose the pairs with an accompanying flush draw or straight draw In situations where it fires mid-strength pairs.

For example, the solver will fire 5d2d on the 9d7d2c3h board with reasonably high frequency. With the strategies recommended above, we might instead choose to always check back this combo for the following reasons -

We should bet immediately for value with our strongest holdings. We should also use large bet sizings.

Against most opponents, the objective goes beyond having a balanced strategy. We need to get the largest payout with our strong poker hands on average.

With our strongest holdings, we should typically consider 75% as the minimum bet sizing. But we can consider overbets (bets larger than the size of the pot) with very strong holdings. 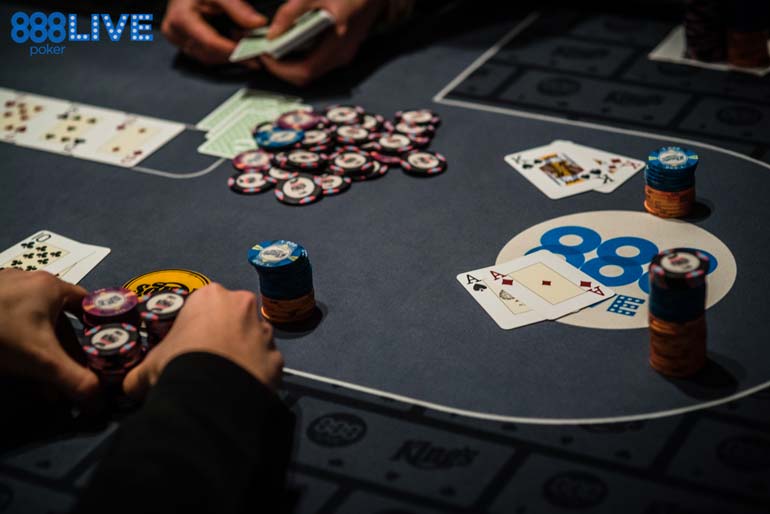 The solver mostly agrees that we should bet value hands on the turn with a high frequency after raising the flop. But the solver is also forced to do the following -

Our game plan is technically exploitable, assuming we don’t do these things. But our opponent has to be extremely good to exploit these types of mistakes.

Furthermore, assuming our opponent is not capable of adjusting, we make more money by choosing the larger bet sizing every time.

It’s valuable to understand how the theory works just in case we encounter a strong opponent. But, mainly, we’ll lower our winrate if we try to mirror what a poker solver does too closely.

Let’s now see the application of the strategy we have discussed in a specific situation.

Which of the following hands should barrel on a 4h turn after raising the flop IP? 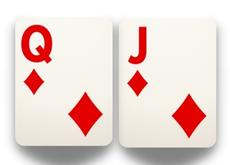 QdJd - This hand is a great example to continue firing on the turn since it can make the nut straight on the river. It’s not perfect, as our straight can be dominated on any spade or heart river.

But our draw is still strong enough, so building the pot makes sense.

Solver - The solver mainly checks back this hand. But it’s worth noting that the solver is rarely in this situation. The solver either 3bets this hand preflop or smooth calls against the flop c-bet. 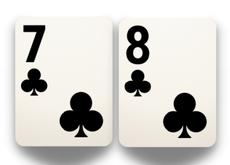 7c8c – Our straight draw is partially dominated with this hand. In this instance, we should endeavour to check back and keep the pot small.

We can also use the same reasoning to avoid raising the flop in the first place.

Solver - The solver mixes this hand between betting and checking. The solver needs some weaker/dominated draws in its betting range so that the range does not become overly strong (and unbalanced).

It wouldn’t be a huge problem to play like the solver here since 7c8c can still make the nut straight on a 6d or 6c river. 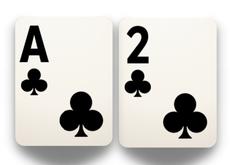 Ac2c - While we technically hold a gutshot, this hand should likely be classified as trash. The recommended option is to check back and bluff the river if checked to us.

We shouldn’t generally be raising this hand on the flop since it doesn’t have much potential.

We will only ever choose to raise this hand on the flop if our opponent has a history of over-folding.

As a rough guide (depending on the raise sizing), if our opponent is folding more than 55% of the time to a flop raise, we can start raising trash hands as a bluff.

Solver - The solver gives no advice for playing this hand since it never raises the flop with this hand. The solver directly folds this hand 100% of the time, facing the 75% pot continuation bet on the flop. 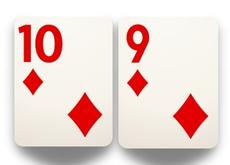 Td9d - Two pair is strong enough that we should be comfortable playing for stacks We recommend making a reasonably large turn bet 100% of the time, intending to shove all-in on the river for value.

Solver - The solver bets this hand for a large sizing quite frequently. But it also bets for a small sizing some of the time and checks back fairly frequently.

We understand that the solver needs to make sure it has some stronger holdings after it either checks back or bets small. But it’s unlikely that this approach is the best against most opponents.

We simply run the risk of missing too much value with our strong made hand. 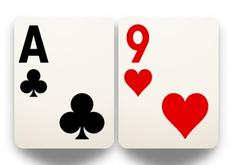 Ac9h - The recommended option is to bet our vulnerable second pair with 100% frequency. We are primarily betting to protect our holding. So, using a large sizing is not essential.

But betting a medium or small sizing relative to the pot will be fine.

Solver - The solver sometimes fires this hand but mainly checks back. A strong opponent can prevent us from being able to protect vulnerable made hands too aggressively.

But most opponents won’t know how to adjust correctly, which allows us to fire our vulnerable pairs 100% of the time. 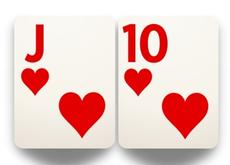 JhTh - This is an example of a non-vulnerable pair. It’s pretty unlikely to be outdrawn. Some of the river cards that would ordinarily be bad give us the flush here.

The recommended option is to check back. We can generally bluff-catch the river if our opponent bets.

Solver - The solver mainly checks back with this hand but does bet some of the time. Betting is not a bad play and will still be profitable. In practice, we might always prefer to check non-vulnerable pairs and fire vulnerable pairs more aggressively instead.

We’ve learned that it is good to know what a poker solver recommends. But the results might not always be the best strategy in practice after raising the flop. 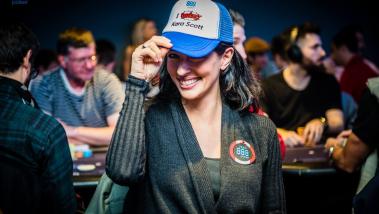