A Short Guide to Full Ring Poker – Live and Online

Full ring poker tables differ from short-handed games with 8 to 10 players at the table – with most having 9. Find out how to beat full ring games! 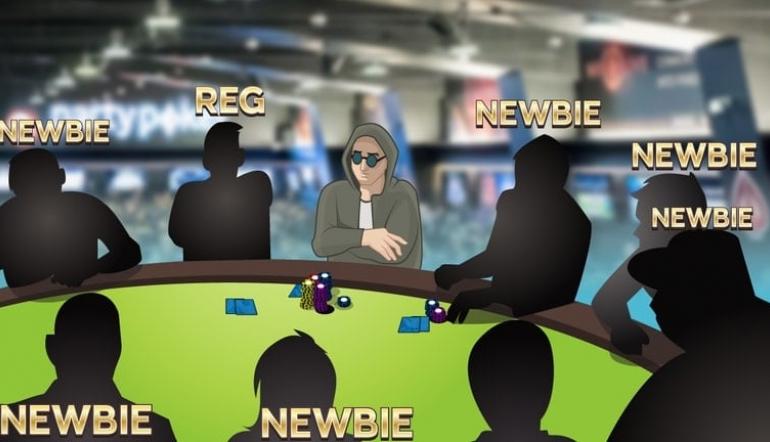 Full ring poker is a term used to describe any poker table with more than six players. Most full ring tables have exactly nine or ten seats although some online networks have been known to offer full ring games with eight seats per table.

This short guide will help us integrate into the world of full ring poker and, hopefully,even generate some profits.

The following list details what we’ll cover, so feel free to jump to the relevant section:

What is Full Ring Poker?

Full ring poker is a term used to describe any poker table with more than 6 players. Most full ring tables have exactly 9 or 10 seats although some online networks have been known to offer full ring games with 8 seats per table.

Once the number of players drops to six or less, the table is then a “short-handed” table. More specifically we might continue to describe the table as a full ring table (since it offers more than 6 seats) but refer to the action itself as short-handed.

There are a number of reasons why we might elect to play full ring tables:

Softer games – Regarding the online cash game scene, short-handed action has taken over. Most professionals flock immediately to the six-handed or heads-up tables. As a result, the weaker players are generally left behind at the full ring tables resulting in easier games.

Offered live by default – Full ring tables are much more common in live poker venues. In fact, we might have no choice but to sit down at a full ring table when playing live.

Standard tournament format – Full ring remains the most standard format offered in tournaments, both live and online. Short-handed tournaments do exist but are way less common than short-handed cash games.

Easier game format – Generally speaking, the more players at a table, the tighter the range of holdings we play. Full ring is a suitable format for beginners since there are fewer tough decisions on average.

Boosting traffic –When traffic is low, online professional players take all the action they can get. Just because their regular format is short-handed doesn’t mean they won’t jump on to a soft full ring table if it emerges.

Here is a quick guide for the seats at a full ring table:

Each seat at the table has a specific name based on its position relative to the button. The button is a small plastic disc that moves clockwise around the table after each hand. 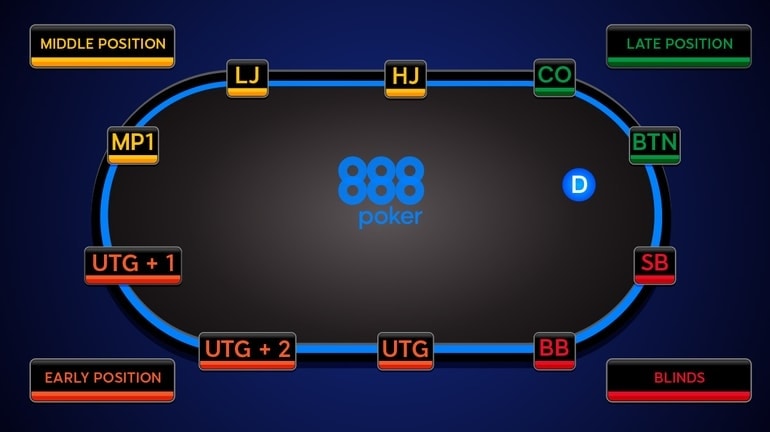 BB (Big Blind) – The BB is unique in that it has to make the mandatory preflop payment of 1 big blind before any cards are dealt. The BB will always be the last to act preflop. Postflop, the BB will usually act first but will act last specifically when playing against the SB. Since the BB closes the action preflop, it’s usually guaranteed to see a flop when calling. This position also gets an effective discount on preflop calls (1bb already invested) and typically calls against open raises significantly wider than any other seat at the table.

SB (Small Blind) – The SB is unique in that it has to make a mandatory preflop payment of half a big blind before any cards are dealt. The SB acts second to last preflop but always last postflop making it a non-favourable position at the table. The SB has to call open raises much tighter than the BB since it has to act behind. It’s generally not possible in either the SB or BB to generate a positive winrate since the forced blind payment is such a significant disadvantage. Professional players know that the objective is to try and lose as little as possible rather than hope to turn a profit.

BTN (Button) – The BTN is considered the best position at the table because it is guaranteed to always act last postflop. It is also in an ideal location for “stealing” the blinds posted by the SB and BB. As a result, good BTN players always look to open raise aggressively with a wide range of hands.

CO (Cutoff) – The CO is a decent position at the table (although nowhere near as strong as the BTN). The CO has a pretty good shot at being able to pick up the blinds preflop, but any steal attempt needs to go through the BTN first. Furthermore, if the BTN does decide to give a CO open-raise action, it means the CO is going to be OOP (out of position) postflop.

HJ (Hijack) – The HJ is the last of the three middle positions (the other two being LJ and MP1). As a general rule for the other positions, the earlier we get, the tighter the range of hands we’ll look to play.

LJ (Lojack) – The second of three middle positions. The LJ acts before the HJ preflop but after MP1.

MP1 (Middle Position 1) – The third of three middle positions. MP1 acts before the LJ preflop but after the UTG positions.

UTG, UTG+1, UTG+2 (Under the Gun) – The term “under the gun” means “first to act” in poker. It can technically apply to any position on the table that acts first. For example, at a 5-handed table, the HJ could also be referred to as UTG. The terms UTG+1 and UTG+2 describe seats in relation to UTG (UTG+1 to the direct left, UTG+2 two to the left). Sometimes the designation “EP” (early position) is also used to describe the seats to the right of the middle-position seats.

Not all positions at the table contribute to a player’s winrate in the same way.The later positions are the most crucial and where the majority of the action happens. Earlier seats usually get involved in the action only when they have a legitimately strong holding.

No matter how good a player is, the majority of winrate will nearly always come from the BTN and the CO.

Is there a general overriding difference between full ring and short-handed poker games? Well, for the most part, poker is still poker – there are more similarities than differences.

The most significant difference, however, is that full ring games play a lot tighter than short-handed games. 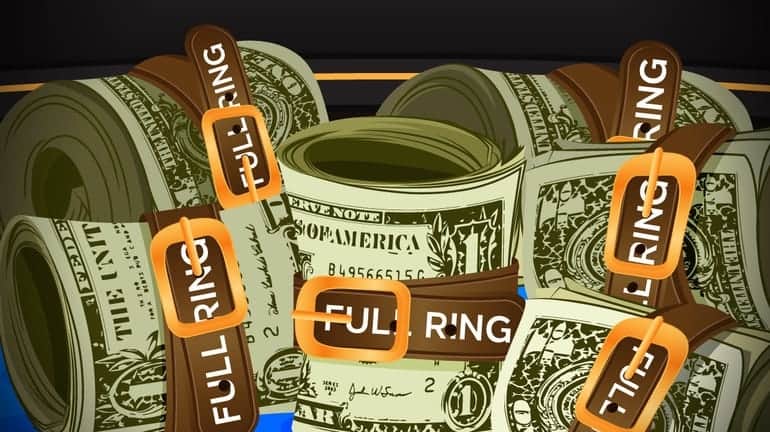 At any given moment, our full ring opponent is more likely to have a strong hand and a little bit less likely to be bluffing when compared to our short-handed opponent.

The relevant strategic adjustment is to give our full ring opponents more credit when they are representing that they hold something big. This fact is especially true when they are entering the pot from some of the earlier positions that don’t even exist on short-handed tables.

Full ring games should generally be more profitable than short-handed tables. Of course, the softer games come at a price. We must exercise a lot more patience and wait around for strong holdings compared to short-handed.

If we like to see lots of action, full ring poker might not be the best choice for us.

Let’s discuss a few of the differences. It will help us to understand which adaptions to make when switching between live and online full ring play. 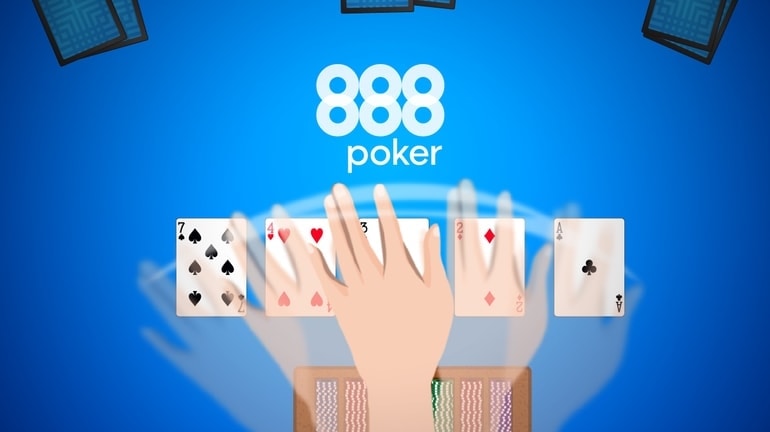 How big should we open raise in live full ring games? An important skill here is adapting to the table. Certain types of starting hands don’t play well multiway, meaning we want to avoid scenarios where we get a large number of callers. Take pocket Aces, for example. If we raise to 3bb and six players call, it’s going to be challenging to win a big pot with an overpair when any one of our opponents could have made two pair or better.

Our Aces much prefer to get one caller and go heads-up to the flop. We could try a 5bb open raise and see how many callers we get. If we still get several callers, we can increase our open-raise sizing further.

Every time we sit down in a new live full ring environment, our sizings will go through a period of calibration until we find the optimum sizing with different types of hand. Usually,it’s the tougher games that see players open raising smaller, in general (closer to how the online games play).

It’s no secret that there is a lot more open limping that occurs in live games relative to online games. A strong iso-raising strategy is more crucial in live games than online. (An iso-raise or “isolation raise” is where we raise preflop against a limper in the hopes of playing a heads-up pot against a weaker player).

Iso-raises will also need to go through a period of sizing calibration similar to figuring out the best open raise size. If players are not folding very much preflop, then very large iso-raise sizes can be incentivised.

The most important principle here is understanding which hands perform well in multiway pots and which don’t. Anything that has good potential to make the nut straight, flush or a full house will perform well in a multiway pot. This category includes holdings such as suited connectors, suited aces and mid to high pairs (provided they make a set).

Hands that prefer heads-up scenarios are big off-suit broadways and premium pocket pairs (JJ+, for example). We want to raise and attempt to narrow down the field before seeing a flop with these hands.

Just for clarity, hands such as JJ+ can do fine in multiway pots provided we play cautiously and try to hit a set. However, it’s usually still better we isolate the pot heads up where possible.One lone pair, unimproved JJ+holding can get us into a lot of trouble in a multiway scenario.

Besides, set-mining with a holding like Aces is typically a waste of a hand. We’d instead raise it big preflop for extra value. However, if we do ever find ourselves in a huge multiway pot with Aces, it’s usually best to try and hit a set before investing a large number of chips.

As a result, online full ring games can produce some scenarios where big hero-folds are incentivised preflop – including hands as strong as pocket Kings.

For example, we 3bet with KK against a tight UTG open and fold when facing a large 4bet. It might seem like a crazy fold, but if Villain only 4bets Aces, it could be right decision.

One reason why most online professionals play short-handed games is simply because full ring games don’t usually run above a specific limit. There may be regular traffic up until 50nl, but full ring games usually dry up at 100nl and higher. They will run every so often when a recreational player decides to start a table, but it certainly won’t produce enough tables to get in any decent volume. As a result, most serious players are forced to switch to short-handed.

We should, of course, be willing to jump on decent full ring tables when they appear, even if we consider short-handed games our speciality.