How to Turn Your Under the Gun Play into a Win

The term Under the Gun (UTG) is typically used in poker to indicate the player who is seated directly to the left of the player in the big blind. 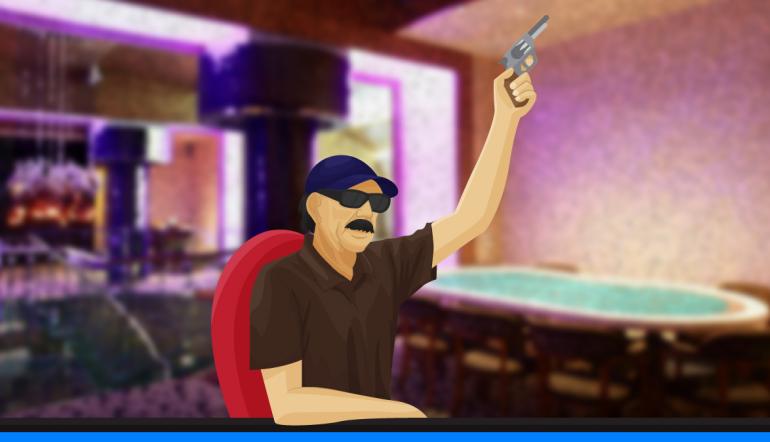 What is Under the Gun?

The term “Under the Gun” (often abbreviated “UTG”) is often used in poker to indicate the player who is seated directly to the left of the player in the big blind. In a normal hand, the player sitting in this position will be the first to act pre-flop and then third to act post-flop, assuming the small blind and big blind stay in the hand.

The player who is UTG will change from one hand to the next as the dealer button moves one position clockwise around the table at the end of each hand.

Where Does the Term Come From? A Brief History

There are two accepted histories of where the term “Under-the-Gun” comes from:

Other Versions of “UTG” Titles

In a regular 9-handed game, the first 2-3 positions of a poker hand are often referred to as early position (EP). (The first player to act preflop would be considered EP1; the second player would be regarded as EP2, etc.).

As a result, calling someone EP1 and/or UTG is the same thing. Additionally, the player in EP2 could also be considered UTG+1 (“Under-the-Gun plus one”).

Generally, table positioning beyond UTG+2 isn’t referenced using “Under-the-Gun”-based abbreviations, as these players have their own titles (see section below).

Player Titles in a Poker Hand Based on Position

Listed below in the chart are the titles of the various player positions at a 9-handed poker table.

The chart will start with the player seated to the left of the dealer button and proceed clockwise.

“Under-the-Gun” is not only for 9-max games; the term is also used in 6-max games to represent the player to the left of the big blind. (In this case, according to the chart above, the player in the Lojack would be considered UTG in a 6-max game.)

If the game gets any more shorthanded than that (i.e. 4-5 players), the term Under-the-Gun is more often substituted with the regular player titles (Hijack/Cutoff) for players who would find themselves in the position to the direct left of the big blind.

Once the game becomes 3-handed or heads-up, the title of UTG is never used.

Special Plays for UTG: The Straddle

A straddle is essentially a third blind (bigger blind) added into a hand of poker and is most often 2x the amount of the big blind. While some casinos allow a player to straddle from any position, the most common form of straddle comes from the player who’s Under-the-Gun.

Once a straddle has been placed forward (before any cards are dealt), preflop play begins with the player to the left of the straddler; as a result, the player who straddled will be the last player left to act pre-flop. Post-flop play continues as usual in a straddled pot.

NOTE (1): Straddles from UTG are usually –EV due to putting money in blind and doing so from a position that has such a post-flop disadvantage. However, they do traditionally help promote action and loosen up a table.

NOTE (2): It should also be noted that, essentially, straddling halves all player’s effective stacks at the table in terms of big blinds, creating shallower post-flop stack-to-pot ratios.

For reasons of positional disadvantage (both preflop and post-flop), it is often recommended that players who are seated in the position of UTG have the tightest starting hand range to compensate for this aspect.

In a 9-handed game, for example, it’s recommended that you open only about 10% of starting hands from UTG. 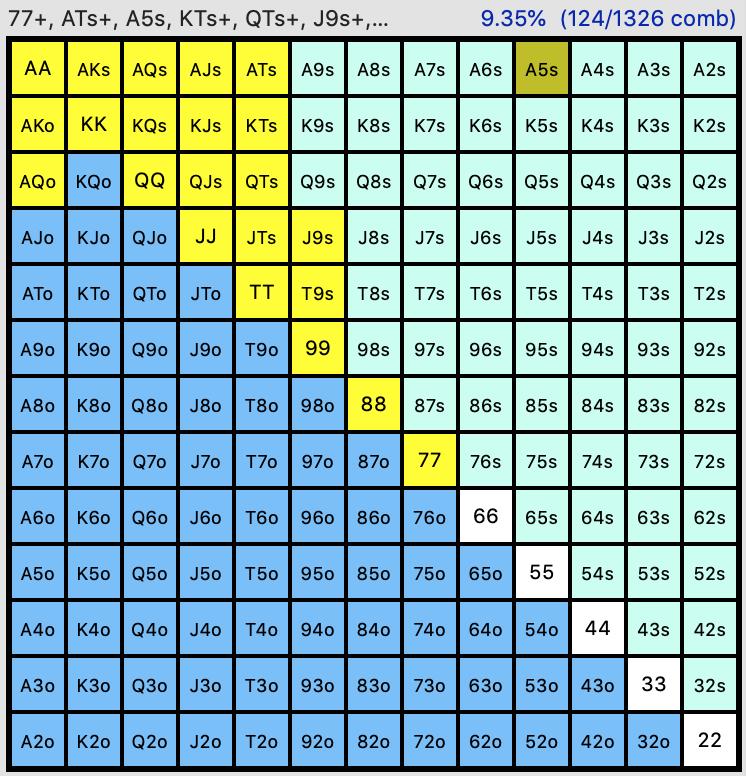 In a 6-handed game, playing Under-the-Gun would mean that you’re playing in the Lojack position; therefore, you have fewer players left to act behind.

As such, it’s usually acceptable to open up about 15% of all possible starting hands, which might look something like this:

Additional strategic considerations or things to remember from UTG might include the following:

The primary strategy to be applied to a poker game specifically for UTG play (the player seated to the left of the BB in NLHE and PLO) is to open-raise a very tight selection of hands, as outlined above, and also opt not to straddle, even if the option is available.

Also, keep in mind that UTG for 6-max does not mean the same as UTG in a full-ring game (as you could undoubtedly confuse your range calculation and strategies used in-game).

With those tips in mind, good luck at the felts, specifically for the next time you find yourself…Under-the-Gun!

Beginner
Cash
Tournament
About the Author
By
Matthew Cluff