What is Razz in Poker?

Find about the poker variant named “Razz” along with all of the associated rules and beginner guidelines on strategy. 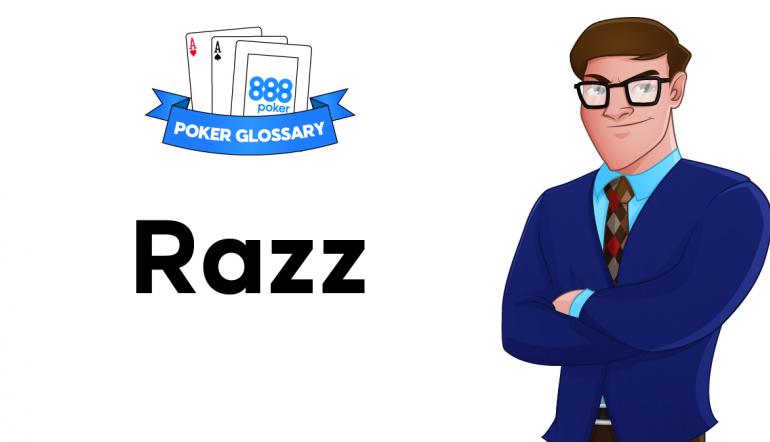 Razz is the lowball version of seven card Stud. Stud games predate community card variants such as Hold’em and Omaha by a considerable number of years. Before Hold’em was even on the scene, limit Stud was the average poker player’s game of choice.

Razz follows almost identical rules to Stud apart from different criteria for made hands at showdown (since it is a lowball format). In Razz the nuts is A,2,3,4,5 since Aces are always treated as low. Straights and flushes are ignored, but pairs count against the strength of our hand. Unlike most high-hand variants, the rules for qualifying low hands may change based on the variant. See the glossary entry under low hand for more information on this.

Let’s follow a hand of Razz through from the beginning and get a feel for the flow of action.

1. Antes are paid and each player is dealt three cards, two down-cards and one up-card. An “up-card” is visible to the rest of the table while down-cards are only visible to the player who holds them (similar to hole-cards in Hold’em or Omaha). By this stage all players will have invested an ante payment to begin building the pot.

2. The player with the weakest (highest in Razz) up-card has to “bring-in” the action. A player with a King would hence have to act first on the first betting round (known as third street). In the scenario where two players share the same lowest up-card, the ranks are broken down further by suit. The suits are ranked in alphabetical order i.e. clubs, diamonds, hearts and spades, with clubs being the lowest. Hence if player 1 has the King of hearts while player 2 has the King of diamonds, then player 1 has the bring in the action since his King is of a weaker suit (remember that stronger/higher cards are weaker in a lowball format).

The betting action proceeds based on the standard legal options outlined in the glossary entry under action and proceeds in a clockwise direction. Since Razz is typically played with a fixed limit betting structure it means there is a cap on how many raises can occur on each street. See the glossary entry under structure for more information on this.

3. A second up-card is dealt to every player at the table and the fourth street betting round commences.

The flow of action now begins from the player with the strongest (lowest) up-cards and will continue to do so on every subsequent street. On fourth street players are forced to use the small-bet sizing. In regular Stud games there is an exception where a player has an exposed pair as his two up-cards and is allowed to select the big-bet sizing. This ruling does not apply to Razz meaning that the small-bet sizing will always be used.

4. A third up-card is dealt to every player at the table and the fifth street betting round commences.

On fifth street, action occurs in increments of the big-bet regardless of the strength of any player’s up-cards. Using the small-bet sizing is no longer an option.

5. A fourth up-card is dealt to every player at the table and the sixth street betting round commences.

Once again, players are forced to use the big-bet sizing on this street. At this stage, every remaining player has 2 down-cards and 4 up-cards.

6. A final down-card is dealt to every player at the table and the seventh street betting round commences.

The final betting round occurs in increments of the big-bet sizing. After the betting action on seventh street (sometimes referred to as the “river”) showdown is reached and all players remaining in the hand must reveal the strength of their holding. The best (lowest) hand wins the pot.

Razz can be played with up to 8 players at the table, and simple maths reveals that there might not be enough cards in the deck for everyone. If 8 players all have 7 cards then 56 cards are required, with a standard deck only containing 52 cards. This scenario almost never happens however since at least one (but usually most) of the players will have folded on an earlier street. In the unlikely event that all 8 players are still involved in the hand by the river, the final card is instead dealt as a lone community card which all players can use to construct a 5-card hand.

Note that Razz can also be played in a hi/lo split pot format as well as the regular high-only version known simply as Stud.

Example of Razz used in a sentence -> Aside from the lowball hand rankings Razz is almost identical to seven card Stud.

How to Use Razz as Part of Your Poker Strategy

One factor that separates Razz from community card variants is the sheer amount of information displayed on the table in any one moment. A good player looks at all of his opponents’ up-cards and weighs up relevant card removal effects.

As a quick example imagine we are dealt (2♣3♠)5♣ on third street. This hand has potential but its actual strength will vary based on which up-cards are already out there on the table. Ideally we’d like as few players as possible to have the Ace or Four as up-cards. The more Aces and Fours already out there in our opponent’s hands the less likely it is that we make a strong low by the river.

Our opponent’s board can give a lot of information about the strength of his holding. For example, if our opponent holds the following board (xx)A♣3♣4♦7♥(x) it should be pretty obvious that there is a high possibility of our opponent having a strong made low. If he has any Two or Six as down-cards he has made the Seven-Low which is a strong hand in Razz.

Even our own board may give us clues regarding the strength of our opponent’s holdings. If our own board indicates that we might have made a strong made hand, aggression from our opponent should be treated with more respect. If he is still content to play aggressively despite the realisation that we could be very strong, the likelihood is that he has an even stronger hand himself.

Like other variants of poker it makes sense to start out on the first betting round with a relatively tight range of holdings. The only thing that matters in Razz is holding 3 cards as low as possible.