Online Poker Tells: Every One You Need to Know

You don’t need to ‘see’ a player to be able to read them. Most online players are a mass of tells – you just have to know what to look for… 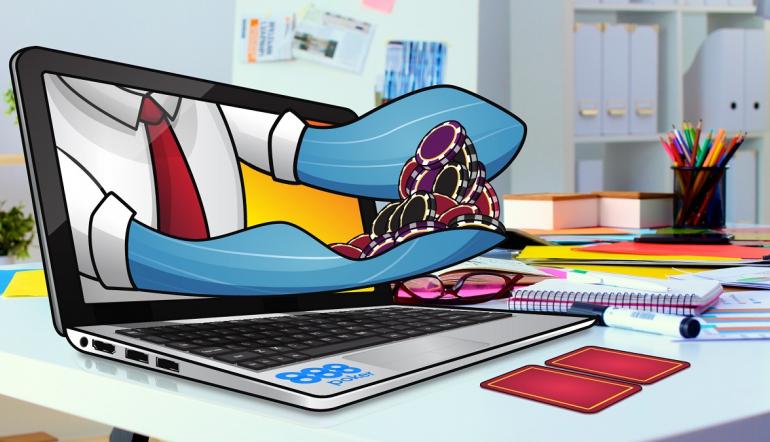 When playing poker live, ‘poker tells’ such as shaking hands, a dry gulp, the tone of a player’s voice, or even what they’re wearing, can all be used to decipher the strength of an opponent’s hand, or their overall skill level and experience. When it comes to online poker, though, the general perception is that due to the lack of physical poker tells, the only reads you can get are to do with betting patterns and the previous behaviour of your opponents, and that those poker tells are somewhat unreliable at best. We don’t subscribe to that line of thinking at all – and neither should you. Online poker tells definitely exist and if you’re paying attention, you can cash in…

1. The speed of your opponent’s call

Your opponent calls your bet for one of a number of reasons: either he’s trapping, drawing, unsure if he’s ahead, or floating. When called, you need to figure out which it is, and the speed of your opponent’s flop call will often be the biggest clue. Trappers tend to convey weakness by pausing before they call. A floater will often have to take a second to think through his play. And those on a draw, or who are unsure, will often show strength by calling quickly, as if to convey to you ‘that I was calling no matter what’.

2. The quick re-raise preflop
When Player A raises and Player B re-raises very quickly, it means, with a great degree of reliability, that Player B has an extremely strong hand. The very quick re-raise usually means Q-Q, K-K, A-A or A-K. In the event that Player B had J-J, A-Q or worse, the initial raise would cause him to pause, if only for a fraction of a second, before proceeding to three-bet.

3. Use of the pre-action Check/Fold button

Your lazy opponent who uses this button is weak. You’ll see the instant check from the big blind preflop and then on the flop, and it’s time to bet, no matter what you’re holding. In the rare event that someone uses the pre-action check button, but then raises your bet, fold all but the strongest of poker hands – your opponent usually has a monster.

Your opponent is trying to show strength by telling you he had a tough decision between betting and checking. Don’t buy it! Most of the time he has nothing and is trying to get a free card.

This is the opposite of the last poker tell. This time your opponent is trying to show weakness by making it look like he had a tough decision between betting and checking. He’s got the goods, and you need to have a very good reason to continue in the hand.

This is less reliable than the long pause, but a fast check also usually indicates weakness, as most check-raise attempts take at least a fraction of a second to plan. Bet at will, but be prepared to fold to a check-raise and be cautious on the next street if your opponent takes a long time, then calls.

A very quick bet on the flop by the preflop raiser is often an automatic continuation bet. You can defend against this with a check-raise bluff or a floating play. Other times, though, it indicates some degree of strength, because if your opponent is bluffing he will spend at least half a second thinking it through. Expect your opponent to have a strong hand, but probably not a monster, because those with monsters often pause for effect to show weakness.

1. Avatar of a training site, poker forum, or an online or lesser-known poker pro

If someone has this kind of avatar you’ll often be up against someone with a decent level of experience. Expect them to select good starting hands and make good decisions, until they show you otherwise.

It’s likely that Aces75 was born in 1975. Older players are generally tighter and less aggressive, and certainly less likely to overvalue a marginal hand. Young players are often throwing chips in your face at every opportunity. Mary2013 likely created her name in 2013 and probably has three years’ experience, but may not be a woman called Mary!

3. Avatar of a child, wife, girlfriend or family pet

Your opponent is more likely to be playing recreationally, and is less likely to be a shark. In addition, the age of the child or girlfriend/wife in the photo gives an indication to the player’s age.

4. Avatar of a predator

Your opponent sees themself as the shark or grizzly bear that they have as their avatar. They are predatory in nature. Don’t expect to get too many free cards.

5. Avatar of an opponent wearing sunglasses or staring you down

Your opponent is concerned with his image and will go to great lengths to avoid looking stupid.

6. Trickery used in a name or avatart

Most experienced players don’t engage in much conversation. So you should expect any opponents that constantly chat to not be very savvy.

3. Idle chatter by someone in the big blind

This is a sign that the big blind doesn’t have a big hand. Someone with A-A will not be idly chatting, but will pay attention to the action. In contrast, the chatterbox who suddenly goes very quiet has a real hand.

4. A player bemoaning their bad luck

Someone who is crying about variance or luck is likely on tilt, or close to it. This is a player who blames everything but themself for their losses and feels snakebit. They fail to understand or accept that variance is part of the game, and are concentrating on their results, rather than their decisions. Prey on their fears by betting a scare card when it comes; more often than not you’ll frighten them off as they’ll think they’ve just been ‘screwed again’.

5. A player commenting on your hand selection

If an opponent says, ‘How can you play those rags, donkey?’ it usually means that he feels he plays ‘the right way’, which is straightforward, tight and passive in his eyes. Look to bet when he checks and exploit his weaknesses, but be aware that when he enters the pot he has a good starting hand.

Your opponent is the ‘professor’ type, and will tell you his entire strategy if you ask him. Tell him how great he is at poker, and ask him for advice after every hand that you play. He’ll gladly tell you what he would have done.

1. Buying in with weird amounts

An opponent who sits down with $40.75 is probably putting his whole poker bankroll on the line. Don’t leave until it’s gone. He’s playing with scared money.

2. Failure to wait for the big blind

This means your opponent is impatient. Expect him to get involved quickly. He is an action player.

Experienced players will often fake some poker tells, especially in cash games, so be wary and keep good notes. Each tell is not 100% reliable, but it can often be just reliable enough to sway your decision in a hand, helping you to save a few bets or extract more.