Avi Rubin dissects a hand where he holds Jack-Ten suited out of position. Learn from this professor of Computer Sciencethe nuances of playing a draw OOP. 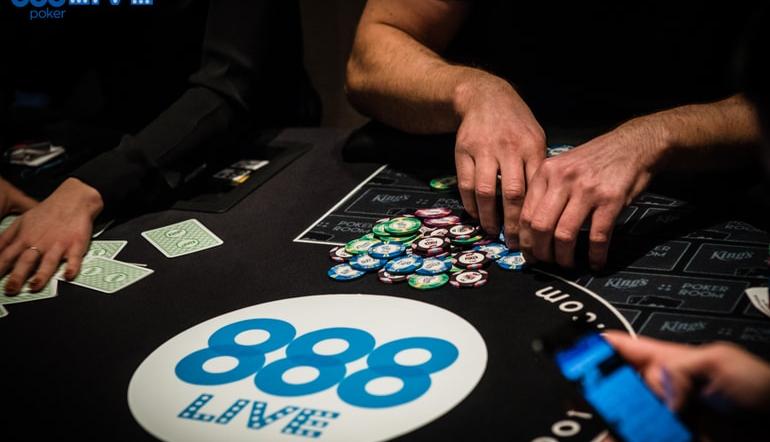 Big drawing hands can be tricky to play out of position. So, I’m using a real-life example to break it down. I’ll express and explain what I was thinking throughout to use as a teaching aid.

Let’s dissect a hand I played last year at 2-5 at Maryland Live! in Baltimore. You may not agree with the way I played this hand, nor with my reasoning.

But that is the beauty of poker.

There are different ways to analyse the same situation. More than one of them can be correct, although some are flat out wrong.

Reasonable minds will disagree. And that’s what makes it interesting.

It’s a 2-5 game, and my stack is $800. The table has been aggressive with some very strong players. I know three of them as local pros.

The Villain (V) in this hand has me covered. He is a full-time grinder who loves to steal pots and likes to intimidate his opponents with his play.

I’m in the big blind with

The action folds to V in middle-position.

I would call with any decent hand in this spot, and TJ suited is obviously strong enough. Before I make an automatic play, though, I like to consider my options.

I think a raise would be a mistake here. A hefty raise, a squeeze, in this case, would possibly take down a small pot.

But there are two other possible outcomes.

So, I believe a call is in order and is, in fact, the only good play.

The action is closed, and we see the following flop:

That’s a beautiful looking flop for my hand. I have flopped an open-ended straight draw and a flush draw. I am first to act, and I weigh my choice of leading out or checking.

Betting is not a crazy play because I want to build a pot. If I hit one of my draws, I win a big one. But I am not a fan of the donk bet (betting out into a pre-flop raiser) here.

Given what I know about this player, he is highly likely to continuation bet (cbet). Also, I don’t have a hand yet.

So, if everyone checks, I get to see another card. An 8 or a K on the turn is unlikely to set off too many alarm bells.

Before I decide what to do, I like to think about what my opponent can have –

Let me consider my equity against his possible holdings. I use poker cruncher on the iPhone for these calculations –

These calculations can be misleading. While I may have express odds to call, the poker cruncher percentages assume that I will see two cards.

In fact, my likelihood of hitting on the turn is half of the equity that I get from the app. If I call the turn and miss, and he shoves, I will not have the odds to call another bet.

But my implied odds are tremendous. The stronger Villain’s hand, the higher my implied odds. With almost six times the pot in my stack, I’m hoping he has two pair or a set.

Even though I’m behind right now, if I hit my hand (and he does not improve to a boat or quads), I should win massively.

Okay, so I’ve ruled out folding. Yeah, that was kind of obvious.

But do I call or raise?

Well, I am out of position, and if I call, I will miss my draw 70% of the time. If Villain has a made hand, he will bet the turn on such a wet board. So,  I may not get the odds I need to call. I also know he’s capable of a two-street bluff. So, I don’t want to give him that chance.

So, the question is, how much to raise?

What about if I raise it  to $195 and he calls? This decision is a tough one.

What about a smaller raise such as 2x?

If you run through the maths, it plays out about the same. But I think Villain might find a fold with a Q to the 3x bet and not the 2x bet.

What if I shove the flop?

So, his decision might be for the amount of all my remaining chips. He could even fold top pair top kicker (TPTK) to a 4.5x raise.

Poker pro and Poker PowHer instructor Amanda Botfeld adds a good argument for check-raising here. The cards that make my hand are mostly scare cards, the king and the spades.

So, by taking the betting lead, I don’t have to worry about those cards killing my action. And, if we end up all-in, at least I’m getting paid in full.

Check-raising this big draw also balances my play for the times that I do flop a set or two pair.

Drawing Hands and The Power of Position

Drawing Hands and The Power of Position

At this moment, I could feel the power of position. I was extremely uncomfortable knowing that unless I hit my draw on the turn, this hand was going to be extremely challenging to play. This thought was especially poignant when up against a strong, aggressive opponent.

I’ll go broke if he has a bigger flush.

That is an ugly card! My options are check, bet small, bet big, shove.

Let’s examine each one.

So, what is the best play?

In hindsight, I like the $400 bet. It applies pressure and gets some better hands to fold. It keeps me in the hand if he shoves, and saves me $220 if he calls, and I miss the river.

Bet Sizing Draws on the Turn

But I did not have the luxury of all this planning during the heat of the battle.

I showed some weakness with my small turn bet. I think he’s pot committed and unlikely to fold a better hand.

If I check and he bets, I suppose I have to fold.

I don’t see what I could be beating that would bet the river behind me. If V has a lone 9, he’ll check behind. Many of his queens will also check behind. If he bets,

So, I checked. Villain goes into the tank, and I believe it’s an act, and he’s going to shove with a set or two pair. I plan to fold and be grateful I still have $445 in my stack.

But, to my surprise, he checks. I show my hand kind of sheepishly,

To my amazement, he says, “nice hand”, and mucks his cards.

JTs Post-River – Breaking It Down

I spent hours going over this hand with friends and thinking about it. I concluded that he probably had AK of spades. Any queen beat me, and no other combo-draw make sense, given my cards.

AK of spades fits every street.

Raise preflop>>>bet on the flop>>> and call a raise with the nut flush draw and two overcards.

On the turn, Villain called my smallish bet to see a cheap river. And he checked back the river when he missed, knowing he was no good there. But he probably did not imagine that I made my hand on the river that way.

He undoubtedly missed a bet, but it would have been a seriously tough play to try to bluff me there. Given my small turn bet and river check, he might have considered it,

But he also might have felt his high cards had a little bit of showdown value.

This hand shows just how many decisions there can be in a poker game with somewhat deep stacks. I got lucky this time. But I undoubtedly misplayed the turn and bet too small on the flop.

I could have easily had this pot stolen from me.

Villain did not play that well either. If we look at the hand from his perspective, I made a small raise on the flop and a down bet on the turn.

Villain should have thought about me as his opponent and concluded:

Given my plan to make a blocking bet and then fold to a raise, it would have worked. And even if I had a one-pair hand, I probably fold to a shove there.

My actions told precisely the story that was true.

I did not have a strong, made hand, and I did not play like I did.

Lucky for me, he was not as good as I initially thought he was, and he let me off easy.

I could tell he realised it when he saw my hand. 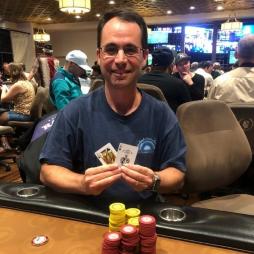